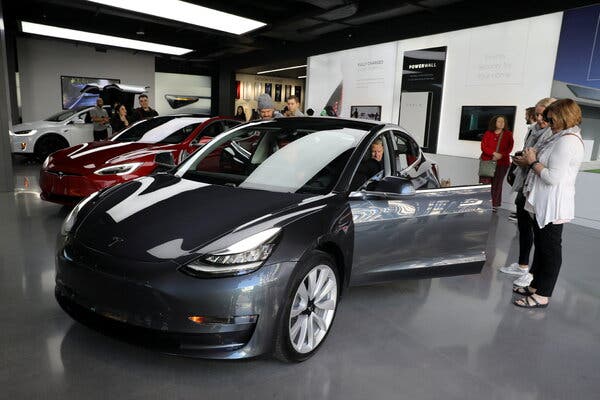 E.S.G. gets a loud critic

Elon Musk is the latest prominent figure to push back on one of the hottest trends on Wall Street and in corporate America: E.S.G., the idea of valuing companies based on how they follow environmental, social and governance principles, rather than just chasing profits. Musk called E.S.G. a “scam” after S&P Global, the manager of a popular E.S.G. index, publicized that it had kicked Musk’s electric car company Tesla out of the index, The Times’s Jack Ewing and DealBook’s Stephen Gandel report.

Musk complained on Twitter that S&P gave high marks to Exxon Mobil, one of the world’s largest producers of fossil fuels, “while Tesla didn’t make the list!” He added: “E.S.G. is a scam. It has been weaponized by phony social justice warriors.”

E.S.G. has been facing a growing backlash. Earlier this month, former Vice President Mike Pence, a potential 2024 Republican presidential contender, said he wanted to rein in E.S.G., claiming it elevated left-wing goals over the interests of businesses and their employees. BlackRock, an outspoken leader in sustainable investing, has said it would support fewer shareholder proposals on climate issues because many are too “prescriptive.” And earlier this year, the private equity executive Steve Schwarzman, among others, blamed E.S.G. for creating a credit crunch for energy companies, which he said was a contributor to the soaring price of oil.

Part of the problem is that E.S.G. is not well defined. Shortly after Russia invaded Ukraine, two Citigroup stock analysts argued that weapons manufacturers and defense contractors should qualify as E.S.G. investments, because their products helped defend democracy and preserve peace. Others called that absurd.

For S&P, there is more to consider at Tesla than just its environmental record. S&P said it also factored in things like allegations of racial discrimination and poor working conditions, as well as Tesla’s handling of investigations into Autopilot crashes. “Tesla is just simply not an open-and-shut E.S.G. case,” Jon Hale, who directs sustainability research at the mutual fund tracking firm Morningstar, told DealBook. “While it’s clear the company’s product is beneficial to the environment, Tesla is now a big company and it also has an impact on employees and customers, and those issues concern E.S.G. investors.”

What is E.S.G. for, anyway? Some of the E.S.G. pushback falls along predictable political lines. But there also seems to be confusion over the broader goals of the approach, even among its fans. The older approach of so-called socially responsible investing meant steering clear of tobacco companies, gun makers and other businesses that profit in morally questionable ways.

The E.S.G. approach, by contrast, is less focused on whether a company’s products are good for society. A core principle is that businesses whose managers care broadly about issues like the environment and diversity will produce solid investment returns. That explains how Exxon can end up in an E.S.G. index, if its leaders are seen to be taking serious steps to reduce its environmental impact, and how Tesla might not, despite the millions of gallons of gas its cars are not burning. The nuance there is easily lost on, say, Twitter, where in a later tweet Musk called Tesla’s removal “a clear case of wacktivism.”

Melvin Capital, the hedge fund torpedoed by the GameStop frenzy, shuts down. Gabe Plotkin, who founded Melvin in 2014, wrote to his investors that the “appropriate next step” was to liquidate the fund’s assets and return their cash. Plotkin gained fame as one of the most successful portfolio managers to emerge from Steve Cohen’s former hedge fund, SAC Capital.

Wells Fargo’s efforts to increase diversity lead to fake job interviews. Seven current and former Wells Fargo employees said their direct bosses or H.R. managers had told them to interview Black and female candidates even though the decision on who to hire had already been made.

Homeland Security suspends its disinformation board. The group, which was formed to help counter viral lies and propaganda, was put “on pause” weeks after its creation. It had set off criticism about government overreach, particularly from the right, and its leader was subject to online attacks.

President Biden invokes defense powers to ease the baby formula shortage. Biden said he would deploy Defense Department planes to speed formula shipments into the U.S. His decision came as the formula shortage was threatening to become a political disaster for the administration.

Men and women soccer players representing the U.S. internationally will get equal pay. The agreement was reached just over six years after a group of stars from the World Cup-winning U.S. women’s national team began a campaign to overcome what they said was years of wage discrimination.

Inflation and the market meltdown

Even as inflation intensified in recent months, the economy chugged along, fueled by spending from consumers made flush by government stimulus and a hot job market. Now that engine of growth appears to be stalling. DealBook turned to our colleague Peter Coy, a veteran journalist and the author of a Times newsletter on the economy, to make sense of what’s happened to corporate pricing power and why investors are so spooked. Here are his thoughts.

On inflation: We hear a lot about “greedflation,” which is where companies cause inflation by jacking up prices. I said in The Argument podcast this week that it’s not quite like that. Companies are opportunistic. High inflation can give them cover to put through price increases. But those increases are more an effect of inflation than the main cause. And there’s a limit to how much they can push through. The scary earnings reports from Target and Walmart this week are pretty clear evidence of that.

On retailer profits: Getting inventories right is incredibly hard. When the shelves are empty, retailers over-order and then they have too much. On the bright side, this could be good for consumers, because the retailers will have to cut prices to move the merchandise.

On the risk of recession: I’ve been writing in my newsletter that the risk of recession is high. The low unemployment rate doesn’t protect us against recession. In fact, recessions usually begin right when the jobless rate is near its low point. The Federal Reserve has suddenly gone from dovish to hawkish, and investors are belatedly realizing that this is going to be pretty bad for stocks.

Securing financing. Though his original offer had scant details and was received skeptically by Wall Street, Mr. Musk has been moving swiftly to secure commitments worth $46.5 billion to finance his bid, putting pressure on Twitter’s board to take his advances seriously.

Will the deal go through? For the purchase to be completed, shareholders have to vote and regulators have to review the offer first. Scrutiny is likely to be intense and questions remain about Mr. Musk’s plans for the company, especially after he suggested he needs more information on spam and fake accounts on Twitter for the deal to proceed.

The sliding stock market is also turning off the millions of amateur investors who got into trading in the pandemic’s bull market. Some are scrambling to adopt defensive positions, and others are cashing out altogether.

“Most companies — and us, in some cases — are keeping people who wouldn’t be on the team in a looser market. The standards would be higher.”

— David Cancel, C.E.O. of the Boston-based marketing firm Drift, on how hard it is to get fired right now.

Dark days ahead for Russia

The Russian economy is surprisingly stable right now, given the country’s isolation since its invasion of Ukraine. The central bank was recently able to lower interest rates to 14 percent from 19 percent. The ruble is at its highest level in more than two years. And high oil prices have buffered the impact of sanctions, which have forced the government to sell crude at a steep discount.

But the situation is likely to get far worse,The Times’s Patricia Cohen and Valeriya Safronova write.Forecasters expect continued severe inflation and a deep downturn: The central bank predicts a staggering inflation rate of between 18 and 23 percent this year, and a falloff in total output of as much as 10 percent. ​​“The really hard times for the Russian economy are still in front of us,” said Laura Solanko, a senior adviser at the Bank of Finland Institute for Emerging Economies.

Some Russian businesses and workers are feeling the distress. Ivan Khokhlov, who co-founded 12 Storeez, a clothing brand with 1,000 employees and 46 stores, is contending with the problem firsthand. “With every new wave of sanctions, it becomes harder to produce our product on time,” he said. The company’s bank account in Europe was blocked because of sanctions shortly after the invasion, while logistical disruptions forced him to raise prices: “As logistics with Europe gets destroyed, we rely more on China, which has its own difficulties too.”

Russia can’t necessarily rely on oil and gas sales to prop things up. Europe’s vow to eventually turn its back on Russian oil and gas will compel Moscow to look to places like China and India for customers. But the pivot to Asia, said Daria Melnik, a senior analyst at Rystad Energy, “will take time and massive infrastructure investments that in the medium term will see Russia’s production and revenues drop precipitously.” A U.S. effort to push Russia out of its central role in global energy supplies could further delay any recovery.

At Wells Fargo, a Quest to Increase Diversity Leads to Fake Job Interviews

Puberty Starts Earlier Than It Used To. No One Knows Why.

Featured Posts
How G.O.P. Support for Decriminalizing Abortion Faded Over Decades
45 mins ago

As Wimbledon Begins, an Era of Sports Free of Bans and Boycotts Ends
8 hours ago