OREGON HOUSE, Calif. — In a tiny town in the foothills of the Sierra Nevada, a religious organization called the Fellowship of Friends has established an elaborate, 1,200-acre compound full of art and ornate architecture.

More than 200 miles away from the Fellowship’s base in Oregon House, Calif., the religious sect, which believes a higher consciousness can be achieved by embracing fine arts and culture, has also gained a foothold inside a business unit at Google.

Even in Google’s freewheeling office culture, which encourages employees to speak their own minds and pursue their own projects, the Fellowship’s presence in the business unit was unusual. As many as 12 Fellowship members and close relatives worked for the Google Developer Studio, or GDS, which produces videos showcasing the company’s technologies, according to a lawsuit filed by Kevin Lloyd, a 34-year-old former Google video producer.

Many others staffed company events, working registration desks, taking photographs, playing music, providing massages and serving wine. For these events, Google regularly bought wine from an Oregon House winery owned by a member of the Fellowship, according to the lawsuit.

Mr. Lloyd claimed he was fired last year because he complained about the influence of the religious sect. His suit also names Advanced Systems Group, or ASG, the company that sent Mr. Lloyd to Google as a contractor. Most of the Google Developer Studio joined the team through ASG as contractors, including many members of the Fellowship. 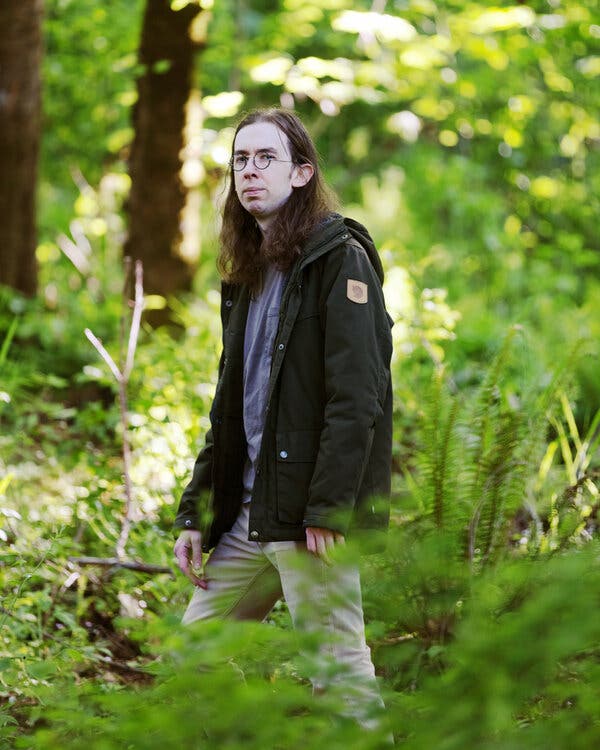 Kevin Lloyd is suing Google and Advanced Systems Group, the contractor that sent him to Google.Credit…Will Matsuda/The New York Times

The suit, which Mr. Lloyd filed in August in California Superior Court, accuses Google and ASG of violating a California employment law that protects workers against discrimination. It is in the discovery stage.

The New York Times corroborated many of the lawsuit’s claims through interviews with eight current and former employees of the Google business unit and examinations of publicly available information and other documents. These included a membership roster for the Fellowship of Friends, Google spreadsheets detailing event budgets and photos taken at these events.

“We have longstanding employee and supplier policies in place to prevent discrimination and conflicts of interest, and we take those seriously,” a Google spokeswoman, Courtenay Mencini, said in a statement. “It’s against the law to ask for the religious affiliations of those who work for us or for our suppliers, but we’ll of course thoroughly look into these allegations for any irregularities or improper contracting practices. If we find evidence of policy violations, we will take action.”

Dave Van Hoy, ASG’s president, said in a statement that his company believed in “the principles of openness, inclusivity and equality for people of all races, religions, gender identification and above all nondiscrimination.”

“We continue to deny the plaintiff’s baseless allegations and expect to vindicate ourselves in court soon,” he added.

Founded in 1970 by Robert Earl Burton, a former San Francisco Bay Area schoolteacher, the Fellowship of Friends describes itself as an organization “available to anyone interested in pursuing the spiritual work of awakening.” It claims 1,500 members across the globe, with about 500 to 600 in and around its compound in Oregon House. Members are typically required to give 10 percent of their monthly earnings to the organization.

Mr. Burton based his teachings on the Fourth Way, a philosophy developed in the early 20th century by a Greek Armenian philosopher and one of his students. They believed that while most people moved through life in a state of “waking sleep,” a higher consciousness was possible. Drawing on what he described as visits from angelic incarnations of historical figures like Leonardo da Vinci, Johann Sebastian Bach and Walt Whitman, Mr. Burton taught that true consciousness could be achieved by embracing the fine arts.

Inside the organization’s Northern California compound, called Apollo, the Fellowship staged operas, plays and ballets; ran a critically acclaimed winery; and collected art from across the world, including more than $11 million in Chinese antiques.

Robert Earl Burton, the founder of the Fellowship of Friends, in its compound in 1981.Credit…Gary Fong/San Francisco Chronicle via Getty Images

“They believe that to achieve enlightenment you should surround yourself with so-called higher impressions — what Robert Burton believed to be the finest things in life,” said Jennings Brown, a journalist who recently produced a podcast about the Fellowship called “Revelations.” Mr. Burton described Apollo as the seed of a new civilization that would emerge after a global apocalypse.

The Fellowship came under fire in 1984 when a former member filed a $2.75 million lawsuit claiming that young men who joined the organization “had been forcefully and unlawfully sexually seduced by Burton.” In 1996, another former member filed a suit that accused Mr. Burton of sexual misconduct with him while he was minor. Both suits were settled out of court.

The same year, the Fellowship sold its collection of Chinese antiques at auction. In 2015, after its chief winemaker left the organization, its winery ceased production. The Fellowship’s president, Greg Holman, declined to comment for this article.

The Google Developer Studio is run by Peter Lubbers, a longtime member of the Fellowship of Friends. A July 2019 Fellowship directory, obtained by The Times, lists him as a member. Former members confirm that he joined the Fellowship after moving to the United States from the Netherlands.

At Google, he is a director, a role that is usually a rung below vice president in Google management and usually receives annual compensation in the high six figures or low seven figures.

Previously, Mr. Lubbers worked for the staffing company Kelly Services. M. Catherine Jones, Mr. Lloyd’s lawyer, won a similar suit against Kelly Services in 2008 on behalf of Lynn Noyes, who claimed that the company had failed to promote her because she was not a member of the Fellowship. A California court awarded Ms. Noyes $6.5 million in damages.

Ms. Noyes said in an interview that Mr. Lubbers was among a large contingent of Fellowship members from the Netherlands who worked for the company in the late 1990s and early 2000s.

At Kelly Services, Mr. Lubbers worked as a software developer before a stint at Oracle, the Silicon Valley software giant, according to his LinkedIn profile, which was recently deleted. He joined Google in 2012, initially working on a team that promoted Google technology to outside software developers. In 2014, he helped create G.D.S., which produced videos promoting Google developer tools.

A 2015 photo showing Mr. Burton, center; Peter Lubbers, second from left, a Fellowship member who runs the Google Developer Studio; and Gabe Pannell, third from left, who joined GDS. The photo was posted to the internet by Mr. Pannell’s father.

Under Mr. Lubbers, the group brought in several other members of the Fellowship, including a video producer named Gabe Pannell. A 2015 photo posted to the internet by Mr. Pannell’s father shows Mr. Lubbers and Mr. Pannell with Mr. Burton, who is known as “The Teacher” or “Our Beloved Teacher” within the Fellowship. A caption on the photo, which was also recently deleted, calls Mr. Pannell a “new student.”

Echoing claims made in the lawsuit, Erik Johansen, a senior video producer who has worked for the Google Developer Studio since 2015 through ASG, said the team’s leadership abused the hiring system that brought workers in as contractors.

Mr. Lloyd said that after applying for his job he had interviewed with Mr. Pannell twice, and that he had reported directly to Mr. Pannell when he joined a 25-person Bay Area video production team inside GDS in 2017. He soon noticed that nearly half this team, including Mr. Lubbers and Mr. Pannell, came from Oregon House.

Google paid to have a state-of-the-art sound system installed in the Oregon House home of one Fellowship member who worked for the team as a sound designer, according to the suit. Mr. Lubbers disputed this claim in a phone interview, saying the equipment was old and would have been thrown out if the team had not sent it to the home.

The sound designer’s daughter also worked for the team as a set designer. Additional Fellowship members and their relatives were hired to staff Google events, including a photographer, a masseuse, Mr. Lubber’s wife and his son, who worked as a DJ at company parties.

The company frequently served wine from Grant Marie, a winery in Oregon House run by a Fellowship member who previously managed the Fellowship’s winery, according to the suit and a person familiar with the matter, who declined to be identified for fear of reprisal.

He said ASG, not Google, hired contractors for the GDS team, adding that it was fine for him to “encourage people to apply for those roles.”And he said that in recent years, the team has grown to more than 250 people, including part-time employees.

Mr. Pannell said in a phone interview that the team brought in workers from “a circle of trusted friends and families with extremely qualified backgrounds,” including graduates of the University of California, Berkeley.

In 2017 and 2018, according to the suit, Mr. Pannell attended video shoots intoxicated and occasionally threw things at the presenter when he was unhappy with a performance. Mr. Pannell said that he did not remember the incidents and that they did not sound like something he would do. He also acknowledged that he’d had problems with alcohol and had sought help.

After seven months at Google, Mr. Pannell was made a full-time employee, according to the suit. He was later promoted to senior producer and then executive producer, according to his LinkedIn profile, which has also been deleted.

Mr. Lloyd brought much of this to the attention of a manager inside the team, he said. But he was repeatedly told not to pursue the matter because Mr. Lubbers was a powerful figure at Google and because Mr. Lloyd could lose his job, according to his lawsuit. He said he was fired in February 2021 and was not given a reason. Google, Mr. Lubbers and Mr. Pannell said he had been fired for performance issues.

A road to the winery on the compound in 1997.Credit…Jim Wilson/The New York Times

Ms. Jones, Mr. Lloyd’s lawyer, argued that Google’s relationship with ASG allowed members of the Fellowship to join the company without being properly vetted. “This is one of the methods the Fellowship used in the Kelly case,” she said. “They can get through the door without the normal scrutiny.”

Mr. Lloyd is seeking damages for wrongful termination, retaliation, failure to prevent discrimination and the intentional infliction of emotion distress. But he said he worries that, by doing so much business with its members, Google fed money into the Fellowship of Friends.

“Once you become aware of this, you become responsible,” Mr. Lloyd said. “You can’t look away.”

Tags
Google Sai̇d That Who Wine

Bear Markets and Recessions Happen More Often Than You Think

The C.E.O. Silence on the Jan. 6 Hearings

Over 360 newspapers have closed since just before the start of the pandemic.

Featured Posts
Brittney Griner’s Trial in Russia Is Starting, and Likely to End in a Conviction
2 hours ago

Brittney Griner’s Trial in Russia Is Starting, and Likely to End in a Conviction

Concerns, Complaints and a Suicide Shake Chelsea F.C.
5 hours ago

With a Throwback Style, He’s Charging Forward
5 hours ago