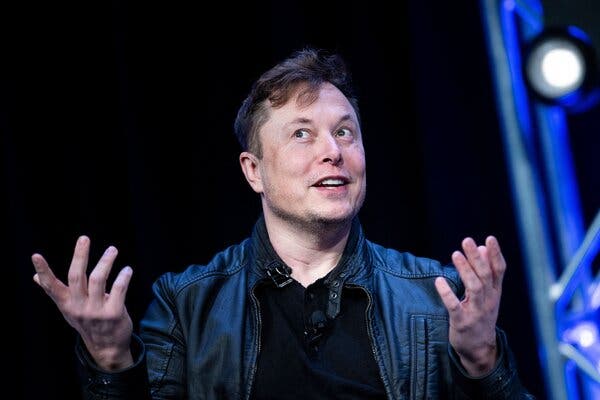 In the latest bomb in the Twitter takeover drama, Elon Musk tweeted this morning that his $44 billion bid was “temporarily on hold” until he could verify the company’s estimate that spam and fake accounts on its platform made up less than 5 percent of total users (that number is not new). About two hours later, Musk tweeted that he was still “committed” to the acquisition. Twitter shares had already fallen by 20 percent in premarket trading, while Tesla shares had jumped by 6 percent.

The tweets fed into swirling speculation that Musk may back out of the deal, as shares of Tesla, Musk’s main source of personal income, have tumbled. Musk had a covert meeting at Twitter’s San Francisco headquarters last Friday to discuss business and deal logistics, DealBook has confirmed, implying he was, at least then, focused on going through with it. (A spokesperson told DealBook that “as part of the transaction planning process, Elon Musk visited Twitter’s office for a meeting.”)

Can he even back out of the deal? He has already signed a contract. Beyond the $1 billion breakup fee, Twitter could take Musk to court to force him to pay for the deal if his debt financing is intact, per the deal contract. (This is what happened in 2001 when Tyson Foods tried to back out of an acquisition.)

Musk might be trying to push for a lower price by laying the grounds for a finding of material adverse change, similar to what LVMH did in its acquisition of Tiffany, citing financial damage caused by the pandemic. LVMH ultimately got a lower price for the deal.

But the “adverse change” threshold is high. And given the speed and limited diligence with which Musk pursued the Twitter deal, he is unlikely to find a sympathetic judge. Musk has already told investors he thinks Twitter can quintuple its revenue, which would make Twitter a steal at $44 billion.

“He’s already signed on the dotted line that says he bought a house,” said Brian Quinn, an associate professor at Boston College Law School focusing on corporate mergers. “If after you buy a house, you say, ‘I want to get a lower price,’ the seller will say no.”

The deal looks different than it did a week ago:

Did Musk’s tweet violate disclosure laws? It moved shares of Tesla and Twitter, indicating it should have been something all shareholders found out about in a securities filing. Should that be added to the long list of regulatory issues Musk has run into with this bid?

The Fed chair says lowering inflation will “take some pain.” Jerome Powell said in an interview with Marketplace that while bringing down inflation was likely to hurt, allowing price gains to persist would be the bigger problem.The Senate yesterday confirmed Powell to a second four-year term.

The Norwegian oil fund denounces “corporate greed” in executive pay. Nicolai Tangen, C.E.O. of the $1.2 trillion fund, the world’s largest sovereign wealth fund, told The Financial Times that the fund would target large salary packages not justified by performance. The fund has challenged executive pay at Intel, Apple and elsewhere.

The White House pledges to address the baby formula shortage. Senior officials announced efforts to speed manufacturing and increase imports to alleviate a nationwide shortage of infant formula. The Biden administration has also instructed the F.T.C. to crack down on price gouging by baby formula manufacturers.

The U.K. is sanctioning Vladimir Putin’s reputed girlfriend, Alina Kabaeva. The British foreign secretary, Liz Truss, said today that the sanctions would also apply to Putin’s ex-wife and his cousins. “We are exposing and targeting the shady network propping up Putin’s luxury lifestyle and tightening the vice on his inner circle,” Truss said.

Siemens leaves Russia after 170 years. The German electronics giant Siemens joined the long list of companies that have left Russia since its invasion of Ukraine in February. Siemens said that in its second quarter it took a hit of 600 million euros, or about $625 million, from Russian sanctions.

What if the stock market and cryptocurrencies crashed simultaneously — and caused broader economic distress? That prospect has haunted some officials who worked in Washington during the last financial crisis and are now driving policy for the Biden administration. The S.E.C. chair Gary Gensler, for one, has warned that without increased oversight, crypto’s rapid rise and inroads into mainstream finance could lead to an economic meltdown, much like the 2008 subprime mortgage debacle.

Now, amid a price plunge in the new assets that werespawned in part by that crisis, many are echoing Gensler’s sentiment. Critics say the crypto collapse is long overdue, while some traders are comparing the alarm and fear today to the start of the 2008 crisis, write The Times’s David Yaffe-Bellany and Erin Griffith and DealBook’s Ephrat Livni.

The ties between old and new markets are expanding every day. An S.E.C. filing yesterday revealed that the billionaire founder of the crypto exchange FTX, Sam Bankman-Fried, had bought a 7.6 percent stake in the publicly traded online stock and crypto trading app Robinhood, paying about $648 million. The company’s shares soared in after-hours trading. FTX is not publicly traded — yet — but the move shows Bankman-Fried’s old-school ambitions.

The Twittersphere and crypto cultists enthusiastically likened the purchase to Elon Musk’s Twitter takeover advances, and more proof of the financial and cultural might of billionaires for blockchain. But the situations are distinct. Bankman-Fried, 30, is perhaps as intent on exerting influence as Musk, 50. He is also vocal, pouring millions into political donations and global lobbying efforts, and he is widely investing in crypto ventures to help assure the ascendance of digital assets. Twitter and Robinhood, however, are different beasts: There is no path to a takeover of Robinhood without the support of its two founders, Vladimir Tenev and Baiju Bhatt, who are deeply engaged in the business and reportedly hold more than 60 percent of the voting rights. They also just took the company public last year.

Crypto’s most mainstream exchange, Coinbase, is prepping for more storms. When the companywent public just over a year ago, its stock opened at $381. Now it is under $60 amid the widespread crypto downturn. Coinbase reported quarterly results this week that fell far short of analyst estimates. It also appears to be bracing for stricter scrutiny from the S.E.C., filing a registration statement “intended to be used for potential prospective offerings which may include the sale of new securities.”

Securing financing. Though his original offer had scant details and was received skeptically by Wall Street, Mr. Musk has been moving swiftly to secure commitments worth $46.5 billion to finance his bid, putting pressure on Twitter’s board to take his advances seriously.

Will the deal go through? For the purchase to be completed, shareholders have to vote and regulators have to review the offer first. Scrutiny is likely to be intense and questions remain about Mr. Musk’s plans for the company, especially after he suggested the deal might be “temporarily on hold” as he gathered information about the volume of spam and fake accounts on Twitter. (He later said he was “still committed” to the acquisition.)

In other words, the company seems to believe the agency may soon make good on Gensler’s threats. He has often said most crypto tokens are securities requiring registration. That would mean more company obligations and more agency oversight. At this moment, that perhaps does not seem so unwise.

Commerce in Russia has been reduced since Russia’s invasion of Ukraine, but it has yet to be crippled, writes The Times’s Ana Swanson. Shipping traffic in and out of Russia has remained relatively strong, according to data from the shipping tracker Refinitiv, as companies have raced to fulfill contracts for purchases of energy and other goods before the full force of global sanctions goes into effect.

Changes to behavior after the Russian invasion were not yet reflected in shipping traffic, said Jim Mitchell, the head of oil research for the Americas at Refinitiv, since crude oil typically trades 45 to 60 days ahead of delivery.

“The volume has been slow to decline, because these were contracts that have already been set,” Mitchell said. Defaulting on such contracts is “a nightmare for both sides,” he said. “Which means that even in the current environment, nobody really wants to breach a contract.”

Volumes of crude and oil products shipped out of Russian ports climbed to 25 million metric tons in April, data from Refinitiv shows, up from around 24 million metric tons in each of the four previous months, and mostly above the levels of the past two years. Russia’s outgoing shipments last month were buoyed by the global economic recovery from the pandemic, Mitchell said.

Russia stopped publishing data on its imports and exports after Western governments united to announce their array of sanctions and other restrictions. Exports of oil or gas that leave Russia through pipelines can also be difficult for outside firms to verify.

But the global movements of the massive vessels that call on Russian ports are easier to monitor. Ships are required to transmit their identity, position, course and other information through automatic tracking systems, which are monitored by a variety of firms like Refinitiv, MarineTraffic and Kpler.

Think Twice Before Taking Out a Private Student Loan

Why Salmon and Rice Go So Well Together
55 mins ago

Congress Is Paralyzed on Guns. Here’s Why Chris Murphy Is Still Hopeful.
1 hour ago