The Omicron wave of the coronavirus appears to be cresting in much of the country. But its economic disruptions have made a post-pandemic normal ever more elusive.

Forecasters have slashed their estimates for economic growth in the first three months of 2022. Some expect January to show the first monthly decline in employment in more than a year. And retail sales and manufacturing production fell in December, suggesting that the impact began well before cases hit their peak.

“Those are Omicron’s fingerprints,” said Constance L. Hunter, chief economist for the accounting firm KPMG. “It will slow growth in the beginning of the first quarter.”

On Monday, global markets fell sharply, continuing a spate of recent declines; the S&P 500 was down more than 10 percent from its early-year high, the standard definition of a correction. Market analysts said the declines reflected fears that the Federal Reserve might need to respond more aggressively than expected to rapidly rising prices — a prospect that some economists say has been made more likely by Omicron.

Recovery prospects in the longer run are uncertain. Some economists say even temporary job losses could force consumers to pull back their spending, especially now that federal programs that helped families early in the pandemic have largely ended. Others worry that Omicron could compound supply-chain backlogs both in the United States and overseas, prolonging the recent bout of high inflation and putting pressure on the Fed to act.

But some see Omicron as the equivalent of a severe winter storm, causing disruptions and delays but ultimately doing little permanent economic damage. The recovery has proved resilient so far, they argue, and has enough underlying momentum to carry it through.

“There are so many potential ways that this could go,” said Tara Sinclair, an economist at George Washington University. “We didn’t even agree on where we were going without Omicron, and then you throw Omicron on top.” 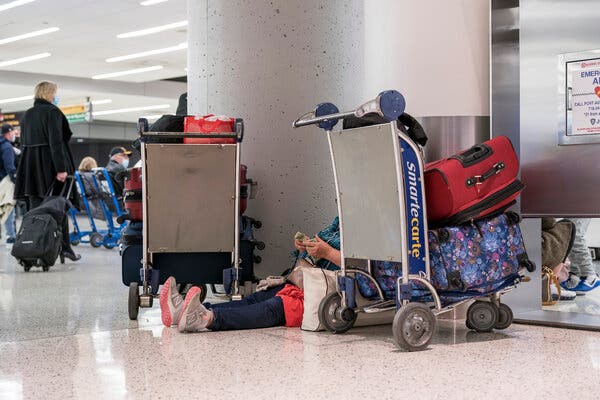 Travelers at Kennedy International Airport last month. Airlines canceled thousands of flights over the holidays because so many crew members were out sick.Credit…Karsten Moran for The New York Times

More than 8.7 million Americans weren’t working in late December and early January because they had Covid-19 or were caring for someone who did, according to the latest estimate from the Census Bureau’s experimental Household Pulse Survey. Another 5.3 million were taking care of children who were home from school or day care. The cumulative impact is larger than at any other point in the pandemic.

Covid-related absences are creating headaches for businesses that were struggling to hire workers even before Omicron. Restaurants and retail stores have cut back hours. Broadway shows called off performances. Airlines canceled thousands of flights over the holidays because so many crew members called in sick; on one day last month, nearly a third of United Airlines workers at Newark Liberty International Airport, a major hub, called in sick.

The Status of U.S. Jobs

At Designer Paws Salon, a pet grooming company with two locations in the Columbus, Ohio, area, business has been strong in recent months, thanks in part to a pandemic boom in pet ownership. But Misty Gieczys, the company’s founder and chief executive, has been struggling to fill 11 positions despite generous benefits and pay that can reach $95,000 a year in commissions and tips.

Omicron has only made things worse, she said. Since Christmas, she has received only three job applications, and just one applicant got back to her after she reached out. Then Ms. Gieczys, who has two young daughters, got Covid-19 herself for the second time, forcing her to stay home. That, on top of day care shutdowns because of the virus, has meant she has spent a significant amount of time away from work.

“If I wasn’t the owner, I think I would be fired, honestly,” she said.

But while the Omicron wave has contributed to businesses’ staffing woes, there is little sign so far that it has set back the job market recovery more generally. New filings for unemployment insurance have risen only modestly in recent weeks, suggesting that employers are holding on to their workers. Job postings on the career site Indeed have edged down only slightly from record highs.

“It’s a vast difference from 2020, where there were mass layoffs,” said Jason Furman, a Harvard economist who was an adviser to President Barack Obama. “Now employers are holding onto people because they expect to be in business in a month.”

The new variant could make inflation worse (or maybe better).

When the pandemic began in early 2020, it was a shock to both supply and demand, as companies and their customers pulled back in the face of the virus.

With each successive wave, however, the impact on demand has gotten smaller. Businesses and consumers learned to adapt. Federal aid helped prop up people’s income. And more recently, the availability of vaccines and improved treatment options have made many people comfortable resuming more normal activities.

Supply problems have been slower to dissipate, and in some cases have gotten worse as production and shipping backlogs have grown. If Omicron follows the same pattern, limiting the supply of goods and workers while doing little to dent consumers’ willingness to spend, it could lead to faster inflation.

“What should happen is the supply shock should be much larger than the demand shock,” said Aditya Bhave, senior economist at Bank of America. “All of that just means more inflation.”

But Omicron’s impact on inflation is not straightforward. Retail sales fell 1.9 percent in December, and restaurant reservations on OpenTable have fallen in January. That suggests that the record-breaking number of coronavirus cases is having an effect on demand, even if it is more muted than in past waves.

The latest Covid surge is also the first to hit after the expiration of enhanced unemployment benefits, the expanded child tax credit and most other emergency federal aid programs. Nearly a quarter of private-sector workers get no paid sick time, meaning that even a temporary absence from work could force them to cut back spending now that government benefits aren’t replacing lost income.

“That stimulus pay really helped push people past their reticence and say, ‘It’s OK to spend,’” said Nela Richardson, chief economist for ADP, the payroll company. “Now there’s no big push in stimulus, and so people might change their spending behavior.”

One possibility is that Omicron could reduce inflation in the short term, as consumers pull back spending, but increase it in the longer run, as the virus leads to shutdowns in Asia that could prolong supply-chain disruptions.

Increased uncertainty could cause longer-run damage.

Testing facilities were inundated as the Omicron variant took off last month. Covid-related absences are creating headaches for businesses.Credit…Kim Raff for The New York Times

Cozy Earth, a bamboo bedding and clothing company based in Salt Lake City, was poised to start 2022 on a strong note. Then Omicron “just hit the brakes on us,” said Tyler Howells, the company’s founder and president.

Over a three-week period, roughly two-thirds of the company’s 50 employees contracted the virus. A group of web developers flew in for a meeting, but one tested positive, so the meeting had to be canceled. A contractor that was producing signs for an upcoming trade show put the order on hold for a few weeks because too many employees were sick. With so many people out sick in early January, Mr. Howells shut down the office for more than a week.

Still, the direct damage to Cozy Earth’s business has been manageable, Mr. Howells said. He is more concerned about the subtler toll that each new false dawn takes on his business, and his ability to plan for the future.

“If it continues, it will be a problem,” he said. “It will create damage to the business in terms of fits and starts.”

Ms. Sinclair, the George Washington University economist, said the most lasting consequence of the Omicron wave might be the way it has again upended the plans of both businesses and workers. Every time that happens, she said, it increases the risk of permanent damage: Project delays turn into cancellations; expansion plans are abandoned; people who had been thinking about returning to work decide to retire instead.

Why Salmon and Rice Go So Well Together
1 hour ago

Congress Is Paralyzed on Guns. Here’s Why Chris Murphy Is Still Hopeful.
1 hour ago