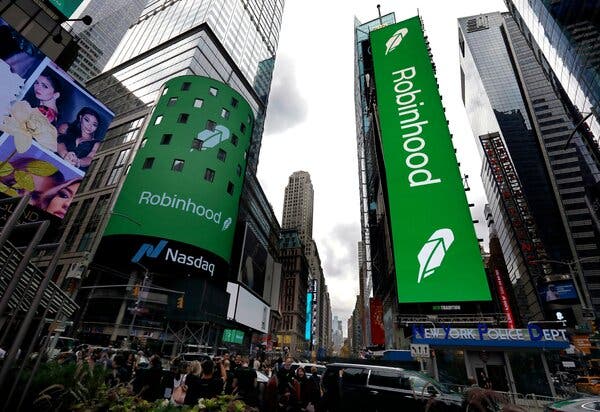 Twelve months ago, thousands of retail investors banded together to bid up the stocks of a handful of ailing companies, notably the video game retailer GameStop and the movie theater chain AMC. The actions sent those shares soaring, booking huge gains on paper and dealing heavy losses to hedge funds and to other professional investors who were betting against the companies.

On this day last year, GameStop hit its record high, closing up nearly 1,800 percent from just a few weeks before. The so-called meme stock phenomenon had been born, and some said it would mark a permanent power shift on Wall Street.

Robinhood played a major role in the meme stock phenomenon, and it’s still dealing with the fallout. The commission-free trading app has brought millions of new investors into the markets, many attracted by the heady gains made by traders during last January’s frenzy. But the day after GameStop reached its peak, Robinhood abruptly restricted trading in some meme stocks, claiming that it had been forced to do so by a liquidity crunch, Wall Street rules and clearinghouse limits. The restrictions caused the stocks to plunge, prompting lawsuits, congressional hearings and an S.E.C. investigation.

“A new generation turned the act of investing into a mass movement,” Robinhood said in a statement on Tuesday about last year’s market events. “We never want our customers to be surprised with trading restrictions again,” it added, noting that it had bolstered risk and compliance infrastructure, among other things. Yesterday, the S.E.C. chairman, Gary Gensler, put out a brief statement saying that the agency was still working on recommendations to make the market “as fair, orderly, and efficient as possible.”

Robinhood happens to report its latest quarterly results today, and analysts expect it to say that the company lost more than $300 million in the fourth quarter, down from a small profit a year earlier. The stock has lost about two-thirds of its value since a summer I.P.O., stoking rumors that it could become a takeover target. Lingering issues from the meme stock rally — and related trading restrictions — are likely to come up on the call:

Justice Stephen Breyer’s retirement takes center stage in Washington. The impending departure of the Supreme Court’s most senior liberal jurist is unlikely to affect the institution’s ideological balance, given its 6-3 conservative majority. But President Biden will have a chance to put his stamp on the court. Likely picks include Judge Ketanji Brown Jackson of the U.S. Court of Appeals for the D.C. circuit and Justice Leondra Kruger of California’s Supreme Court.

Meta reportedly winds down its crypto project. Diem, the initiative backed by Facebook’s parent company, will sell its assets to a business partner, the small California bank Silvergate Capital, for $200 million, The Wall Street Journal reports. Diem had sought to create a crypto payments network, but faced opposition from regulators.

Tesla’s supply-chain warning overshadows a strong earnings report. The electric-car maker said that its profit last year had climbed sixfold, to $5.5 billion. But the company cautioned that pandemic-driven shortages in components would limit production this year, a problem that prompted it to postpone releasing new models.

The Gates Foundation revamps its oversight. The philanthropy organization run by Bill Gates and Melinda French Gates named a new governing board, with the appointees including the head of the London School of Economics, the head of the nonprofit consultancy Bridgespan and a telecom billionaire. The move was made to shore up the foundation’s governance after the Gates divorce.

Bill Ackman makes a $1 billion bet on Netflix. The billionaire hedge fund manager said yesterday that he had bought 3.1 million shares in the streaming giant. Ackman is betting that Netflix’s stock is undervalued, after its shares plunged following a warning last week about slowing growth prospects.

How much room does the Fed have to raise rates?

The Fed yesterday signaled that it was ready to raise interest rates “soon” to address high inflation. Jay Powell, the Fed chair, said that he and his colleagues were “of a mind” to start increasing rates at their next meeting, in March.

The stock market seesawed for yet another day, rising strongly ahead of the Fed announcement but dropping quickly after Powell spoke. Powell’s vagueness on how high and how often the Fed would raise rates didn’t help. “I don’t think it’s possible to say exactly how this is going to go,” he said.

The Fed may have less room to raise rates than in the past, judging by the bond market. When the central bank began raising rates in late 2015, for instance, the 10-year Treasury yield was 1.3 percentage points higher than the two-year yield. In mid-2004, at the start of an earlier tightening cycle, it was 2 percentage points. The current spread is just 0.7 percentage points.

Beware the inverted yield curve: When short rates, which are more sensitive to Fed actions, rise above long rates, which more closely follow expectations for future economic growth, it is usually a sign of impending recession. If by trying to tame inflation, the Fed raises rates so aggressively that it risks bringing economic growth to a halt, that would be reflected in a flatter (or inverted) yield curve. After yesterday’s Fed meeting, investors nudged up their expectations for rate increases, and now expect the Fed to raise rates five times this year, pushing its policy rate up by some 1.25 percentage points.

The Fed is likely to mind this gap. The signal that an inverted yield curve sends is something that the central bank probably wants to avoid. The Fed could sell off some of its bonds to try to push up long-term rates, but that could cause other problems, and Powell said yesterday that the Fed didn’t have a plan for that yet. But will fewer interest-rate increases be enough to beat back inflation? The wild swings in stocks and signals from other markets suggest that the question is up for debate.

“I should have done more homework on it.”

— The billionaire entrepreneur Mark Cuban on losing almost $200,000 trading a somewhat obscure crypto token. His takeaway was that it is wrong to invest in cryptocurrencies that have no underlying reason for existing, a tricky proposition in a market where traditional notions of value don’t apply.

The meaning of Neil Young’s exit from Spotify

Spotify began removing Neil Young’s music from its platform yesterday, after the star called on the streaming service to choose between him and Joe Rogan, whom Young accused of spreading coronavirus misinformation on his podcast, which is hosted by Spotify. (“Lies being sold for money,” Young wrote in a statement.) How much of a threat is this for Spotify?

Young is the latest to challenge Spotify on misinformation. Audio platforms like Spotify have been criticized for being slower than social media companies in taking down sources of false information about Covid. (Yesterday, YouTube banned the right-wing media figure Dan Bongino for attempting to evade a suspension over Covid misinformation.) Hundreds of public health experts published an open letter last week urging Spotify to move more quickly, specifically citing Rogan’s podcast.

So far, Spotify is standing behind Rogan. The service said that it was “balancing both safety for listeners and freedom for creators” and that it had removed “over 20,000 podcast episodes related to Covid.” It added that it hoped to reinstate Young’s music, which the musician has taken off the platform before (citing sound-quality issues).

Running the numbers: Before yesterday, Young had more than six million monthly listeners on Spotify, and the service has 318 million monthly listeners overall. Spotify has gambled heavily on the podcast business, betting in part on advertising revenue, which now makes up about 13 percent of its revenue. It has spent $800 million on podcast-related companies, and reportedly paid $100 million for the exclusive rights to Rogan’s show.

Will others follow Young’s example? A number of musicians have supported coronavirus vaccines, including Olivia Rodrigo and Paul McCartney. But for most artists, the decision on whether to withdraw from a streaming service lies with their labels, though record companies may take their wishes into account. And musicians previously have criticized Spotify’s effort to create a policy they saw as regulating artists’ behavior.

It’s Hard to Tell When the Crypto Bubble Will Burst, or If There Is One

Congress Is Paralyzed on Guns. Here’s Why Chris Murphy Is Still Hopeful.
28 mins ago

The Stats Are Hiding a Secret About the Miami Heat’s P.J. Tucker
1 hour ago

The Stats Are Hiding a Secret About the Miami Heat’s P.J. Tucker