J. Shia first drove a motorcycle when she was about 8. Because she was small, her dad — a jack-of-all-trades with a penchant for bikes — would kick-start it for her and lean it up against a tree so she could climb up and ride. This worked well until it was time to stop the bike and get off.

“To get off, I’d have to line the bike up with a tree, and I’d miss all the time and smash my head, or fall off,” Ms. Shia said. So she would keep going. Her two older brothers, waiting their turns, would become impatient. But though she loved riding, she wasn’t being greedy. “I was too scared to stop at the tree,” she said.

Ms. Shia, now 31, still has the old Honda, and can still hardly touch the ground while on it. But she no longer has to stop riding. She is the proprietor of Madhouse Motors, a 6,000-square-foot motorcycle shop in the Roxbury neighborhood of Boston. 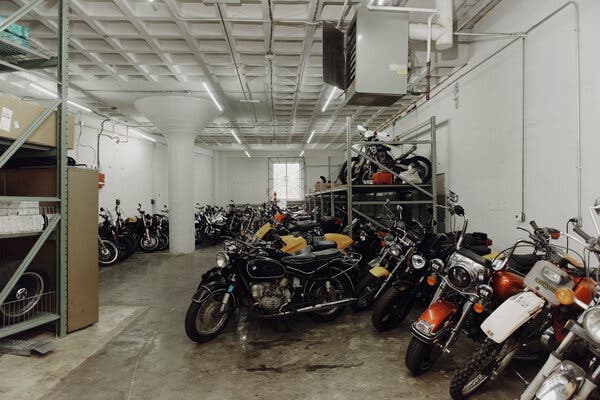 Storage at Madhouse Motors. Ms. Shia’s father told her when she was a teenager that she could have one of the dozens of old motocycles he had acquired if she repaired it.Credit…Tony Luong for The New York Times

“There are a lot of people in the motorcycle world who are sort of poseurs for the culture,” said Lucas Merchant, 30, the owner of a Boston real estate management company and a client of Ms. Shia’s for the past 10 years. “J. is absolutely the authentic, real deal.

“She knows everything about motorcycles. She’s basically built the largest vintage motorcycle restoration company in New England, and it’s completely bootstrapped,” he said. “But she literally started in a backyard.”

When Ms. Shia was a teenager in Cambridge, Mass., her father bought a passel of old motorcycles, planning to repair and sell them. “My family’s yard wound up getting filled up,” she said. “At one point there was, like, 70 old motorcycles in the yard. So I asked if I could have one, and he basically said: ‘Sure. If you can fix one, you can have it.’”

Through trial and error, Ms. Shia got the bike running, and she would ride it around “to kind of show off,” she said. When people asked how she had acquired it, she would say: “I fixed it up myself. I’m a mechanic.”

People began tapping her to repair their motorcycles, and what she lacked in skill she made up in pluck. “I’d give people my parents’ address and say, ‘Oh, yeah, come to the yard and give me 20 bucks and I’ll fix your bike.’”

She had developed an interest in photography, and after high school was accepted to the Massachusetts College of Art and Design (MassArt), one of the oldest American art schools and the only independent one that is publicly funded. But the summer before her first year, a former girlfriend became pregnant and wouldn’t be able to care for the child, so Ms. Shia volunteered to take responsibility for the baby, a boy named Audai.

“I wanted to be a documentary war photographer, and you can’t do that with a baby,” she said. “And so I was kind of confused at what I was going to do with my career.”

She continued repairing bikes throughout college, doggedly honing her abilities and, when stumped, cold-calling skilled mechanics. She attended classes full time, arranging with professors to arrive late or leave early to care for Audai, and relying on family for backup child care.

“One time, she had to bring Audai to school, and so she paid one of the girls in the photo lab to watch him for a little bit in the hallway,” said Gretchen Devine, 31, Ms. Shia’s partner of 11 years and a classmate from MassArt.

“I came out of the darkroom and saw Audai, who was like 4 months old, playing in a cardboard box, and he was the cutest little kid you could ever imagine,” Ms. Devine said. “So I sat down and started playing with him, and J. came out in the hallway. She’ll identify that moment as when she decided to try to get together. That was kind of it. But I met the kid first, technically.”

Madhouse Motors, which opened in 2009, provides a sense of community for bikers who have felt excluded elsewhere.Credit…Tony Luong for The New York Times

Ms. Devine was immediately drawn in by Ms. Shia’s creative ambition and talent. “I’ve never met anyone so self-motivated. Though I guess it’s not just self-motivated. It’s motivated for Audai,” she said. “She wants to see him have every opportunity that she possibly can.”

This tenacity has served Ms. Shia well, but it hasn’t always brought her joy. “My schedule was all types of crazy, so there was many years where working on motorcycles was kind of an act of desperation, and both myself and my family didn’t have such a positive connotation with this,” she said. “I was working in two layers of Carhartts, in the dirt, outside, for most of my teens and 20s.”

Opening her first indoor shop in 2009 was a boon for Ms. Shia, because she was able to create a space of her own. This provided a sense of comfort and safety for herself and her patrons, many of whom — because of their gender, identity or sexuality — felt excluded from the larger biker population.

“Because I’m so welcomed with J. at Madhouse, I find no need to go elsewhere,” one longtime customer said.Credit…Tony Luong for The New York Times

“I’ve definitely run into some motorcycle people who weren’t as open to the trans community, and it was very off-putting,” said Krys LeMay, 32, an audio engineer who bought his first bike from Ms. Shia in 2014 and remains a loyal customer. “But that just makes the connection that I do have that much more special. Because I’m so welcomed with J. at Madhouse, I find no need to go elsewhere.”

Ms. Shia hopes to expand that sense of community by building out a coffee shop at Madhouse and opening it this summer. She and Ms. Devine also host an annual motorcycle show in Cambridge called Wild Rabbit. This year’s event, on Saturday, is expected to draw 2,000 people.

But one of the most potent ways Ms. Shia has found to transcend the workaday has been designing bespoke motorcycles — for herself. It started in 2017 when she was invited to show a bike at an event called Motorcycles as Art. Though this seemed the perfect opportunity to meld her art school aspirations with her current vocation, she resisted going, doubting her abilities.

Some pages from Ms. Shia’s sketchbooks. An early interest in photography led her to attend the Massachusetts College of Art and Design.Credit…Tony Luong for The New York Times

“Then a light bulb went off, and I was like: ‘Wait. I’ve never built a bike for me, in a style that I like. I can do whatever I want,’” she said. “And it was this aha moment, where I finally, for the first time, after a life of being around motorcycles, designed a bike that was not for a customer.”

She created a 1971 BSA A65 that started with the crank of a huge lever, in collaboration with a sculptor friend, Michael Ulman. The bike was well received, and in the aftermath, she began concentrating more on creative projects. This resulted in a complex, yearslong build, inspired by “Swan Lake.”

“I wanted to do a project that was two bikes, and have them mirror each other,” Ms. Shia said. “The same exact weight, length, height, same year, make, model. But polar opposites.” Like the Black Swan and the White Swan in the Tchaikovsky ballet.

Ms. Shia working in her studio. A pair of motorcycles she transformed were displayed at a show during Miami Art Week in December.Credit…Tony Luong for The New York Times

She sourced vintage parts, as she always had, from eBay — microscopes, pencil sharpeners, rotary phones, juicers, musical instruments — and grafted them on, with every piece serving a function. The bikes were displayed in December at the Scope Art Show during Miami Art Week. One sold to a collector for around $100,000. Since October, Ms. Shia has collaborated with eBay Motors, and was featured in a recent campaign called “Let’s Ride.”

Despite all her online acquisitions, Ms. Shia has recently scaled down her personal motorcycle collection from “60 or 70” to “20, 25, maybe 30?” She laughed. “I’m trying to break free of the potential apple falling too close to the tree — of the hoarding idea, like my dad.”

Continuing to break familial cycles, her son, now 12, “doesn’t really seem that interested in being a mechanic, and that is the greatest thing for me,” Ms. Shia said. Though he’s comfortable on dirt bikes and all-terrain vehicles, she said, he has expressed an interest in becoming a teacher or a veterinarian.

For her own future, Ms. Shia wants to keep expanding her operation, serving her communities and broadening her output.

“She’s always wanted a bike in the Guggenheim, one of her motorcycle sculptures. And I think she’ll make it happen,” Ms. Devine said. “Anything she puts her mind to, she actually does it.”

Tags
Old She That This Ti̇me

In the Shadow of a Cornish Castle, a Vegetarian Feast for Beltane