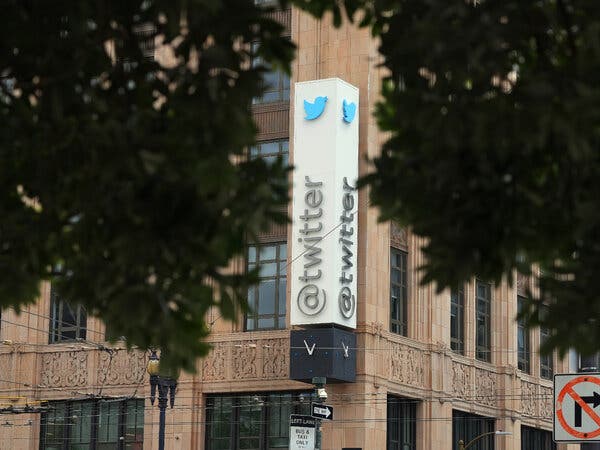 What seemed highly improbable a week and a half ago is now looking a lot more real: Twitter is in advanced talks to sell itself to Elon Musk. The company’s 11-member board was negotiating with Musk into the early hours of the morning over his offer to buy the social networking service and take it private, DealBook’s Lauren Hirsch and The Times’s Mike Isaac report.

The two sides have been discussing details, including a timeline to close any potential deal and any fees that would be paid if an agreement were signed and then fell apart, according to two people with knowledge of the situation. The negotiations followed a board meeting yesterday morning to discuss the offer. No deal is certain, and it remains entirely possible that the talks will break down. It is rare for a board to try to hammer through a deal as quickly as this.

Through it all, Musk kept tweeting. Musk took aim at Bill Gates over the weekend, saying Gates had taken a short position in Tesla’s stock, betting that it would fall. Musk was responding to a tweet that included texts he apparently exchanged with Gates about potential philanthropic projects. Minutes later, he mocked Gates’s physical appearance in a tweet that got 1.1 million “likes.” Yesterday, before his meeting with Twitter’s board, Musk tweeted that he was “moving on” from “making fun of Gates for shorting Tesla while claiming to support climate change action.”

The tweets may be a glimpse at how Twitter would run under Musk’s ownership. Critics say they were just the latest example of Musk using the platform, and his enormous following on it, as a bully pulpit, whether directed at billionaires or others. Musk has said he wants Twitter to fulfill its “societal imperative” as a platform for free speech. But as DealBook has reported, that raises real questions of what might happen to Twitter under his watch, given the tone he is setting and the problems that plagued the network’s previous C.E.O., Jack Dorsey, before he embraced a more rules-based approach to content moderation. Dorsey had said that he “didn’t fully predict or understand the real-world negative consequences” of a more unfettered service. To what extent will Twitter’s board weigh the potential for more “real-world negative consequences” against the money put forward by Musk?

Emmanuel Macron comfortably holds off France’s far right. Marine Le Pen yesterday conceded to Macron, the first French president to be re-elected in 20 years, after he won 58.5 percent of the vote to Le Pen’s 41.5 percent. The result was a relief for officials in the U.S. and Europe, who were wary of Le Pen’s hostile views toward NATO and the E.U.

Chinese authorities order mass Covid testing in Beijing. As the coronavirus spreads in an affluent district of the capital, residents are waiting in long lines for tests and rushing to supermarkets to stock up on food in case the city goes into another lockdown.

Tech giants including Apple, Amazon and Microsoft report earnings this week. The quarterly updates will come after stocks tumbled last week for a third week; Friday was the S&P 500’s worst day since early March. Recent comments from Fed officials have signaled that interest rates will climb far faster than previously expected because of persistently high inflation.

The National Labor Relations Board sues Starbucks for retaliating against union organizers. U.S. labor officials petitioned a federal court to make Starbucks reinstate three workers who they say were forced out for union campaigning. Meanwhile, workers organizing in the tech industry are finding that their companies’ responses are often from the standard anti-union playbook.

Elon Musk’s Twitter plans could be bad news for Donald Trump’s social network. Trump had positioned his app Truth Social as Twitter’s freewheeling conservative counterpart, but if Musk takes over Twitter and loosens its moderation policies, Truth Social’s very reason for being would be under threat.

Florida’s rushed passage last week of a bill revoking Walt Disney World’s special tax status, just days after Gov. Ron DeSantis called for such a move, may look to some like a swift governmental victory. But it could end up being a political liability if it ends up burdening local taxpayers or fails a legal challenge.

The conflict was sparked when Disney objected to a Florida law prohibiting discussion of gender identity and sexual orientation in public-school classrooms. Disney has not yet commented on the state’s extraordinary response. But if the company sues, the legislature’s actions could be found unconstitutional, precisely because DeSantis has been so vocal in his opposition to Disney.

Corporations are people too. For more than 50 years, Disney has run the Reedy Creek Improvement District independently and received special benefits. The repeal would end Disney’s special status in 2023, but many lawyers and free speech advocates say Florida could lose a constitutional challenge — if Disney can prove this was retribution for political speech. As “artificial persons,” companies have long had constitutional rights. At the bill signing on Friday, DeSantis referenced Disney’s position on the education law, calling it a “provocation” and vowing to “fight back.” While Disney isn’t entitled to its special district, retracting the benefit in order to punish the company for political protest appears to violate the First Amendment.

But proving retribution may not be easy. Despite DeSantis’s evident feud with Disney, the company could have trouble showing that other lawmakers were motivated by the intent to punish political speech and would not have approved the bill but for Disney’s protest. Also, because the benefits in question are unique to Disney, this particular case may get complicated and enter uncharted constitutional territory.

Democrats and Republicans are switching sides. The ideological left and right are now taking new angles in an old fight. In 2010, when the Supreme Court decided Citizens United, a case that removed limits on corporate political spending, Democrats protested that companies would have undue political influence, while Republicans cheered corporate freedoms. Now, many conservatives are angered by companies speaking up on political issues, while progressives have become the unlikely defenders of business.

“I am sorry. I got this one wrong. I made a mistake. I apologize.”

— Gabe Plotkin, a hedge fund manager who lost big on GameStop and other meme stocks, in a letter to shareholders yesterday. Plotkin said he was ditching a plan announced last week to close and then immediately reopen his fund, effectively erasing its losses. The plan would have allowed Plotkin’s Melvin Capital to begin charging performance fees again, rather than waiting until it recovered its losses, as is standard practice.

The offer. Elon Musk, the world’s wealthiest man, made an unsolicited bid worth more than $43 billion for the social media company. Mr. Musk said that he wanted to make Twitter a private company and that he wanted people to be able to speak more freely on the service.

Twitter’s response. The social media company countered the offer with a defense mechanism known as a “poison pill.” This well-worn corporate tactic makes a company less palatable to a potential acquirer by making it more expensive for them to buy shares above a certain threshold.

What’s next? On April 21, Mr. Musk said he had received commitments worth $46.5 billion to finance his bid. He added that he was considering pursuing a hostile takeover with a move, known as a tender offer, that would see him take his offer directly to Twitter shareholders.

Warren Buffett and climate activists are likely to square off again.Credit…Rick Wilking/Reuters

Warren Buffett’s Berkshire Hathaway will hold its annual meeting next weekend. It will be the first time since the start of the pandemic that the billionaire investor has gathered his shareholders and legion of fans in person at what is often called “Woodstock for Capitalists.” At the meeting, Buffett will, once again, face a shareholder proposal calling on Berkshire to overhaul how it views climate risks and do more to cut emissions, reports The Times’s Peter Eavis.

The proposal is unlikely to pass. Though Buffett has backed other progressive causes, he has long opposed efforts to get Berkshire to disclose more about its carbon footprint or climate risks. Buffett holds special shares that give him the power to veto proposals he doesn’t like. Still, a vote on a similar proposal last year was close, and a number of Buffett allies, including Bill Gates, are also facing increased pressure to take stronger stands on climate change.

Buffett argues that his company already discloses plenty of climate information. Berkshire Hathaway Energy, one of the nation’s largest producers of wind energy, does report emissions data. But Berkshire does not reveal its overall climate impact. Buffett has refused to put a number on Berkshire’s financial exposure to climate change, which is likely to be enormous given that it is one of the largest property and casualty insurers in the world.

Berkshire’s energy subsidiary has weaker emission targets than some of its peers. Berkshire Hathaway Energy uses looser language than many other utilities, saying it is “striving to achieve net zero” but how fast it gets there will depend on customers, regulators and technology. Rivals like Xcel Energy and Duke Energy have said they are committed to reaching net-zero carbon emissions by 2050, with no caveats.

Berkshire may soon have to disclose more climate information anyway. The S.E.C. has proposed a rule that would require public companies to report the climate-related impact of their businesses.

After a Rocky First Year, a Cautious Garland Finds His Footing

For Virginie Viard, Inspiration Comes During Walks by the Seine