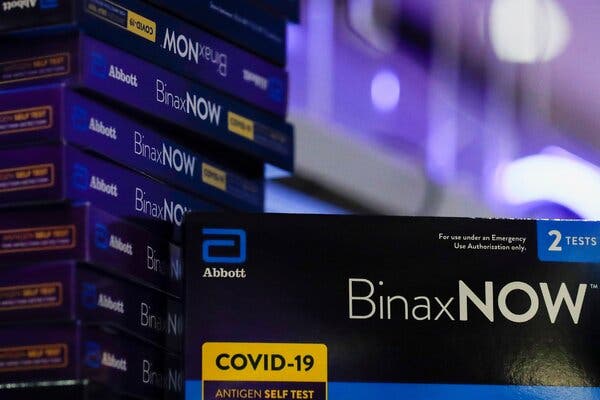 If you work for the right company, getting a coronavirus test isn’t difficult.Credit…Caroline Brehman/EPA, via Shutterstock

As the Omicron variant of the coronavirus surges across the country, tests are in short supply. But for a select group of employees at corporate America’s largest firms, tests are free and often readily available. These companies have been buying tests in bulk, some as part of their return-to-office protocols and others as a perk to offer workers peace of mind — even for those not yet coming into the office.

Unlike other company perks, like free snacks, virus tests are a vital public health tool. Some large corporations are sending out free weekly shipments to employees, while other businesses, like small restaurants, are struggling to safely stay open. Tests, like personal protective equipment and vaccines, have become the latest example of how a means to manage the coronavirus crisis can aggravate social and economic inequality.

The federal government has been slow to authorize rapid antigen tests, because it has held them to a high standard. (Other places, like Britain, were quicker to approve rapid tests as a public health tool, leading to faster production.) And unlike Washington’s approach to vaccines, the development of rapid tests has mostly been financed by private companies like Abbott. These companies, naturally, base manufacturing on projected profits. Abbott’s C.E.O. said last year that the company underestimated demand.

The result is a testing shortage, and a decentralized system in which schools, hospitals — and companies — are competing to get tests. “It doesn’t surprise me that many organizations who were recognizing they need these tests to stay in business were buying them,” said Joseph Allen, an associate professor at Harvard. “A smart testing strategy would have flooded the market with these, so they don’t have to be hoarded.” With testing kits scarce, some health experts are questioning the distribution of tests to white-collar employees who work from home.

The testing perks at big companies take many forms: Google will send its full-time employees in the U.S. free at-home Cue Health tests that retail for more than $70 each. BlackRock offers tele-health supervision as employees self-administer rapid tests for international travel (an option it began over the December holidays). TIAA has offered free at-home testing since late 2020, even though the majority of its employees have been working from home.

For others, it’s a tougher go: “We’re the epicenter of the epicenter, and I can’t get test kits anywhere,” said Thomas Grech, president of the Queens Chamber of Commerce.

In other virus news:

The Fed is ready to raise rates, Jay Powell says. The central bank’s chairman told lawmakers yesterday that his biggest focus was combating persistently climbing inflation, which required raising interest rates. But Powell said he was also mindful of moving too fast and cooling off the economy. Stocks rose on the comments.

Novak Djokovic admits to a false statement in his travel papers. The Serbian tennis star said he should not have gone ahead with an interview after receiving a positive coronavirus test result in December, and conceded an error in his declaration to Australian border authorities. Australian officials are investigating other discrepancies as they weigh whether to cancel his visa (again).

The U.S. may limit Medicare coverage of the contentious Alzheimer’s drug Aduhelm. Government officials proposed paying for the expensive treatment’s use only for patients in approved clinical trials, a decision that could sharply curtail its reach. Shares in Aduhelm’s maker, Biogen, fell on the news.

Bank of America cuts overdraft fees. The lender said it would reduce the penalties by two-thirds, to $10, and eliminate other related charges. It’s the latest move by U.S. banks to scale back overdraft fees amid scrutiny by regulators and complaints by consumers.

Citigroup exits its Mexican consumer business. The U.S. bank said it would divest Banamex, which runs its biggest branch network, to simplify its operations. Citi’s move will sever its ties to a business that had brought big revenues — and cost it hundreds of millions in fines.

The F.T.C.’s case against Meta becomes a reality

The Federal Trade Commission has made a breakthrough in its efforts to rein in Big Tech. Yesterday, a federal judge allowed most of the government’s refiled antitrust lawsuit against Facebook — now Meta — to proceed.

Only part of the case can go ahead. Judge James Boasberg, who last year threw out the F.T.C.’s initial case, said the agency’s latest claim that Facebook abused its monopoly power through “buy-or-bury” acquisitions was “far more robust and detailed than before.” But the judge said the agency’s case on Facebook’s management of third parties from its platform lacked enough evidence to go forward.

The F.T.C. has to prove that Facebook hurts customers, not just competitors, the judge said.That could give Facebook the upper hand in the case, because harm is usually described as higher prices, and Meta doesn’t directly charge the users of Facebook, Instagram or WhatsApp. But Jason Klint, who heads Digital Content Next and is an expert on antitrust and data issues, said the judge also noted that if the government was able to show that Facebook harmed the “competitive process,” that would most likely prove, by extension, that it harmed consumers.

But the F.T.C.’s case is largely about the past, said the tech journalist Casey Newton. The agency claims that Facebook used the acquisitions of Instagram and WhatsApp to stifle competition. But those acquisitions happened in 2012 and 2014, respectively. Absent from the case are more recent acquisitions in the V.R. space. And in the time the government took to refile its case, Newton noted, TikTok has done more damage to Facebook’s social media dominance than the government is likely to do. Still, the F.T.C.’s case puts Meta on notice.

A Guide to Cryptocurrency

A glossary. Cryptocurrencies have gone from a curiosity to a viable investment, making them almost impossible to ignore. If you are struggling with the terminology, let us help:

Bitcoin. A Bitcoin is a digital token that can be sent electronically from one user to another, anywhere in the world. Bitcoin is also the name of the payment network on which this form of digital currency is stored and moved.

Blockchain. A blockchain is a database maintained communally, that reliably stores digital information. The original blockchain was the database on which all Bitcoin transactions were stored, but non-currency-based companies and governments are also trying to use blockchain technology to store their data.

Cryptocurrencies. Since Bitcoin was first conceived in 2008, thousands of other virtual currencies, known as cryptocurrencies, have been developed. Among them are Ether, Dogecoin and Tether.

Coinbase. The first major cryptocurrency company to list its shares on a U.S. stock exchange, Coinbase is a platform that allows people and companies to buy and sell various digital currencies, including Bitcoin, for a transaction fee.

Crypto finance. The development of cryptocurrencies spawned a parallel universe of alternative financial services, known as Decentralized Finance, or DeFi, allowing crypto businesses to move into traditional banking territory, including lending and borrowing.

NFTs. A “nonfungible token,” or NFT, is an asset verified using blockchain technology, in which a network of computers records transactions and gives buyers proof of authenticity and ownership. NFTs make digital artworks unique, and therefore sellable.

“You are making a catastrophic epidemic for your political gain.”

Mnuchin’s mail and the digital dollar

This time last year, Treasury Secretary Steven Mnuchin was the target of the crypto industry’s ire for rules proposed in the Trump administration’s final days. The “midnight rule-making” incited a resistance movement, with industry groups generating a flood of comments from the public.

Now a CoinDesk investigation of hundreds of pages of Mnuchin’s communications reveal that, though he ignored or diverted many industry communications on the new rules, digital assets came up early and pretty often during the Trump administration.

“The emails show a lot of internal deliberations,” CoinDesk’s managing editor for global policy and regulation, Nikhilesh De, told DealBook. That includes an “ahead of the curve” 2018 message to Mnuchin from Jared Kushner, President Donald Trump’s adviser and son-in-law. “Really early on,” De notes, before most policymakers were talking about central bank digital currencies, or C.B.D.C.s, Kushner suggested a meeting to consider a digital dollar.

“My sense is it could make sense,” Kushner wrote of a C.B.D.C. Whether a meeting with Mnuchin took place is unclear. In 2019, China became intent on creating a digital yuan and C.B.D.C.s were something other governments could no longer ignore. Jay Powell, the Fed chairman, said yesterday that a report on a digital dollar promised in the fall would be out in weeks. Meanwhile, China’s digital yuan wallet recently became one of the country’s most downloaded apps within a week of release.

The Biden administration has been more active on digital assets, and seemingly more responsive to the industry. Mnuchin ignored many pleas, CoinDesk found, whereas the burgeoning crypto lobbying contingent in Washington is now getting through, pushing policy proposals in meetings with Biden administration officials and other leaders around the world.

Price inflation is expected to pop again as policymakers await an elusive peak.

The S&P 500 falls into correction territory with its sharpest daily drop in a year.

Can I Reveal a Colleague’s Covid Diagnosis?
28 mins ago

How to Get Through a Power Outage
52 mins ago