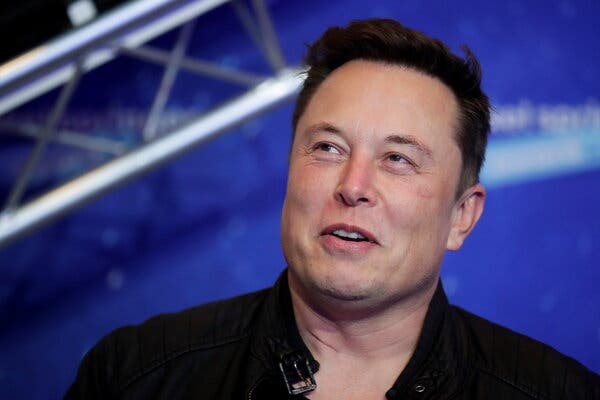 Elon Musk said he wants to “transform” Twitter by taking it private.Credit…Hannibal Hanschke

Elon Musk has succeeded in convincing Twitter to accept his takeover offer, which would make the world’s richest man, who runs the most valuable car company, the owner of one of the most influential social networks. The $44 billion Twitter deal is set to be the biggest leveraged buyout in at least two decades, according to Dealogic.

But while we know now that Twitter is probably getting a new owner, plenty of questions remain about what happens next.

What’s the business plan? A typical press release about a deal offers insight into turnaround plans, synergies or growth targets. Not Twitter’s. Instead, Musk said in the statement that he wants to eliminate spammers and promote free speech. He will have more leeway to act outside of the glare of public shareholders, but his overall strategy is not clear yet.

How will Musk’s free speech vision for Twitter play out? Angelo Carusone, the C.E.O. of the nonprofit Media Matters for America, told DealBook that Musk’s view of free speech is “muddled,” because it elevates all information equally, including potentially extreme views and disinformation. “Twitter has been a vanguard when it comes to policy,” Carusone said. “I worry about what this will do to the rest of the landscape.”

Will Musk use Twitter to troll the S.E.C.? Musk is still in trouble with the agency over his tweets about getting “funding secured” to take Tesla private in 2018. As part of his settlement with the agency, in which Musk neither admitted nor denied wrongdoing, he also agreed to stay mum about the case. But he has recently said that he was “forced” into a settlement, and he tweeted yesterday that S.E.C. officials were “shameless puppets.” His ability to secure funding to acquire Twitter is unlikely to make him more meek. (The S.E.C. did not respond to a request for comment.)

How does China play into this? Jeff Bezos is one of many questioning whether Tesla’s sizable dependence on China might give the country some influence on decision-making at Twitter, whose service has been blocked in China for years.

How many jobs does Musk have now? In addition to soon owning Twitter, Musk leads Tesla and the rocket maker SpaceX. He also owns the Boring Company, a tunnel-digging firm, and Neuralink, a brain-tech company. Will he be able to juggle it all? Recall that a main reason that the activist investor Elliott Management pushed for Jack Dorsey’s ouster as Twitter’s C.E.O. was that he couldn’t effectively run two companies.

Fears of a Covid-related lockdown in Beijing are growing. Testing lines grew as the city reported 22 new locally transmitted cases today. A lockdown could further disrupt supply chains, but China’s central bank said it would support the economy, giving a lift to stock markets this morning.

A New York judge holds Donald Trump in contempt of court. According to the court order, Trump failed to comply with a subpoena from Attorney General Letitia James and will be fined $10,000 a day until he does.

The Senate votes to advance Lael Brainard’s nomination for the No. 2 spot at the Fed. A vote on her confirmation is expected this week. If confirmed, she would be the second woman, after Treasury Secretary Janet Yellen, to serve as Fed vice chair.

President Biden nominates an ambassador to Ukraine. Bridget Brink’s nomination comes after a long delay in replacing the ambassador removed by President Donald Trump in 2019, and as the U.S. signals it wants to see Russia weakened to prevent future military aggression.

Two fathers convicted in the college admissions scandal are appealing. A former private equity investor and a former casino executive, two of about 50 parents and coaches accused of conspiring with a college admissions counselor to obtain “side door” admissions for their children, argue that university donations are commonplace and do not constitute bribery.

Betting on Bitcoin for retirement

Fidelity, the nation’s largest provider of 401(k) plans, will allow retirement account holders to invest some of their funds in Bitcoin. The cryptocurrency option could be available as early as the middle of this year.

The move could give millions of Americans a significantly easier on-ramp to cryptocurrencies than ever before, The Times’s Tara Siegel Bernard reports. Employers, though, would still have to OK the change, which would add a new digital asset account to 401(k) plans, alongside more traditional stock and bond mutual fund options. Companies, called plan sponsors in the retirement accounts world, have been reluctant to allow Bitcoin in 401(k)s. But attitudes appear to be changing. “We started to hear a growing interest from plan sponsors, organically, as to how could Bitcoin or how could digital assets be offered in a retirement plan,” said Dave Gray, head of workplace retirement offerings and platforms at Fidelity Investments.

Just Bitcoin. Fidelity is only allowing investors to buy Bitcoin, and not other more esoteric cryptocurrencies like Dogecoin. Employers will determine what percentage of assets their employees can allocate to Bitcoin, up to an initial cap of 20 percent imposed by Fidelity. The accounts will also charge fees of as much as 0.9 percent, which is higher than traditional retirement accounts.

There could be some regulatory hurdles ahead. Regulators have already said they’re skeptical of the idea. Last month, the Department of Labor said it would look closely at plans that offered Bitcoin.

“I’m worried that we traded a temporary growth gain for permanently higher inflation.”

— Jason Furman, an economist at Harvard and a former Obama adviser, on the legacy of the U.S.’s pandemic response. The U.S. spent aggressively to protect its economy, but the benefits — rapid growth and a hot labor market — could be diminished by high inflation, especially if it pushes the Fed to set policy that touches off a recession.

A look under the hood of the trucking industry

Warnings about a truck driver shortage have been getting louder recently. The American Trucking Association says the U.S. is 80,000 drivers short. Retailers like Walmart are willing to pay six-figure starting salaries to attract new hires. Some drivers, though, tell a different story. They say there isn’t a shortage of people qualified to get behind the wheel, but rather a growing number of drivers who are leaving the industry because they are fed up with tough working conditions and unreliable schedules.

There are drivers out there — they are just increasingly working for themselves. In the wake of the pandemic, many shipping offices and warehouses have imposed strict restrictions on drivers, down to access to bathroom facilities. “Truck drivers are given the least amount of respect on the roads and really anywhere,” Cody Coble, 33, who has been hauling loads for nine years and has been around the industry his entire life (his father was a truck driver), told DealBook. Coble has driven for companies like Southeastern Freight Lines and Whole Foods. But this year he became an owner-operator with his own truck.

Conversations about trucker shortages tend to overlook owner-operators. Owner-operators make up an increasingly large share of trucking capacity. “We’ve seen the largest number of new fleets enter the trucking market in history over the past two years,” Craig Fuller of FreightWaves, which tracks logistics market data, told DealBook. Those new smaller operators have added some 170,000 trucks available for dispatch.

Self-driving vehicles could be another reason fears about a driver shortage are overblown. TuSimple, an autonomous trucking company, has a contract with UPS for deployment next year. Jim Mullen, TuSimple’s chief administrative and legal officer, said the company planned to deploy self-driving trucks “without any human interaction whatsoever” by the end of 2023 and then scale to thousands of trucks in 2025. But many remain skeptical that the trucking industry can make the technological leap that fast. “It may not even happen in our lifetime,” said Spencer Barkoff, a co-founder of Relay Payments, a sort of Venmo or PayPal for the transportation industry. “Our industry is still paying with cash and paper checks. Things are still getting faxed.”

About 500,000 jobs could eventually be eliminated by self-driving trucks, a recent University of Michigan study found. The researchers told DealBook that the truck drivers they interviewed for the study believed automation was coming, but weren’t nervous about it. Most of the drivers interviewed, however, were older and believed automation wouldn’t happen until after they retired.

Tags
Musk Off That Twi̇tter Will

Nuclear Power Could Help Europe Cut Its Russia Ties, but Not for Years

‘Yeah, That Happened.’ A Giants Player Is Slapped Over Fantasy Football.
2 hours ago