An upsurge in teenagers requesting hormones or surgeries to better align their bodies with their gender identities has ignited a debate among doctors over when to provide these treatments.

An international group of experts focused on transgender health last month released a draft of new guidelines, the gold standard of the field that informs what insurers will reimburse for care.

Many doctors and activists praised the 350-page document, which was updated for the first time in nearly a decade, for including transgender people in its drafting and for removing language requiring adults to have psychological assessments before getting access to hormone therapy.

But the guidelines take a more cautious stance on teens. A new chapter dedicated to adolescents says thatthey must undergo mental health assessments and must have questioned their gender identity for “several years” before receiving drugs or surgeries.

Experts in transgender health are divided on these adolescent recommendations, reflecting a fraught debate over how to weigh conflicting risks for young people, who typically can’t give full legal consent until they are 18 and who may be in emotional distress or more vulnerable to peer influence than adults are.

Some of the drug regimens bring long-term risks, such as irreversible fertility loss. And in some cases, thought to be quite rare, transgender people later “detransition” to the gender they were assigned at birth. Given these risks, as well as the increasing number of adolescents seeking these treatments, some clinicians say that teens need more psychological assessment than adults do.

“They absolutely have to be treated differently,” said Laura Edwards-Leeper, a child clinical psychologist in Beaverton, Ore., who works with transgender adolescents.

Dr. Edwards-Leeper was one of seven authors of the new adolescent chapter, but the organization that publishes the guidelines, the World Professional Association for Transgender Health, did not authorize her to comment publicly on the draft’s proposed wording.

On the other side of the debate are clinicians who say the guidelines are calling for unnecessary barriers to urgently needed care. Transgender teens have a high risk of attempting suicide, according to the Centers for Disease Control and Prevention. And preliminary studies have suggested that adolescents who receive drug treatments to affirm their gender identity have improved mental health and well-being. Considering those data, some clinicians are opposed to any mental health requirements.

“I’m really not a believer in requiring that for people,” said Dr. Alex Keuroghlian, a clinical psychiatrist at Fenway Health in Boston and the director of the Massachusetts General Hospital Psychiatry Gender Identity Program. “Being trans isn’t a mental health problem,” he later added.

The public is invited to comment on the guidelines until Sunday, with a final version expected by spring.

As clinicians debate the intricacies of the new health standards, state legislatures across the country are trying to ban gender-affirming medical care for adolescents. According to the Williams Institute at the UCLA School of Law, 21 states introduced such bills last year. Gov. Greg Abbott of Texas has described gender surgeries as “genital mutilation” and “child abuse.”

Professional medical groups and transgender health specialists have overwhelmingly condemned these legal attempts as dangerous. So far, two have passed into law, in Tennessee and Arkansas, though the latter has temporarily been blocked because of legal appeals.

Some clinicians worry that public disagreement over the best way to care for transgender adolescents will add fuel to this simmering political movement.

“It’s a stressful environment to be in,” said Dr. Cassie Brady, a pediatric endocrinologist at Vanderbilt University Medical Center who provided legislative testimony to make the bill in Tennessee less restrictive. “It not only puts fear in us as providers, but way more fear I think for families who might be trying to balance this.” 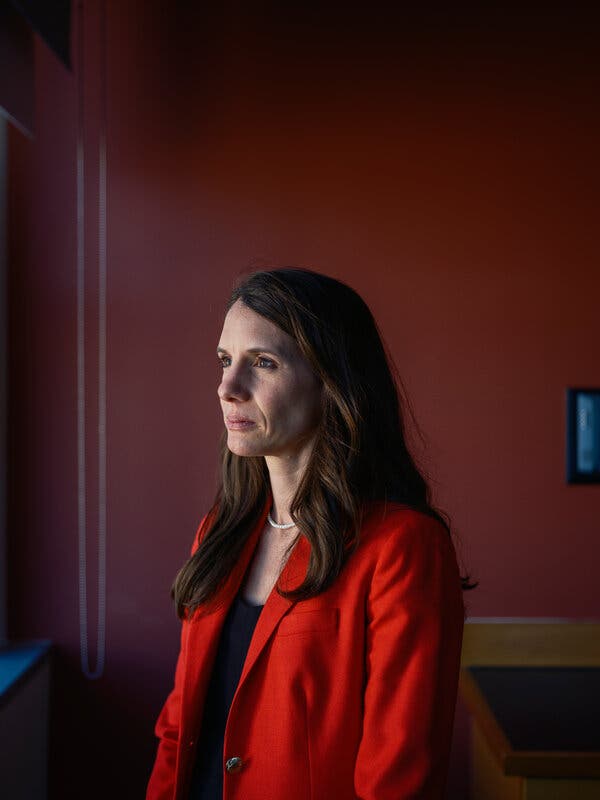 The first version of the guidelines, called the Standards of Care, was released by a small group of doctors at a San Diego meeting in 1979. At the time, there was little public acknowledgment of transgender people, and they had scant options for medical care.

The document “was a real shift,” said Beans Velocci, a historian at the University of Pennsylvania.

But those first guidelines characterized gender nonconformity as a psychological disorder. They stated that transgender people could be delusional or unreliable, and required two letters from psychiatrists before adults could access surgeries. That focus on psychology set a lasting precedent, experts said.

“The establishment medical world didn’t even understand it — they were still treating it as a mental health concern — just 20 years ago,” said Dr. Joshua Safer, an endocrinologist and executive director of the Center for Transgender Medicine and Surgery at Mt. Sinai, who contributed to the guidelines’ chapter on hormone therapy.

Children and teenagers struggling with their gender identities did not get much attention from the medical community until the 1990s, when two contrasting models emerged.

In one approach, clinicians in the Netherlands suggested that parents wait for puberty to make decisions about their children transitioning to another gender, pioneering the use of drugs that suppress the production of hormones like testosterone and estrogen. The Dutch model argued that these puberty blockers, which are reversible, would buy adolescents time to further explore their gender before starting hormones with more lasting consequences.

In another model, which was developed in Canada and is now considered a form of “conversion therapy,” children were pushed to live in the gender they were assigned at birth, in order to avoid drugs or surgeries down the line for those who might later change their minds.

Around the late 2000s, clinicians in the United States introduced the “gender affirming” approach, which has since been endorsed by several major medical groups. Its basic philosophy: Minors should be able to live out their gender identities freely, without clinicians or parents imposing unnecessary delays. Their path might involve medications and surgeries, or no medical treatments at all.

“Children are not short adults — but they have autonomy as well, and they can know their gender,” said Dr. Diane Ehrensaft, director of mental health at the University of California, San Francisco Child and Adolescent Gender Center. Dr. Ehrensaft is one of the key early proponents of thegender-affirming model and helped write a new chapter on prepubescent children in the draft guidelines.

Data on the number of transgender or gender nonconforming adolescents and adults in the United States are limited. About 1.8 percent of high school students surveyed in 19 state or urban school districts in 2017 described themselves as transgender, according to the C.D.C.

Adolescent gender clinics like Dr. Ehrensaft’s have seen a rapid growth in referral rates, and more sites have sprung up to meet demand. Today there are more than 50 such specialty clinics in the United States, she said, up from just four in 2012.

Few studies have followed adolescents receiving puberty blockers or hormones into adulthood. Dr. Ehrensaft and others are now working on large, long-term studies of patients in the United States.

The new standards state that clinicians should facilitate an “open exploration” of gender with adolescents and their families, without pushing them in one direction or another. But the guidelines recommend restricting the use of medications and surgeries, partly because of their medical risks.

Puberty blockers, for example, can impede bone development, though evidence so far suggests it resumes once puberty is initiated. And if taken in the early phase of puberty, blockers and hormones lead to fertility loss. Patients and their families should be counseled about these risks, the standards say, and if preserving fertility is a priority, drugs should be delayed until a more advanced stage of puberty.

The guidelines suggest minimum ages, lower than those in the previous version, for each treatment: 14 for starting hormone therapy, 15 for chest masculinization and at least 17 for more invasive genital operations.

But the most contentious parts of the new standards among clinicians are the mental health requirements. Before discussing any medical treatment, they say, adolescents must get a “comprehensive assessment” led by mental health providers, and must have consistently questioned their gender identity for “several years.”

Dr. Alex Keuroghlian, a clinical psychiatrist at Fenway Health in Boston, said, “I’m really not a believer in requiring” therapy before transitioning. “Being trans isn’t a mental health problem,” he said.Credit…M. Scott Brauer for The New York Times

Although mental health counseling should be offered as needed, it should not be a requirement for medical care, said Dr. Keuroghlian of Fenway Health. He pointed out that therapy is not required for cisgender patients who get breast augmentation, hysterectomies or rhinoplasties.

“To make that a requirement for everybody is inherently unnecessary gatekeeping and also stigmatizing and pathologizing and a waste of resources,” he said.

What’s more, some of the mental health problems commonly seen in trans adolescents, such as depression and anxiety, may resolve after gender-affirming medical care, Dr. Keuroghlian said.

And some doctors have also argued that waiting several years to initiate medical treatments could itself be harmful.

But other trans health specialists are concerned by the sharp increase in adolescents who are referred to gender clinics, and worry that the desire for hormones and surgeries may be driven partly by peer influence on social media platforms like TikTok and YouTube.

“The kids presenting these days are very different than what I was seeing in the early days,” said Dr. Edwards-Leeper, who in 2007 helped set up one of the first youth gender clinics in the United States, in Boston.

Dr. Edwards-Leeper said that now she was more likely to see adolescents who had recently begun to question their gender, whereas a decade ago her patients were more likely to have longstanding distress about their bodies.

These seemingly abrupt changes — as well as other mental health issues or a history of trauma — should be flags for providers to slow down, she said. Instead, some gender clinics with long wait lists are “blindly affirming” adolescent patients, she said, offering them hormones without taking these potential issues seriously.

“These issues of inadequate assessment and what I sometimes called hasty or sloppy care have resulted in potential harm,” saidErica Anderson, a clinical psychologist who works with transgender adolescents in Berkeley, Calif.

Dr. Anderson, 70, said she understood the trauma of being denied care. She first realized she was transgender in her 30s, but didn’t approach an endocrinologist about hormone treatments until age 45. “The doctor’s response was, ‘I can’t help you,’” she said. Despondent, she waited several more years before pursuing a medical transition again.

“I don’t want any young person to go without the care that they need,” Dr. Anderson said. “But the question is, are there new things going on that weren’t going on 10 or 15 years ago?”

Other doctors say they haven’t seen evidence to suggest that clinics are hastily providing medical treatments, or that many patients are experiencing regret about taking hormones. But they agree that teenagers require more mental health precautions than adults do.

“With kids, you’re more conservative,” said Dr. Safer of Mt. Sinai. But, he added, “I guess time and data will tell.”

A Shrinking Band of Southern Nurses, Neck-Deep in Another Covid Wave

Can I Reveal a Colleague’s Covid Diagnosis?
16 mins ago

How to Get Through a Power Outage
40 mins ago