What it did not have, at least consistently, was a place to play soccer.

Early this year, just as Angel City’s players began arriving in Los Angeles for the team’s inaugural season, an agreement the team had made to use the Los Angeles Rams’ practice fields at California Lutheran University was put on hold. The issue? The N.F.L. team was on a Super Bowl run and still using them.

Adjusting on the fly, Angel City arranged to spend the first few weeks of its preseason at Pepperdine University. But just as the players were to return to Cal Lutheran, team officials decided the school’s turf football field they had been given wasn’t adequate. They canceled training, and the players were offered a spa day instead.

“Every start-up has to adjust and pivot: I’m comfortable with those last-minute changes. Having said that, we have 24 players and a coaching staff of 20, and it’s not as easy for them,” said Julie Uhrman, Angel City’s president and one of its founders, adding, “Sometimes we fall short of delivering for the players, and it’s devastating.”

Missteps for a new team aren’t surprising. But to veterans of the N.W.S.L., Angel City’s early problems — not only its field issues, but also the idea that professional athletes would prefer a spa day to a rigorous practice only weeks before their first game — were concerning signs of how far even the league’s best-funded teams still need to go. 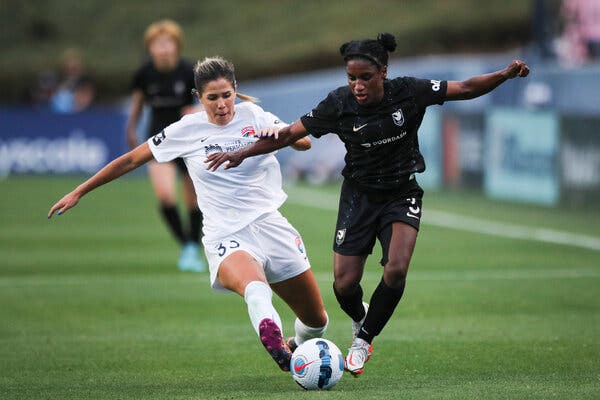 Katie Johnson of the San Diego Wave, left, and Jasmyne Spencer of Angel City F.C. Both teams are new to the N.W.S.L. this season.Credit…Meg Oliphant/Getty Images

“That’s exactly what I mean when I talk about operational rigor,” Jessica Berman, the new N.W.S.L. commissioner, said when asked about her immediate priorities. “It is the sort of stuff behind the curtain — how the sausage gets made — that really paves the way for the league’s growth. The commercialization and the revenue will flow from creating an infrastructure within the league that is consistent, professionalized, credible, reliable.”

Yet as the league opens its 10th regular season this weekend, Angel City’s stumbles on the basics, after a year in which the N.W.S.L. was rocked by claims of player mistreatment, have many around the league once again asking:

A player-led push for change

“Enough is enough,” one veteran player said of the mind-set that saw N.W.S.L. pros take a more active role in the direction of their league.Credit…Bill Streicher/USA Today Sports, via Reuters

The arrival of Angel City, along with a second new franchise in San Diego, was expected to offer a fresh start for the N.W.S.L. after a very public reckoning last year. In a matter of months, five of the league’s 10 head coaches were fired or resigned for off-field conduct, including one who was accused of coercing a player to have sex with him. (Yet another coach, James Clarkson of the Houston Dash, was suspended on Tuesday over unspecified findings in a continuing review of “current and historic complaints of discrimination, harassment and abuse.”)

The scandals were an existential moment for the league. Its commissioner, criticized for mishandling reports of coaches abusing and bullying players, resigned. Team owners faced hard questions about their own failings. Even some of the league’s most devoted fans turned on their teams, demanding answers and accountability.

The players took it a step further: For one remarkable week, they refused to play at all.

Veteran players said the show of player power was not new. Things had been changing, they said, since the league’s early years, when sponsors came in the form of family-run meatpacking businesses, broadcast deals were next to nonexistent and players were reluctant to ask for more.

“Keeping everything quiet, dealing with it, sucking it up because we just need to make progress and we don’t want to do anything that could hurt the league,” Yael Averbuch West, the general manager of Gotham F.C. and a former player, said of the mind-set in the early years of the league.

Consecutive World Cup victories by the United States women’s team — a squad that was led by N.W.S.L. stars and was waging a concurrent, and public, fight for equal pay — helped change that. To many rank and file N.W.S.L. players, there was a growing recognition that the league did not exist to support or protect them. A players’ union was formed in 2017 and officially recognized a year later.

“It felt like there was a momentum shift,” said Jasmyne Spencer, a 10-year veteran of the N.W.S.L. “Enough is enough. We make the league, and we can start to demand things we need to make the league successful.”

But even as salaries rose and standards improved, the league still “unilaterally wrote all the rules,” the executive director of the players’ union, Meghann Burke, said. A shift in the balance of power came only last summer, when reports in The Athletic and The Washington Post documented widespread player abuse.

“At some point it was like, ‘All right, we’ve got to band together as players to get more,’” Tori Huster, the president of the players’ union and a midfielder for the Washington Spirit, said. “That’s going to be the only way forward.”

Concrete progress came within months: On Jan. 31, the N.W.S.L. and the players’ union ratified the league’s first collective bargaining agreement. The contract raised minimum salaries to $35,000 a year and annual compensation by 30 percent through improved benefits like year-round housing, transportation and health insurance. The agreement also introduced paid leave for pregnancy and mental health, and laid out, for the first time, a path to free agency.

The task now, according to players, executives and others around the N.W.S.L., is figuring out what exactly the league will look like in its second decade and beyond.

Is it a serious investment opportunity? Or a branding exercise in performative feminism? Is it an exciting product for fans? The best women’s soccer league in the world? A workplace with formalized employee protections?

And can it be all of these things at once?

If the league’s first momentum shift was one of collective action by its players, the second was the introduction of a club like Angel City, a team conceived, founded and run by women.

Angel City executives are eager to discuss the club’s goals, which include a focus on investing in Los Angeles — club sponsors are required to put 10 percent of the value of their sponsorships into local organizations — and equity for its players. Angel City players who allow the use of their likeness to promote the club, for example, will receive 1 percent of net ticket revenue this season.

It’s a difficult line to walk, though, to be seen as both a charitable endeavor and a business opportunity dusted by celebrity — all while fielding a competitive team.

“The shiny veneer, the incredible photo op, the great social media branding is one thing, but how will this actually affect the lived experience of these athletes?” said Dr. Courtney M. Cox, an assistant professor at the University of Oregon who studies issues of labor, identity and technology in sports. “What is this actually doing for anyone besides the investors themselves being able to say, ‘Look I own a team’?”

Further complicating the glowing reception that Angel City has received is the assumption that a club founded by women — Uhrman, the actress Natalie Portman and Kara Nortman, a venture capitalist — and majority-owned by women somehow guaranteed things would be better for its women’s players.

Much of Angel City looks promising: It has sold more than 15,000 season tickets and has agreements for at least $35 million in sponsorships. But much of it looks the same, too: high-profile celebrity ownership — common in men’s professional sports — and a reliance on facilities owned and operated by men’s teams.

Angel City F.C. played its preseason games at California State University, Fullerton, but will move to the Banc of California Stadium for the regular season. Credit…Meg Oliphant/Getty Images

The harder work of building a good team is still ahead, and still uncertain. Angel City took nearly a month to win a game, and it did so only over a weekend when a coronavirus outbreak devastated its opponent. Its play has been aggressive but often disorganized, its growing pains masked by brief moments of cohesion and occasional flashes of brilliance.

Yet for Angel City’s players, creating a professional environment in which they can focus on soccer has not always seemed to be the club’s top priority. Instead, many players are exasperated, weary of uncertain field situations, inconvenient training times and schedule changes.

In March, Angel City announced a partnership with Cal Lutheran that included reconstructing a grass field the team would use. But that field won’t be ready until June 1 — a month after the Rams will have returned to their training fields.

That means, once again, Angel City will have to adjust. The Rams’ fields are only available for Angel City to use in the afternoons, leaving players to wait around most of the day for practice and then crawl home in rush-hour traffic.

Allison McCann is a reporter and graphics editor covering civil rights, criminal justice and, occasionally, women’s soccer for The Times. She was previously based in London on the International desk. @atmccann

Labor’s Disenchantment in Ohio Puts Even Democratic Veterans at Risk

A Heart-Pounding Supercar Aims to Upend How Cars Are Built

‘Yeah, That Happened.’ A Giants Player Is Slapped Over Fantasy Football.
2 hours ago