Russia’s invasion of Ukraine created new fears, and the Swedes, dragged along by Finland, are expected to apply, reluctantly, to join the alliance and its collective defense.

TOFTA, Sweden — The Gotland regiment of the Swedish Army was going through its paces, practicing how to use its Swedish-designed lightweight anti-tank missiles, the NLAWs, that are proving so effective in Ukraine.

The regiment, which was resurrected in 2018 on this strategic island that helps control the air and naval space of the Baltic Sea, is in the process of rebuilding with the aim of expanding to 4,000 soldiers from the current 400 — still a far cry from the 25,000 that served here during the Cold War.

In a major recalculation of its security posture precipitated by the Russian invasion of Ukraine, Sweden is relearning how to be a military power. And pulled along by its strategic partner, Finland, it is about to apply to join NATO, ending more than 200 years of neutrality and military nonalignment.

The new commander of the Gotland regiment, Col. Magnus Frykvall, has a clear view of this mission to rebuild Sweden’s defenses, as well as the importance of the island his regiment is guarding. “If you own Gotland, you can control sea and air movement in the whole of the south Baltics,’’ he said.

To join NATO is a political decision, Colonel Frykvall, 47, said, but he favors it. “Cooperation is one thing, but an alliance is something else,” he said. “An alliance means you have guarantees.” 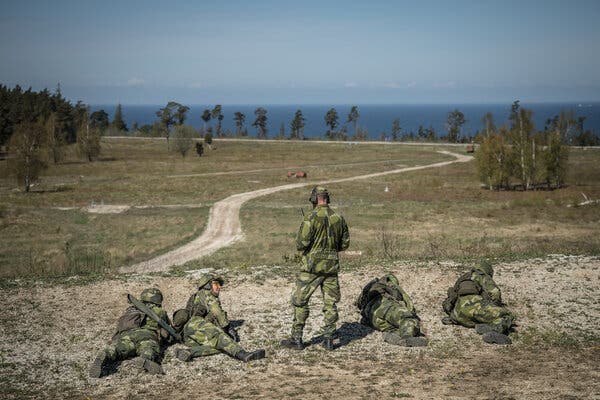 Troops with the Gotland regiment at target practice. The outfit’s numbers will be hiked to 4,000 from the current 400.

Troops reload their machine guns during the shooting practice on Gotland island.

One of his troops, Pvt. Sara Karlsson, 20, an artillery specialist, said that “every soldier here now feels that we’re making a difference, and I feel it in my colleagues too, a new sense of responsibility.”

The world is dangerous, and there is always a war somewhere, she said. “But Ukraine is not far from Gotland, and we can feel it.”

If Russia’s annexation of Crimea in 2014 was a quiet wake-up call, its bloody, full-scale invasion of Ukraine in February was a five-alarm fire.

“We had our dream and now it’s time to wake up,” said Robert Dalsjo, director of studies at the Swedish Defense Research Agency. “The dream is ended.”

Sentiment in Finland, having fought two wars against the Soviet Union, has swung massively in the last six months in favor of joining NATO, guided by Sauli Niinisto, its president.

Now, nearly 80 percent of Finns support joining, compared with only 20 percent before the war. On Thursday, Mr. Niinisto and Prime Minister Sanna Marin made public their support for Finland’s application, with a parliamentary vote expected on Monday.

But in Sweden, the debate is more of a psychodrama within the ruling Social Democratic Party, with Prime Minister Magdalena Andersson ruling out NATO membership for Sweden as late as March 8, after the Russian invasion. But by mid-April, her position had evolved.

“There is a before and after 24 February, the security landscape has completely changed,” she said. “Given the situation, we have to really think what is best for Sweden and our peace in this new situation.”

The Swedish public has followed along, with 52 percent now favoring joining NATO, especially if Finland joins, up from about 27 percent before the war.

On Sunday, after discussions with members from all 26 of the country’s districts, the Social Democrats will announce their decision, said Kenneth G. Forslund, a member of the party executive and chairman of the Parliament’s Committee on Foreign Relations. The consensus is that the party will reluctantly back joining NATO alongside Finland.

“We and the Finns belong together,” said Carl Bildt, a former prime minister. “If we were outside on our own, we would be a 1960s nostalgia museum.”

Few analysts in either country doubt that the two countries will apply jointly, and that NATO will rapidly accept. Both Washington and London — Washington quietly, London loudly — have provided bilateral security assurances to both countries while their applications are ratified.

The commander of the Gotland regiment, Col. Magnus Frykvall. “If you own Gotland, you can control sea and air movement in the whole of the south Baltics,’’ he said.
The town of Visby on Gotland island.

For Sweden and Finland, “times have changed,” said Bjorn Fagersten of the Swedish Institute of International Affairs. “It’s a new normal, a new world.”

After the collapse of the Soviet Union, Stockholm decided that war was a thing of the past. It removed nearly all of its forces from Gotland, and reduced the national army by around 90 percent and the navy and air force by about 70 percent. It was a decision that a retired colonel, Mats Ekeroth, who runs a military museum on Gotland, dismissed as “absolutely idiotic.”

The last time Gotland was invaded was in 1808 — by Russia. The 1,800 Russians were driven off in a month, but, as a parting shot, Russia wrested Finland away from the Swedes. Only six years later, in 1814, Sweden fought its last war.

So Russia has always been a looming presence in the Nordic countries. Russia’s fleet in Kaliningrad is only 200 miles away, and so are its Iskander nuclear-capable missiles.

“Suspicion of Russia goes back a long time, some 700 years,” said Niklas Granholm, also of the Swedish Defense Research Agency. He added: “This war against Ukraine won’t be forgotten for a couple of generations, that this is what Russia is really like.”

People were chilled even before the invasion, when President Vladimir V. Putin of Russia warned Sweden and Finland of “retaliation” should they join NATO.

“Putin’s direct threats have had the opposite effect,” said Mr. Dalsjo. “The perceived threat level has really risen,” driving both nations toward joining NATO.

Sweden’s international reputation is one of neutrality, peacekeeping, nuclear disarmament, gender equality and a “feminist foreign policy.” Swedes in general, as Mr. Bildt joked, “consider ourselves the enlightened voice of humanity.”

Finland’s NATO membership bid. Finland’s leaders announced their support for the nation to join the alliance, while Sweden is expected to do the same within days. The Kremlin said that Finland’s possible accession was a threat and that Russia would “take necessary measures” to protect itself.

On the ground. Ukrainian and Western officials said Russia is reportedly withdrawing forces from around Kharkiv, Ukraine’s second-largest city, where it has been losing territory. The officials said Moscow may redirect troops to the southeast, where Russian troops are making greater progress.

Civilian killings. The United Nations human rights chief said that the bodies of more than 1,000 civilians, including several hundred who were summarily executed, have been recovered in areas near Kyiv that were occupied by Russian forces in the early stages of the invasion.

American aid. The House voted 368 to 57 in favor of a $39.8 billion aid package for Ukraine, which would bring the total U.S. financial commitment to roughly $53 billion over two months. The Senate still needs to vote on the proposal.

But its changes are not as sudden as they appear. Even under Olof Palme, whose sharp criticism of the Vietnam War annoyed Washington, Sweden had a working relationship with Moscow but also a close, quiet, bilateral defense relationship with the United States.

It was a secret relationship for many years, known as “the hidden alliance,” though it was revealed to Moscow by a prominent Swedish spy. As Mr. Bildt said, “it was a policy known to the Russians but not to the Swedes.”

Fighting for nuclear disarmament and peace while trying to “build bridges” to Moscow was not contradictory to ensuring Sweden’s ability to defend itself with American and British help.

Indeed, while promoting disarmament, Sweden is quietly one of the world’s largest arms manufacturers per capita, with important companies like Saab, which makes fighter jets, and Bofors, now a part of Britain’s BAE Systems.

Sweden also became a major exporter of arms; in 2021, its arms industry exported $2 billion worth of weapons despite restrictions on selling to dictatorships or countries at war — Ukraine now being a major exception.

After the collapse of the Soviet Union, both Sweden and Finland moved closer to the West, dropping neutrality to apply to join the European Union in 1992 and NATO’s Partnership for Peace program in 1994, while remaining militarily nonaligned. Both countries join NATO exercises.

But even if Russia came to consider both countries effectively part of the Western alliance, defense cooperation and assurances are not guarantees — certainly not of the kind provided by NATO’s Article 5, which commits member states to collective defense.

“Basically we were paying the costs but without the benefits of Article 5, and we weren’t fooling Russia,” said Mr. Fagersten. “We were as aligned to NATO as any nonmember could be.”

But the coming decision has caused anguish among many Swedes, worried that membership in a nuclear alliance will limit Sweden’s ability to press for nuclear disarmament, arms control and peaceful resolution of disputes.

“This is not how you build peace and security,” said Gabriella Irsten of the Swedish Peace and Arbitration Society, which sharply condemns the Russian invasion but opposes NATO membership. “You create security together with your enemy — if your enemy is not secure, you are not.”

Nonalignment has served Sweden well “and kept us safe,” she said, so it seems wrong to dump it now.

“I also feel it would be a loss of our history,” she said. “We worked for so long with a view of how to build peace, and now that’s being thrown into the garbage without real discussion and with all this fear.”

Both the Greens and the Left Party oppose NATO membership for similar reasons.

Marta Stenevi of the Greens said that the Russian invasion meant “a re-evaluation of our positions on defense and security,” but called for better Swedish defense and closer cooperation with NATO rather than membership, “which comes with certain obligations,” like going to war in a crisis it does not choose.

And then there is the daunting possibility, she said, of a return to power of former President Trump.

“We want to actively participate in the crises we choose,” Ms. Stenevi said. “To keep a strong voice for peace and democracy is easier outside the alliance.”

With a ‘Special Group,’ the Mets Find Ways to Win
5 hours ago