With four new families recently arriving, the remote and rainy island in the Hebrides is experiencing its version of a population surge, although residents new and old concede living here isn’t easy.

ISLE OF RUM, Scotland — No doctors. No restaurants. No churches. And worst of all for some: no pubs.

Life on a remote island in the Scottish Hebrides is not for everyone.

But Alex Mumford, one of the approximately 40 people living on the Isle of Rum, says he loves it, although he admits getting a drink could be an adventure, with the nearest pub on the neighboring island of Skye.

“We thought about kayaking across and dropping in for a drink and then kayaking back,” Mr. Mumford said. “But it’s 10 miles over and 10 miles back, so it’s probably not ideal.”

Despite all the challenges of making a home here, the island has seen something of a recent population explosion, at least in percentage terms.

Just a couple of years ago, this isolated outpost had fewer than two dozen residents left, and only two students enrolled at its school. So islanders, heavily outnumbered by Rum’s deer, appealed for newcomers to apply to join them. 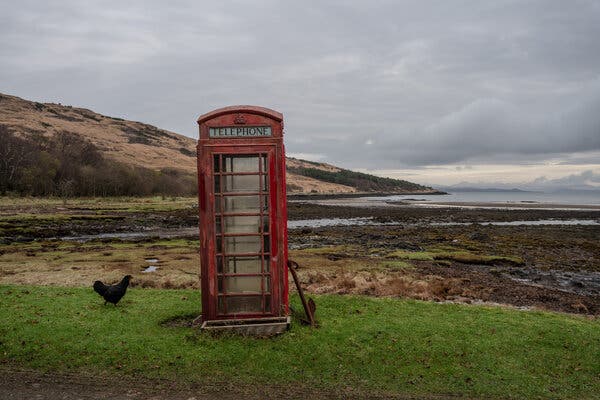 Despite all the challenges of making a home here, the island has seen something of a recent population explosion, at least in percentage terms.

The island’s only shop.
What the island lacks in restaurants and pubs (its lone cafe opens only in summer), it makes up for in natural beauty.

Several thousand emails arrived expressing interest. From around 400 applications judged to be serious, four couples were selected, most with young children.

Rum’s widely publicized search for new faces drew attention to what is a wider problem across Scotland’s more than 90 inhabited islands, many of which are experiencing similar existential crises.

“Over the last 10 years, almost twice as many islands have lost populations as have gained,” said a 2019 Scottish government document, which warned that projections suggest they were “at further risk of depopulation.”

That has been averted in Rum, at least for now.

Despite torrents of rain when they arrived in the winter of 2020, then a summer plagued by midges — persistent biting flies — the newcomers are still here, the families in four new, Nordic-style wooden homes rented at attractive prices.

Mr. Mumford, 32, who moved here with his partner from Bristol, a city with more than 460,000 people at the other end of Britain, works both as an administrator at the village school and as a visitor services manager at the Bunkhouse, a hostel for visitors.

People called their decision to move “crazy,” Mr. Mumford said. “I think that the people who are crazy are the people that live box to box with people in flats and cram on trains in rush hour. For me, it was an obvious, easy choice.”

He added: “I was just done with working full time for a large company.”

Most other new arrivals have kept jobs they already had, working remotely thanks to Rum’s broadband internet access, installed by a salmon farming company that employs one islander full time and brings in other workers periodically.

The island’s ferry terminal.
Alex Mumford, center, at the Rum Bunkhouse hostel, which he is renovating.
Newly built housing on the island.

What the island lacks in restaurants and pubs (its lone cafe opens only in summer), it makes up for in natural beauty. At sunrise, Rum is bathed in red light, while seals bob along the waterfront and herons swoop overhead.

Stags loll nonchalantly around the outskirts of Kinloch, the only settlement, while eagles inhabit the island’s volcanic peaks.

Yet if this is an alluring island, it’s also one with a difficult history. In the 19th century, the Gaelic-speaking population was evicted during the so-called Highland clearances when landlords created big sheep farms.

By the end of that century, Rum was the playground of George Bullough, an eccentric English tycoon who built a hunting lodge known as Kinloch Castle, complete with a menagerie that reportedly included a pair of small alligators. Strangers were discouraged from visiting, and rumors spread of louche parties behind the castle’s walls.

None of the island’s current residents have lived here more than three decades.

The remains of a house left derelict since the the so-called Highland clearances when landlords created big sheep farms.
Susie Murphy, one of two teachers taking turns to come to Rum from the mainland, on her way to the island’s school.
Red deer in front of Kinloch Castle, built in 1897.

Fliss Fraser, 50, is one of the longest-tenured residents, having arrived in 1999. She now runs the Ivy Lodge bed-and-breakfast.

She conceded the island’s appeal can be hard for some to appreciate.

“Some people come here and look around and say: ‘It’s misty, it’s muddy, it’s raining, there’s nothing to do, why would you be here?’” she said as she looked out onto a scenic shoreline from which she swims even in winter. Rum, she added, “either grabs people or it doesn’t.”

On the downside, the community, while very supportive, is so small that nothing stays secret for long.

It is best not to fall out with neighbors because they are impossible to avoid. And islanders need to be resourceful. When Ms. Fliss requested a technician from the mainland to fix the phone box outside her home, she was instead sent a replacement unit to install herself.

The arrival of new families has rejuvenated the school, boosting its roll from two to five, according to Susie Murphy, 42, one of two teachers taking turns to come from the mainland. “It’s been really challenging but really good fun,” she said.

The school, which was once a small church, teaches children up to age 11 or 12. Older students have to go to a high school on the mainland, returning to Rum at weekends, weather and the ferry permitting. The accommodation for visiting teachers is a well-equipped trailer home, or caravan.

“When the weather is wild the caravan shakes,” said Ms. Murphy, adding that sleeping could be difficult in September because “during rutting season the deer roar right through the night.”

The village hall. Just a couple of years ago, this isolated outpost had fewer than two dozen residents left.
Islanders go for an early morning swim by the bay in Kinloch.
The center of the village in Kinloch. With so few people, the social interactions that do occur can be intense, with a short trip to the village shop stretching into an hourslong outing with all the requisite stops to chat.

Kim Taylor, who runs the cafe in summer, also has a small venison business. Little has changed in that line of work for more than a century: The carcasses of animals culled to keep the deer population sustainable are brought from the hillside by wild ponies.

Rum has no real agriculture, something one of the arrivals, Stephen Atkinson, 40, hopes to change by keeping some pigs. He has yet to secure permission. The village is owned by a community trust and most of the rest of the island by NatureScot, Scotland’s nature agency, so decision-making can be slow.

Though he said winter nights can be depressing, Mr. Atkinson, who moved to Rum from northern England, isn’t deterred by the rain.

“We live in a world now where people associate sunny and hot weather with positivity and happiness and rainy and dark as negative,” he said. “But there is beauty in everything, and I quite enjoy cold, windy and stormy weather.”

With so few people, the social interactions that do occur can be intense, Mr. Atkinson noted, with a short trip to the village shop stretching into an hourslong outing with all the requisite stops to chat.

“We always say that in some ways it’s not remote enough,” joked Mr. Atkinson, who moved here with his partner and young son.

As the islanders ponder the economic future of their home, they see clear potential for new tourism work, perhaps as guides for walking tours or as local experts for the adventurous looking to swim and kayak in the rough water.

But how many visitors should be encouraged is contentious. Apart from the two rooms at Ms. Fraser’s bed-and-breakfast, Rum has some camping facilities and the Bunkhouse hostel, which Mr. Mumford is renovating.

As the islanders ponder the economic future of their home, they see clear potential for new tourism work.
Deer loll nonchalantly around the outskirts of Kinloch, the only settlement, while eagles inhabit the island’s volcanic peaks.
The beach at Kilmory; in the background is the Isle of Skye, which has the closest pub.

The big question is what to do with Kinloch Castle, which offered accommodation to visitors and tours of its grand rooms but closed during the pandemic.

NatureScot is considering proposals but restoring the deteriorating building could cost millions of pounds. And some worry more tourism could threaten the wildness of Rum’s landscape and the quietness of life that attracted the residents in the first place.

Its newcomers seem to have embraced Rum’s tranquillity and slower pace, though Mr. Mumford admits to occasional irritation that friends and family in England picture him living on a sort of Celtic treasure island, rather than navigating the challenges of a remote settlement.

As he sheltered from driving rain one recent day, waiting to discover if his car would return from a mainland garage on the ferry, Mr. Mumford made the mistake of calling his father and expecting a little sympathy.

“Are you enjoying paradise?” his dad inquired.

Tags
New People Rum She That

U.S. and Russia Will Discuss European Security, but Without Europeans

How Do You Say Kyiv? It Can Be Hard for English Speakers.

Featured Posts
How Do You Say Kyiv? It Can Be Hard for English Speakers.
4 mins ago

How Do You Say Kyiv? It Can Be Hard for English Speakers.

Can I Reveal a Colleague’s Covid Diagnosis?
52 mins ago

How to Get Through a Power Outage
1 hour ago