Good morning. It’s Thursday. Today we’ll look at a decision that many people who follow politics in New York did not expect: The state’s top court threw out the new map for congressional and State Senate districts. We’ll also look at opposition to the city’s plans for homeless shelters in Chinatown. 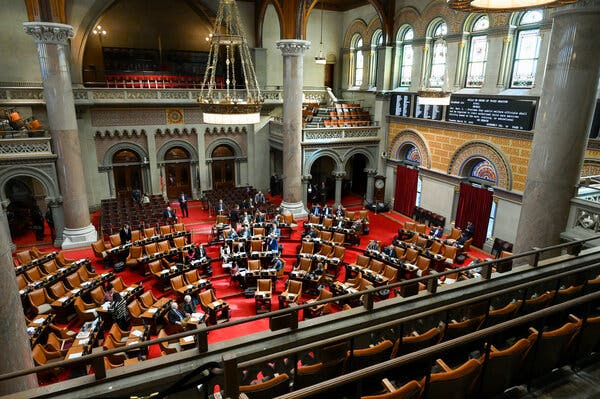 New York’s top court said Democrats had violated the State Constitution when they took it upon themselves to draw new congressional and State Senate districts, which were widely seen as likely to favor Democratic candidates. The judges ordered a court-appointed expert to prepare new maps.

The ruling is expected to delay the June 28 primaries for congressional and State Senate districts until August, to allow time for new maps to be readied and for candidates to collect petitions to qualify for the ballot in the districts on those maps.

But there could still be primaries in June for governor and the State Assembly because those districts were not at issue. The high court left it to a trial court judge and the state Board of Elections to figure out the details with “all due haste.”

My colleague Nicholas Fandos writes that Democratic leaders had counted on the Court of Appeals, with all seven judges appointed by Democratic governors, to overturn earlier decisions about the congressional and State Senate maps from a Republican judge in Steuben County and a bipartisan appeals court in Rochester. The high court instead issued a more damning verdict that is not subject to appeal.

National Democrats had looked to New York to pick up as many as three new seats in the fall and offset redistricting gains by Republicans across the country. Now, with the ruling likely to eliminate the prospect of Democratic gains in New York, Republicans’ chances of retaking control of the House of Representatives appear to have increased.

With Chief Judge Janet DiFiore writing the majority opinion, the court concluded that the Democrats — who control the Assembly and State Senate and adopted the maps at issue in February — had ignored a constitutional amendment approved by voters in 2014 that banned partisan gerrymandering. The judges said the Democrats had designed districts “with impermissible partisan purpose.”

Gov. Kathy Hochul, a Democrat, said she was reviewing the decision. Michael Murphy, a spokesman for Democrats in the State Senate, said they still “believe in the constitutionality” of their maps and will repeat that to the court-appointed expert assigned to draw ones.

Republicans and several nonpartisan public interest groups applauded the ruling. “The will of the people prevailed over the Corrupt Albany Machine in a tremendous victory for democracy, fair elections & the Constitution!” Representative Nicole Malliotakis, an endangered Republican, wrote on Twitter. Her Staten Island-based district was among several that the Democrats’ congressional map would have made significantly bluer by adding liberal voters from Park Slope in Brooklyn.

What to Know About Redistricting

Enjoy a sunny day in the high 50s with breezes that will continue into a mostly clear evening, when temps will drop to the 40s.

In effect until Monday (Eid al-Fitr).

The Chinatown neighborhood in Manhattan is about to get two new homeless shelters, one of which is proposing to allow drug use. Residents are fighting the city’s plans. I asked my colleague Andy Newman, who covers homelessness and related issues, to explain.

Hardly any neighborhood in the city welcomes homeless shelters. But anti-Asian hate crimes increased by over 300 percent from 2020 to 2021, and a lot of those attacks were linked to homeless people — and a lot of people in Chinatown feel that their very right to live is under attack. One man whose children go to school in Chinatown said at a community board hearing: “We do so much for this country and the city, and our human rights, my son and daughter’s human rights, are being taken away.”

You mentioned the community board, which has just voted to oppose one of the new shelters. Will that vote make a difference, or will it just add to the pressure on Mayor Eric Adams?

The optics are tricky for Adams. He has thrown his weight behind opening more shelters as part of his plan to convince people who live in the streets and subways to come indoors. He has also been a strong supporter of the “harm reduction” approach to the opioid crisis that this planned shelter embraces.

But he is also under pressure to stop hate crimes against Asian New Yorkers, and many residents of Chinatown believe that this shelter would lead to more such crimes — even though the shelter’s supporters, and city homeless services officials, argue that the shelter will actually make the neighborhood safer by taking in people who are already homeless in the neighborhood and connecting them to mental health and substance abuse services.

Jacky Wong, founder of Concerned Citizens of East Broadway, which opposes another Chinatown shelter, questions the city’s approach of opening shelters in areas with a lot of street homelessness. “People may come here just to buy drugs, and so they would be considered ‘from’ this neighborhood,” he told me. “Why not give them housing in a neighborhood where they have more positive connections?”

How has Chinatown coped with what residents say was a surge in random violence and thefts that accompanied the pandemic?

Every Chinese-speaking person we interviewed has either witnessed or been a victim of some kind of episode of violence, crime or disorder that they attributed to a homeless person. Senior citizens are taking self-defense courses. Doctors said they send their staff home early so that they don’t have to deal with the streets and subways after dark.

The city says the new shelters are partly a response to the killing of a homeless Asian man in 2019. But plans to name one of the shelters for him have drawn opposition. Why?

Many people in Chinatown feel that the city is exploiting the 2019 murder of Chuen Kwok, an 83-year-old man from Hong Kong who slept in the street in Chinatown, as a justification for forcing a shelter on a community that doesn’t want it. These planned shelters are intended for people who are street-homeless, and there is a widely held belief in Chinatown that street homelessness is primarily a problem of the non-Chinese population, notwithstanding Kwok.

What is redistricting? It’s the redrawing of the boundaries of congressional and state legislative districts. It happens every 10 years, after the census, to reflect changes in population.

Why is it important this year? With an extremely slim Democratic margin in the House of Representatives, simply redrawing maps in a few key states could determine control of Congress in 2022.

How does it work? The census dictates how many seats in Congress each state will get. Mapmakers then work to ensure that a state’s districts all have roughly the same number of residents, to ensure equal representation in the House.

Who draws the new maps? Each state has its own process. Eleven states leave the mapmaking to an outside panel. But most — 39 states — have state lawmakers draw the new maps for Congress.

If state legislators can draw their own districts, won’t they be biased? Yes. Partisan mapmakers often move district lines — subtly or egregiously — to cluster voters in a way that advances a political goal. This is called gerrymandering.

What is gerrymandering? It refers to the intentional distortion of district maps to give one party an advantage. While all districts must have roughly the same population, mapmakers can make subjective decisions to create a partisan tilt.

Is gerrymandering legal? Yes and no. In 2019, the Supreme Court ruled that the federal courts have no role to play in blocking partisan gerrymanders. However, the court left intact parts of the Voting Rights Act that prohibit racial or ethnic gerrymandering.

Want to know more about redistricting and gerrymandering? Times reporters answer your most pressing questions here.

As courtesy meetings go, it was disastrous. Afterward, I staggered through the streets feeling as though everything was going against me.

After giving me many hints over the years, I thought, the city was clearly telling me once and for all to get out. Maybe it was finally time to listen.

At some point, I wandered over to the West Fourth Street basketball courts. As I was watching the game, a well-dressed man with a satchel approached me.

“People take you for granted,” he said unsolicited. “You give and you give, and you don’t get anything in return. But you’re a good person and … ”

I don’t remember exactly the rest of what he said because I was trying very hard not to burst into tears.

He pulled out a pad and asked me to think of — but not tell him — the answers to a number of questions: my favorite number, my wife’s name, her age, my favorite color, the first name of my nemesis.

He then produced a neat list of all of my answers. I’m no rube when it comes to magic tricks, but this guy was a certifiable warlock.

He reassured me that my life would be all right and that I would get my dream job later that month. Then he wrote down three numbers: suggested donations.

I told him I didn’t have that kind of cash.

Tags
Homeless Map State That Will

He Made Yiddish Go Viral

Featured Posts
More than 1 in 5 adult Covid survivors in the U.S. may develop long Covid, a C.D.C. study suggests.
2 hours ago

Inside the Chelsea Sale: Deep Pockets, Private Promises and Side Deals
3 hours ago

The commodities giant Glencore will pay $1.1 billion to settle bribery and price-fixing charges.
3 hours ago