Hundreds of Palestinian mourners gathered in Gaza on Friday, a day after a fast-spreading fire killed 21 people at what had started as a family celebration.

Investigators were trying to determine what caused the fire and why it lasted more than hour. Officials said it quickly spread in part because gasoline stored in the apartment helped fuel the blaze.

The Abu Raya family had gathered Thursday night to celebrate both a birthday and a graduation in the third-floor apartment of a retired physiotherapist, Dr. Faraj Abu Raya. The festive family gathering turned deadly when the fire broke out and engulfed the apartment, killing all 21 people at the party.

Dr. Abu Raya’s son, Maher Faraj Abu Raya, had returned to Gaza from Egypt just hours before the party, which was a celebration of his recent graduation. The two were among the victims of the blaze.

The fire, in the northern Gaza neighborhood of Jabaliya, was one of the deadliest disasters in Gaza, in recent memory, not connected to the violence from the Israeli-Palestinian conflict.

“The investigation into this incident will be all encompassing,” said Iyad Bazim, a spokesman for the Interior Ministry. He said the inquiry would focus on “the cause of the fire and the way it was dealt with.”

Videos from the scene showed firefighters battling the fire, which engulfed the entire top floor of the building. They managed to prevent the flames from spreading to nearby buildings.

The fire was extinguished within 25 minutes, said Mahmoud Basal, a spokesman for the Palestinian Civil Defense. But some residents of the neighborhood questioned why it took so long for firefighters to arrive at the scene. 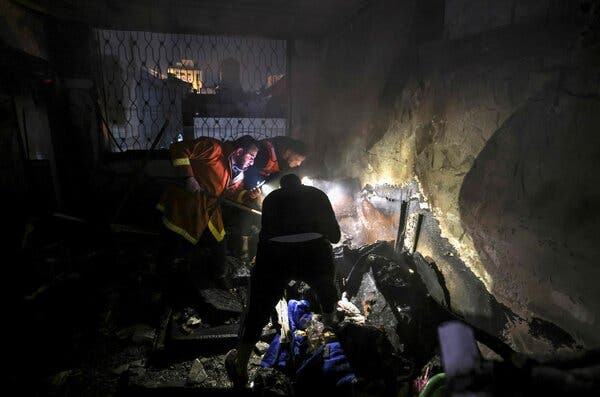 Firefighters extinguishing flames in the apartment that was ravaged by fire on Thursday. Credit…Mahmud Hams/Agence France-Presse — Getty Images

Husam Ali, 30, a neighbor, said he and other residents spent nearly an hour trying to break down the front door of the building and the apartment door before firefighters arrived.

Ehab Abu al-Fahem, 30, an electrician who has done work for the family in the apartment, saw small flames from the windows around 5:50 p.m.

About 10 minutes later a small fire truck, a police vehicle and an ambulance arrived at the scene, he said. The fire truck was equipped with a hose and a small amount of water but no ladder.

When firefighters began to spray the water, it didn’t reach the third floor where the flames had grown by then, and ran out after five minutes, Mr. al-Fahem said. He said he called the civil defense and urged them to send more help. About 10 minutes later, another small fire truck arrived, also without a ladder to enable firefighters to reach the third floor, he said.

These two trucks also didn’t have oxygen tanks or masks, he said, adding that a truck with a ladder didn’t arrive until about an hour later.

“The way they were fighting the fire was wrong,” he said.

At a news conference in front of the building hours after the fire had been extinguished, a civil defense official said emergency workers had arrived on the scene within four or five minutes of getting the call about the blaze.

“That’s not true!” yelled two young men in the crowd.

They were met with silence from the officials.

On Friday, the civil defense and interior ministry defended their response times and said they didn’t know if there was a delay in residents summoning emergency responders.

“We were in front of an enormous fire in a crowded neighborhood and it could have become a much bigger blaze,” said Mr. Bazim, the Interior Ministry spokesman. “We could have faced a bigger crisis if not for the response and efforts to isolate the fire.”

A cache of gasoline stored inside the apartment where the victims had been celebrating helped fuel the blaze’s quick spread, said Mr. Basal, the civil defense spokesman.

The fire was contained to the third-floor apartment. There were no injuries on other floors.

Witnesses described harrowing scenes of seeing those trapped inside the apartment pressed up against the metal bars of windows, unable to escape and yelling for help. One woman and two children were seen at one window gripping the bars before they were engulfed by flames.

Officials from Hamas, the militant group that runs Gaza, pinned the blame for the deaths on Israel’s 15-year blockade imposed on the coastal enclave, which has banned the import of certain equipment and machinery, hobbling the capability of emergency responders.

Gaza’s civil defense has only old equipment and vehicles and is in desperate need of fire trucks, ambulances, rescue tools and ladders, Mr. Bazim said.

“In general Israel prevents any equipment for the civil defense and this of course impacts our abilities to respond to big crises,” he said.

Israel’s civil administration, which controls the civilian aspects of Israel’s presence in the occupied territories, including Gaza and the West Bank, said Hamas’ accusation was an effort to evade responsibility.

Rather than establishing civil and medical infrastructure in Gaza, Hamas “has invested its resources in strengthening itself militarily in order to manufacture rockets and missiles which it launches at innocent Israeli civilian populations,” the administration said in a statement.

The blockade, which is kept up by both Israel and Egypt, has severely damaged Gaza’s infrastructure, health care system and industries by preventing or limiting the importation of “dual-use” items — products that Israel says can be used for both civilian and military purposes. Those items include medical equipment, construction material and even gear used for the coastal enclave’s fishing industry.