China is collecting a staggering amount of personal data from everyday citizens at a previously-unknown scale, a Times investigation has found. Phone-tracking devices are now everywhere. The police are creating some of the largest DNA databases in the world. And the authorities are building upon facial recognition technology to collect voice prints from the general public.

The Times’s Visual Investigations team and reporters in Asia spent over a year analyzing more than a hundred thousand government bidding documents. They call for companies to bid on the contracts to provide surveillance technology, and include product requirements and budget size, and sometimes describe at length the strategic thinking behind the purchases. Chinese laws stipulate that agencies must keep records of bids and make them public, but in reality the documents are scattered across hard-to-search web pages that are often taken down quickly without notice. ChinaFile, a digital magazine published by the Asia Society, collected the bids and shared them exclusively with The Times.

This unprecedented access allowed The Times to study China’s surveillance capabilities. The Chinese government’s goal is clear: designing a system to maximize what the state can find out about a person’s identity, activities and social connections, which could ultimately help the government maintain its authoritarian rule.

Here are the investigation’s major revelations.

Analysts estimate that more than half of the world’s nearly one billion surveillance cameras are in China, but it had been difficult to gauge how they were being used, what they captured and how much data they generated. The Times analysis found that the police strategically chose locations to maximize the amount of data their facial recognition cameras could collect. 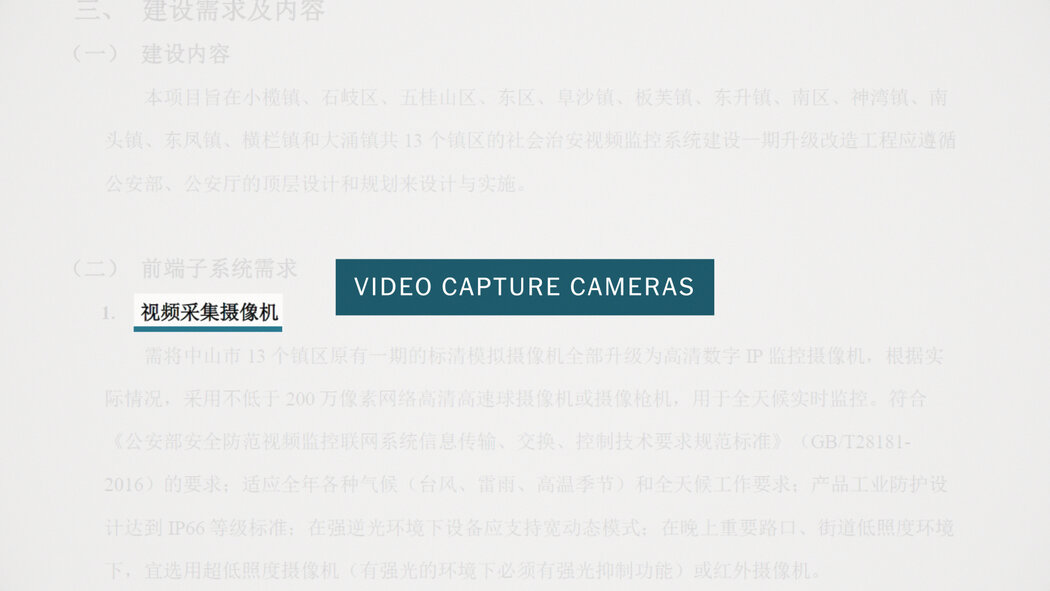 In a number of the bidding documents, the police said that they wanted to place cameras where people go to fulfill their common needs — like eating, traveling, shopping and entertainment. The police also wanted to install facial recognition cameras inside private spaces, like residential buildings, karaoke lounges and hotels. In one instance, the investigation found that the police in the city of Fuzhou in the southeast province of Fujian wanted to install a camera inside the lobby of a franchise location of the American hotel brand Days Inn. The hotel’s front desk manager told The Times that the camera did not have facial recognition capabilities and was not feeding videos into the police network.

A document shows that the police in Fuzhou also demanded access to cameras inside a Sheraton hotel. In an email to The Times, Tricia Primrose, a spokeswoman for the hotel’s parent company, Marriott International, said that in 2019 the local government requested surveillance footage, and that the company adheres to local regulations, including those that govern cooperation with law enforcement.

These cameras also feed data to powerful analytical software that can tell someone’s race, gender and whether they are wearing glasses or masks. All of this data is aggregated and stored on government servers. One bidding document from Fujian Province gives an idea of the sheer size: The police estimated that there were 2.5 billion facial images stored at any given time. In the police’s own words, the strategy to upgrade their video surveillance system was to achieve the ultimate goal of “controlling and managing people.”

Devices known as WiFi sniffers and IMSI catchers can glean information from phones in their vicinity, which allow the police to track a target’s movements. It’s a powerful tool to connect one’s digital footprint, real-life identity and physical whereabouts.

The phone trackers can sometimes take advantage of weak security practices to extract private information. In a 2017 bidding document from Beijing, the police wrote that they wanted the trackers to collect phone owners’ usernames on popular Chinese social media apps. In one case, the bidding documents revealed that the police from a county in Guangdong bought phone trackers with the hope of detecting a Uyghur-to-Chinese dictionary app on phones. This information would indicate that the phone most likely belonged to someone who is a part of the heavily surveilled and oppressed Uyghur ethnic minority. The Times found a dramatic expansion of this technology by Chinese authorities over the past seven years. As of today, all 31 of mainland China’s provinces and regions use phone trackers.

DNA, iris scan samples and voice prints are being collected indiscriminately from people with no connection to crime.

The police in China are starting to collect voice prints using sound recorders attached to their facial recognition cameras. In the southeast city of Zhongshan, the police wrote in a bidding document that they wanted devices that could record audio from at least a 300-foot radius around cameras. Software would then analyze the voice prints and add them to a database. Police boasted that when combined with facial analysis, they could help pinpoint suspects faster.

In the name of tracking criminals — which are often loosely defined by Chinese authorities and can include political dissidents — the Chinese police are purchasing equipment to build large-scale iris-scan and DNA databases.

The first regionwide iris database — which has the capacity to hold iris samples of up to 30 million people — was built around 2017 in Xinjiang, home to the Uyghur ethnic minority. Online news reports show that the same contractor later won other government contracts to build large databases across the country. The company did not respond to The Times’s request for comment.

The Chinese police are also widely collecting DNA samples from men. Because the Y chromosome is passed down with few mutations, when the police have the y-DNA profile of one man, they also have that of a few generations along the paternal lines in his family. Experts said that while many other countries use this trait to aid criminal investigations, China’s approach stands out with its singular focus on collecting as many samples as possible.

We traced the earliest effort to build large male DNA databases to Henan Province in 2014. By 2022, bidding documents analyzed by The Times showed that at least 25 out of 31 provinces and regions had built such databases.

The government wants to connect all of these data points to build comprehensive profiles for citizens — which are accessible throughout the government.

The Chinese authorities are realistic about their technological limitations. According to one bidding document, the Ministry of Public Security, China’s top police agency, believed the country’s video surveillance systems still lacked analytical capabilities. One of the biggest problems they identified was that the data had not been centralized.

The bidding documents reveal that the government actively seeks products and services to improve consolidation. The Times obtained an internal product presentation from Megvii, one of the largest surveillance contractors in China. The presentation shows software that takes various pieces of data collected about a person and displays their movements, clothing, vehicles, mobile device information and social connections.

In a statement to The Times, Megvii said it was concerned about making communities safer and “not about monitoring any particular group or individual.” But the Times investigation found that this product was already being used by Chinese police. It creates the type of personal dossier authorities could generate for anyone, that could be made accessible to officials across the country.

China’s Ministry of Public Security did not respond to faxed requests for comment sent to its headquarters in Beijing, nor did five local police departments or a local government office named in the investigation.

Hear the stories of Ukrainians who were forcibly resettled to Russia and escaped.

Why do Finland and Sweden appear headed toward swift NATO membership while Ukraine isn’t?

NATO formally invites Finland and Sweden to join the alliance.

Pay Down Your Credit Card Balances, and Other Tips for a Slowing Economy
4 hours ago

A Blow to Regulators
5 hours ago

Who Will Help Care for Texas’ Post-Roe Babies?
7 hours ago

Is Baltimore Big Enough for the Two of Them?
8 hours ago