For months, an unknown green liquid seeped through the cracks of the kitchen ceiling in Francis Roberts’s basement apartment. Music — sometimes exceeding 100 decibels, about as loud as a jackhammer — still blasts from an apartment upstairs at all hours of the day.

Mr. Roberts, 77, who has lived in the Crown Heights building for more than 20 years, is certain that the noise and strange green substance are coming from the apartment of his new neighbor. Soon after the new neighbor moved in, squatters began camping in makeshift tents that were pitched near the entrance of his apartment. Chickens roamed the front yard, and trash and drug paraphernalia littered the narrow path to his door. Until last week, two portable toilets, clogged from frequent use, were placed in front of Mr. Roberts’s bedroom windows.

“It has been hell,” said Mr. Roberts, on a recent morning in his frigid apartment, where he said the heat had not worked until recently since the building changed hands in April. Mr. Roberts said the landlord has done little to stop the squatters and the noise or to make much-needed repairs. And he thinks he knows why: his rare $450-a-month, rent-stabilized apartment.

Francis Roberts, who has lived in the same Crown Heights building for more than 20 years, says his landlord and an upstairs neighbor are trying to push him out of his rent-stabilized apartment.Credit…Sarah Blesener for The New York Times
An unidentified green liquid has been seeping from cracks in Mr. Roberts’s kitchen ceiling. He believes the upstairs tenant is to blame.Credit…Sarah Blesener for The New York Times

Crown Heights is one of the fastest gentrifying neighborhoods in the city. The median asking rent in the neighborhood was $3,000 a month in October, according to the listing website StreetEasy.

The landlord has made recent overtures — to move him to a new rent-regulated apartment, rent free, while repairs are made. But Mr. Roberts, who is retired from a clerical job at a Manhattan law firm, refused. He is convinced it’s a scheme to convert his apartment to a market-rate rent, which would price him out of ever returning.

According to a lawsuit filed this month by Brooklyn Legal Services’ Tenant Rights Coalition on behalf of Mr. Roberts, the landlord has gone to great lengths to push him out and is working with Aaron Akaberi, his new neighbor, to do so. Mr. Akaberi, 36, has invited drug use and squatting at the property, according to the lawsuit and neighbors’ affidavits.

“They took the harassment to another level,” said Liam McSweeney, a member of Brooklyn Legal Services who is working on the case. The suit was first reported by Brownstoner.

Reached by phone, Mr. Akaberi said that he is “absolutely not” harassing Mr. Roberts, and denied working with the landlord to drive him out. He did not respond to questions that he requested to be sent via email.

Yehuda Gruenberg, the head officer of the company that owns the property, said in a statement through his lawyer that there is no harassment taking place at the property. The lawyer, Julius Toonkel, said his client believes that the abuse described by Mr. Roberts is likely a “dispute between tenants,” and that the landlord has “no control of third parties and other tenant/s on the premises.”

The events have galvanized Mr. Roberts’s block. On Nov. 20, dozens of neighbors and members of the Crown Heights CARE Collective, a community group, stood with Mr. Roberts outside his home in the cold to yell “shame” at the landlord, and to make calls to “stand up, fight back.”

One neighbor, Brian Villaroel, said in a court statement that Mr. Akaberi has threatened residents who have tried to remove the tent encampment. He said one of Mr. Akaberi’s associates told him that he was there to harass Mr. Roberts, and called him a racial epithet. Neighbors photographed what appeared to be a noose hanging from a tree outside the building.

Another neighbor, Maria Florez, who lives next to the building, said in a statement that Mr. Akaberi blasts music “24/7,” and it feels like a “torture method” directed at Mr. Roberts.

More than a decade ago, the building felt much different, said Curen Sutherland-Goddard, who once lived there.

But Ms. Sutherland-Goddard and many other tenants, including her daughter, Amanda Sutherland, who is Mr. Roberts’s niece, left as the building changed hands and fell into disrepair.

After years of building degradation, and being forced to share a single bathroom with tenants two floors above her unit, because their bathroom was vandalized, the Sutherland-Goddards agreed to a $150,000 buyout from a previous landlord, which Amanda Sutherland said she now regrets. The family gave up their $380-a-month unit and moved to a $2,000 apartment in East New York, with far fewer transit options and pest problems. 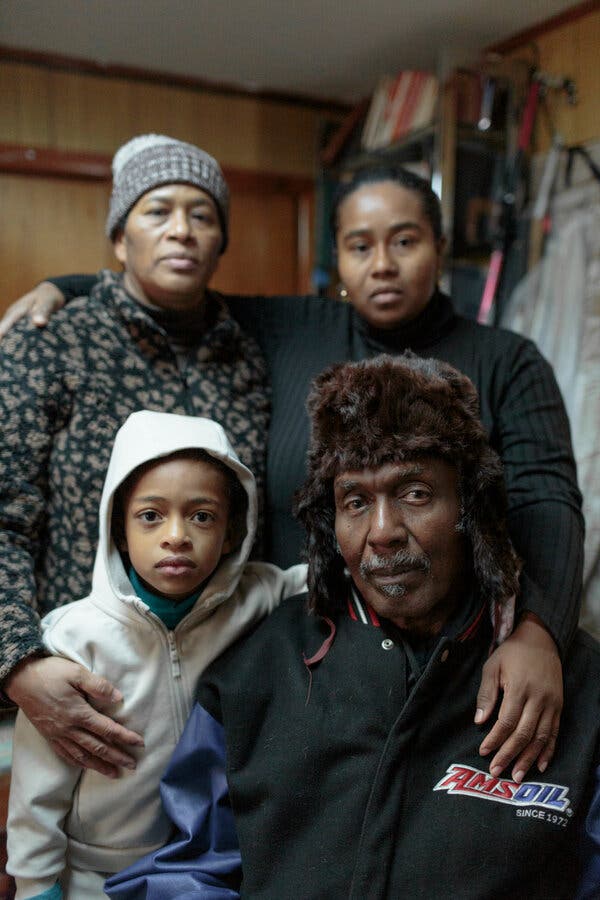 Other longtime tenants have also taken buyouts or left because of poor conditions, Mr. Roberts said.

But Mr. Roberts has made the decision again and again to fight.

He has served as the building’s superintendent, and has come to love the neighborhood’s nearby parks, plentiful transit options and biking paths. (He is an avid cyclist.) “I just want to make my apartment habitable and to live in peace,” he said. “That’s all I want.”

He made similar complaints about heating, gas and electrical issues to the previous landlord, but the property was sold before most of the problems were fixed. The circa 1903 building includes his one-bedroom apartment and nine single-room-occupancy units on the upper floors, most of which are now occupied by students on short-term stays.

With the help of Brooklyn Legal Services, he is now suing a company called 972 Park Place L.L.C., which bought the four-story brownstone for $1.3 million, a discounted price after years of neglect by the previous landlords and a brief period of court-ordered management under a city program for buildings in dire condition.

He is suing the corporation, its agents and the city’s Department of Housing Preservation and Development to correct 240 open violations, more than a quarter of which are considered immediately hazardous: mold, lead paint chips, a lack of heat and cooking gas, sewage backup, and broken doors that have allowed dozens of vagrants to enter the cellar and common areas. He is also seeking civil penalties against the landlord.

The lights in the hallway leading to Mr. Roberts’s apartment do not work. Mr. Roberts said squatters have frequently gained access to the building.Credit…Sarah Blesener for The New York Times
Debris was scattered on a recent morning, with trash, shoes and cigarettes littering the ground.Credit…Sarah Blesener for The New York Times

There have been 11 complaints filed with the police since the new owner bought the property in April, including claims of burglary, assault and harassment, according to a police department spokesperson.

In September, Mr. Roberts said he woke up from a nap to find a stranger sitting at his computer desk, before the man fled. The next day, Mr. Akaberi lit a barbecue grill in the entryway that billowed smoke into the basement apartment.

Menachem Bukchin, the managing agent of the property, blamed Mr. Akaberi for the disorder, and said that complaints from neighbors are “beyond my control.”

A spokesman for the Department of Housing Preservation and Development said the agency has “initiated legal action against the owner” and repair staff is trying to address the most serious problems. The agency issued a vacate order for the cellar beneath Mr. Roberts apartment last week.

But on Nov. 20, the hallway leading to Mr. Roberts’s apartment was pitch-black, because the electrical wiring was faulty, with cables dangling from a hole in the ceiling. Shoes, cigarettes and a J.D. Salinger paperback were strewn on the floor, near a gaping hole where a plumbing issue was only partly remediated.

The apartment had not had working heat for months. Mr. Roberts was using a space heater and wearing multiple layers to bed as late as last week.Credit…Sarah Blesener for The New York Times
Ms. Sutherland-Goddard lived in the building for years before deteriorating conditions convinced her to take a buy out from a previous landlord.Credit…Sarah Blesener for The New York Times

Last week, a man was seen attempting to jump from a rooftop outside Mr. Akaberi’s window onto a neighboring property’s balcony, according to neighbors and a police report. He retreated into Mr. Akaberi’s apartment.

On Monday night, an incoherent man accosted Mr. Roberts in the hallway outside his apartment, despite the installation of new security doors.

The landlord’s latest offer still stands to move Mr. Roberts into a rent-regulated apartment in the neighborhood to better conduct repairs in his unit, according to Mr. Toonkel, the lawyer.

Tags
New York Out Said That Was

Italian Mobster, 16 Years on the Lam, Is Found Working at a Pizzeria
39 mins ago

January Job Growth Is a Boost for Biden
51 mins ago