In early October, about a month into Iran’s anti-government protests, a Tehran resident reported seeing at least three protesters being shoved into an ambulance during a student-led demonstration. But the resident said the protesters did not appear to be injured.

Around the same time, Niki, a university student in Tehran, said she saw security forces using ambulances to detain protesters at an intersection.

“They grabbed people,” she said. “They put them in the ambulance, turned off the lights. There were lots of people in the back.”The ambulance then drove down the street, she said. “I didn’t see where they dropped off the people, but I saw that there were normal people inside, like young girls.”

Protests calling for widespread social and political change that erupted in September have led to a brutal crackdown by Iran’s security forces, with more than 14,000 people arrested, according to the United Nations. At least 326 people have been killed, according to Iran Human Rights, a Norway-based NGO. The demonstrations began following the death of Mahsa Amini, known by her first Kurdish surname Jina, in the custody of Iran’s morality police and have been primarily led by women.

Part of that crackdown, according to witnesses and dozens of videos and images reviewed by The New York Times, has involved the use of ambulances by the security forces to infiltrate protests and detain protesters. Nearly all of the witnesses interviewed by The Times spoke on the condition of anonymity for fear of retribution from the government.

Such use of ambulances, which experts say violates international norms of medical impartiality, shows the lengths to which the government has gone to try to quell the nationwide demonstrations.

“People are going to be afraid to seek health care, meaning more people will die,” said Rohini Haar,an assistant adjunct professor at the School of Public Health at U.C. Berkeley. “Health care has credibility because of the idea of impartiality. It’s the basic idea of ‘do no harm’ and misusing ambulances clearly violates that.”

In an interview over an encrypted messaging app, a 37-year-old restaurant worker described seeing ambulances entering university campuses during protests almost every day, and uniformed security forces emerging from them. He works near three major universities in Tehran where he sees daily protests. He also attended other protests and said he saw security forces using ambulances there too.

Witnesses who attended protests in Tehran spoke about seeing plainclothes police officers, known as Basiji, forcing students into the back of an ambulance at a demonstration at Sharif University on Oct. 2.

One of the witnesses, in an interview over an encrypted messaging app, reported seeing Basiji beating one of the students, who was on the ground and covered in bruises, with a baton before shoving him into an ambulance along with another protester and driving away.

More on the Protests in Iran

Cities across Iran have been embroiled in demonstrations prompted by the death of a young woman, Mahsa Amini, while she was in police custody.

In the early days of the protests, protesters were on the streets in Rasht, the capital city of Gilan Province in northern Iran.

One video, whose location was mentioned by a Twitter user and independently verified by The Times, which seems to have been filmed from inside a car, shows an ambulance on fire, apparently after being targeted by protesters. Someone in the car shouts, “They’re rescuing the girls! Come out!” as the car nears the ambulance.

The video shows a man wearing what resembles the uniform of Iran’s national police force leaving the ambulance and running away from the vehicle. He is briefly chased by a group of people before escaping. 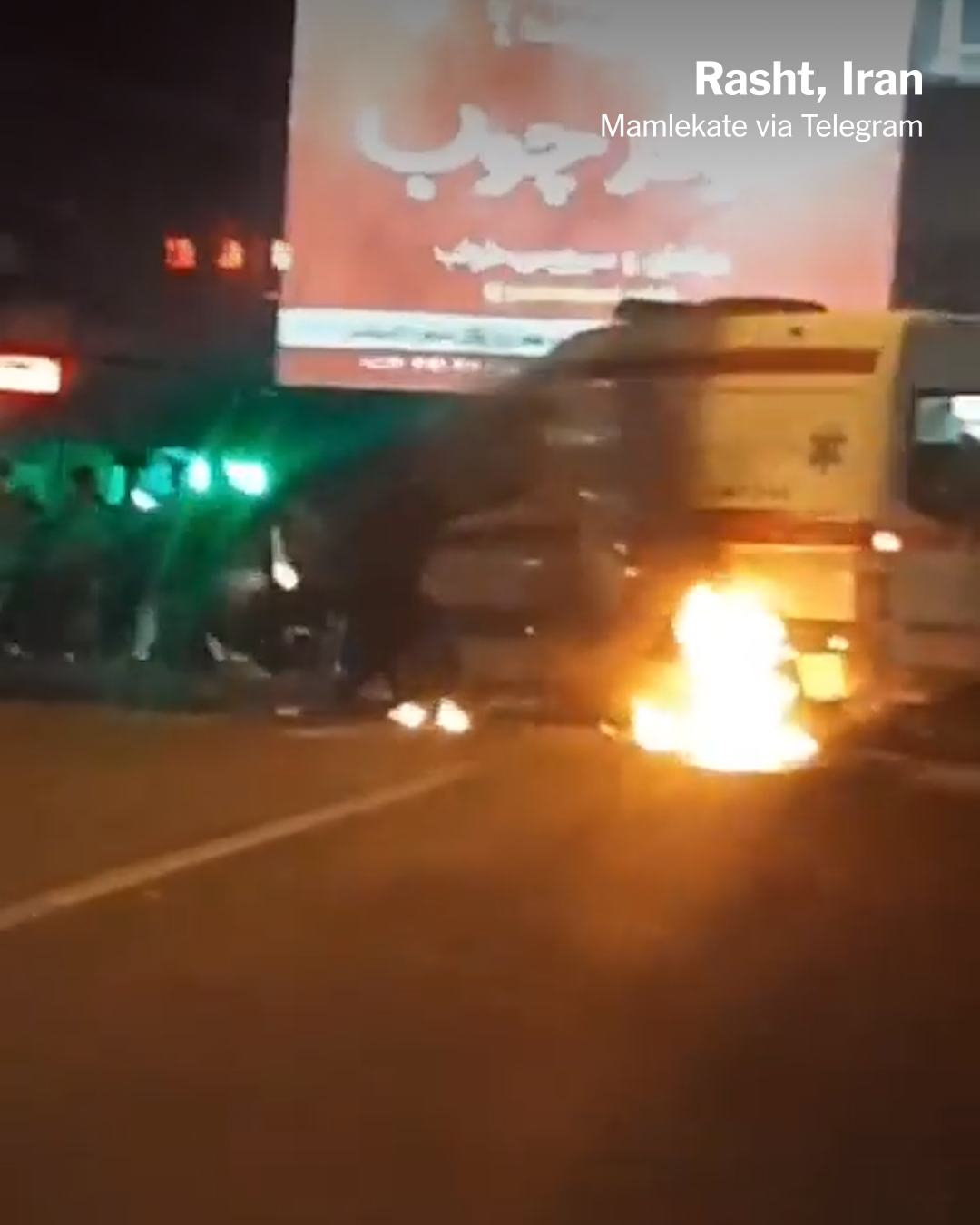 A man wearing what resembles the uniform of Iran’s national police force runs out of a burning ambulance in Rasht, Iran.

The Times showed the video to Afshon Ostovar, an associate professor at the Naval Postgraduate School in Monterey, Calif., who focuses on Iranian national security.

“That definitely looks like a NAJA officer,” Mr. Ostovar said in an interview, using the acronym for Iran’s national police force. “He’s not a paramedic. The uniform and firearm are dead giveaways.” The firearm that Mr. Ostovar refers to could be in the holster clipped to the man’s back as he runs away from the ambulance in the video.

Though the video doesn’t show who torched the ambulance, another video from a different angle shows the same ambulance being shoved and jostled by a crowd of people. 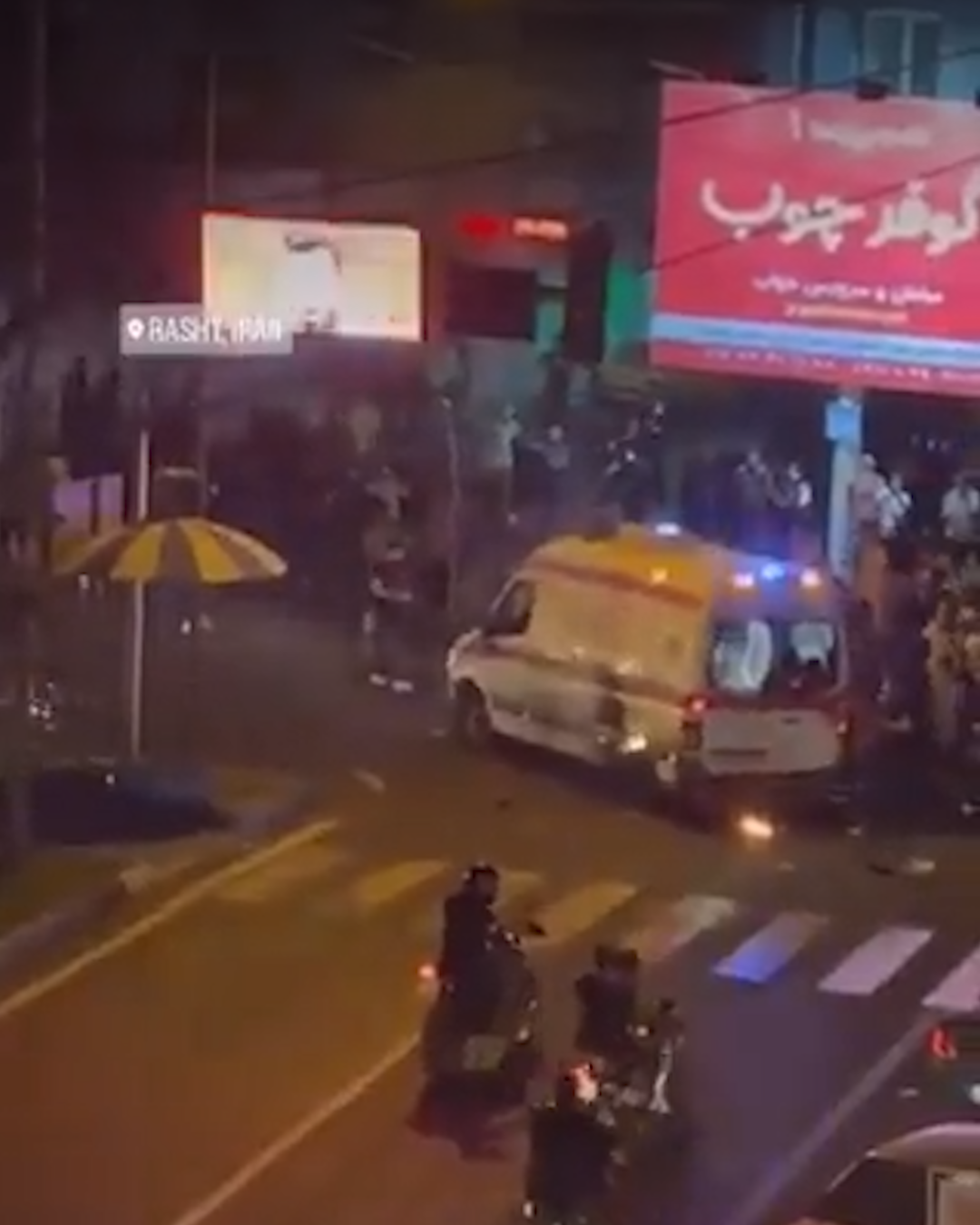 A crowd surrounds an ambulance in Rasht.

The Times analyzed and geolocated videos and photos showing ambulances entering or exiting police stations, or positioned just outside them, in at least six locations across the country (in one case the location was first mentioned by a Twitter user). 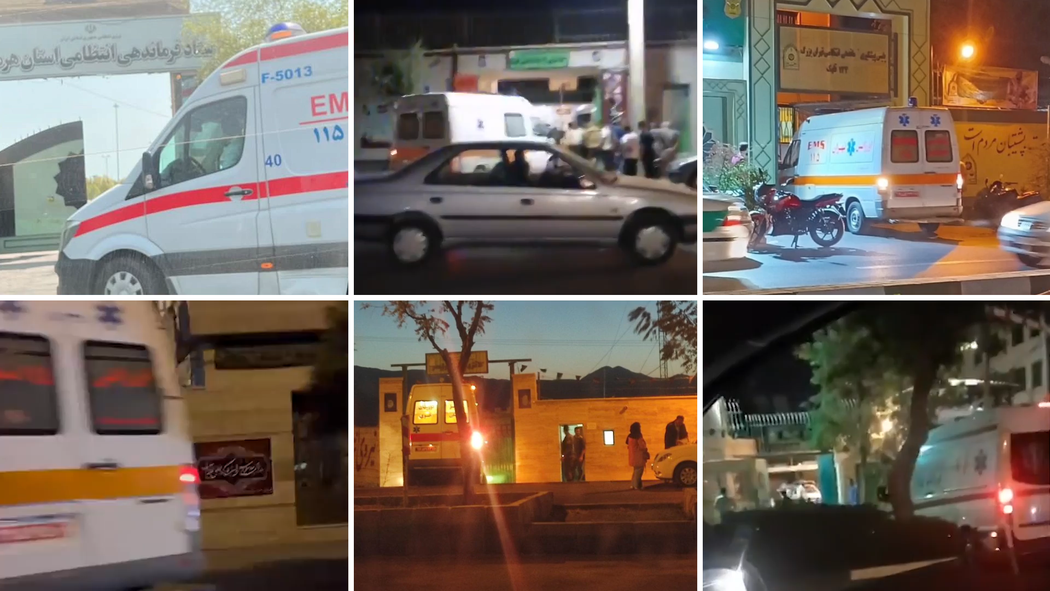 In two of the locations there are hospitals nearby according to Google Maps, but the video from one of these locations shows the ambulance clearly going into the police station. 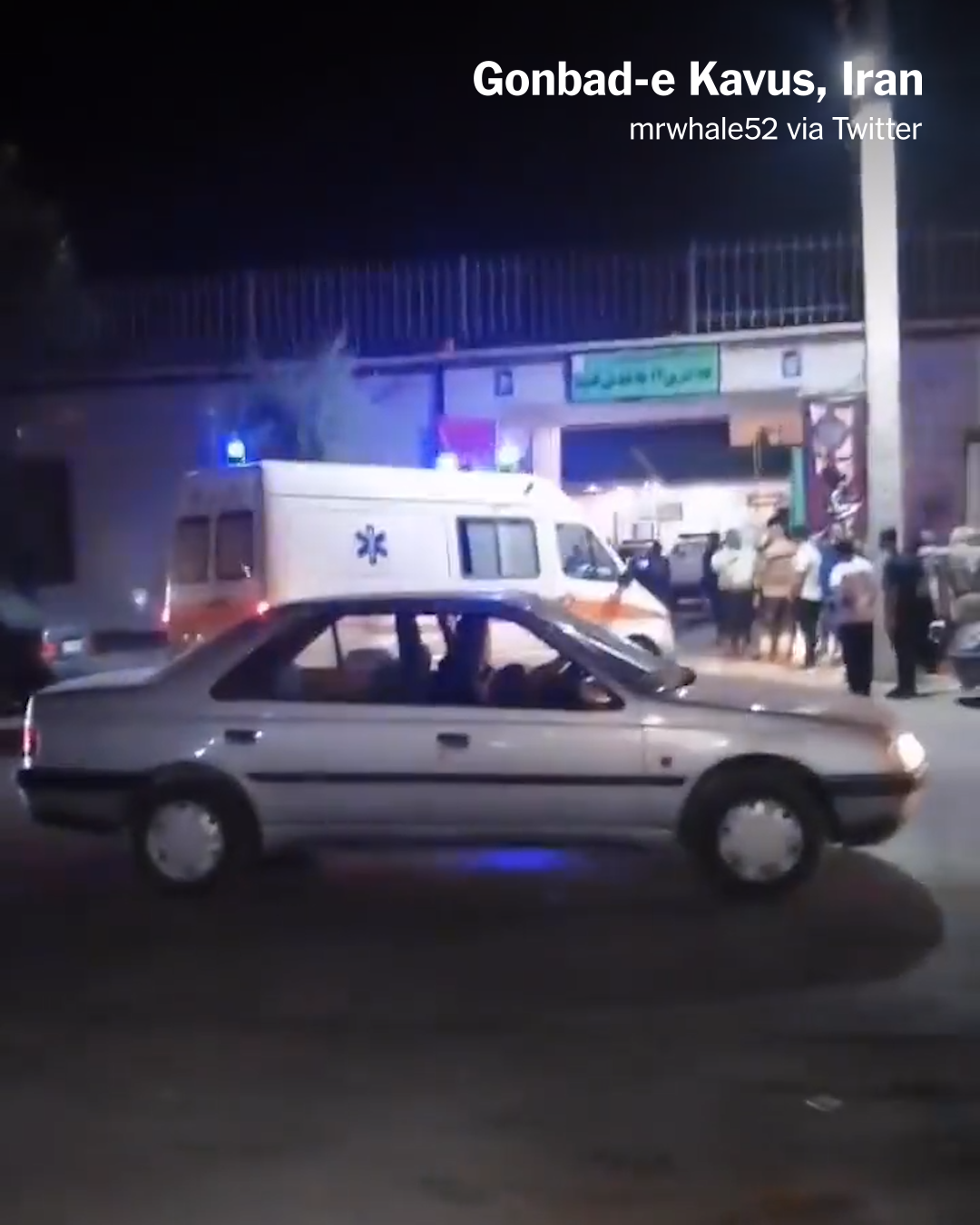 An ambulance drives into a police station in Gonbad-e Kavus.

Though the videos and photos don’t show who is being transported, a former emergency room physician said there’s no legitimate medical reason for ambulances to be at police stations.

“I can say with nearly 100 percent accuracy that this never happens,” said Dr. Amir Alishahi Tabriz who previously worked in the Loghman-e Hakim and Torfeh hospitals in Tehran in 2013. Now based in the United States, he works with doctors in Iran to help their patients get care after being injured in protest.

“People don’t feel safe to go to urgent care or hospitals. They know that forces are waiting for them to capture them,” he said. “When patients need help, we send them to health centers in the middle of the night.” 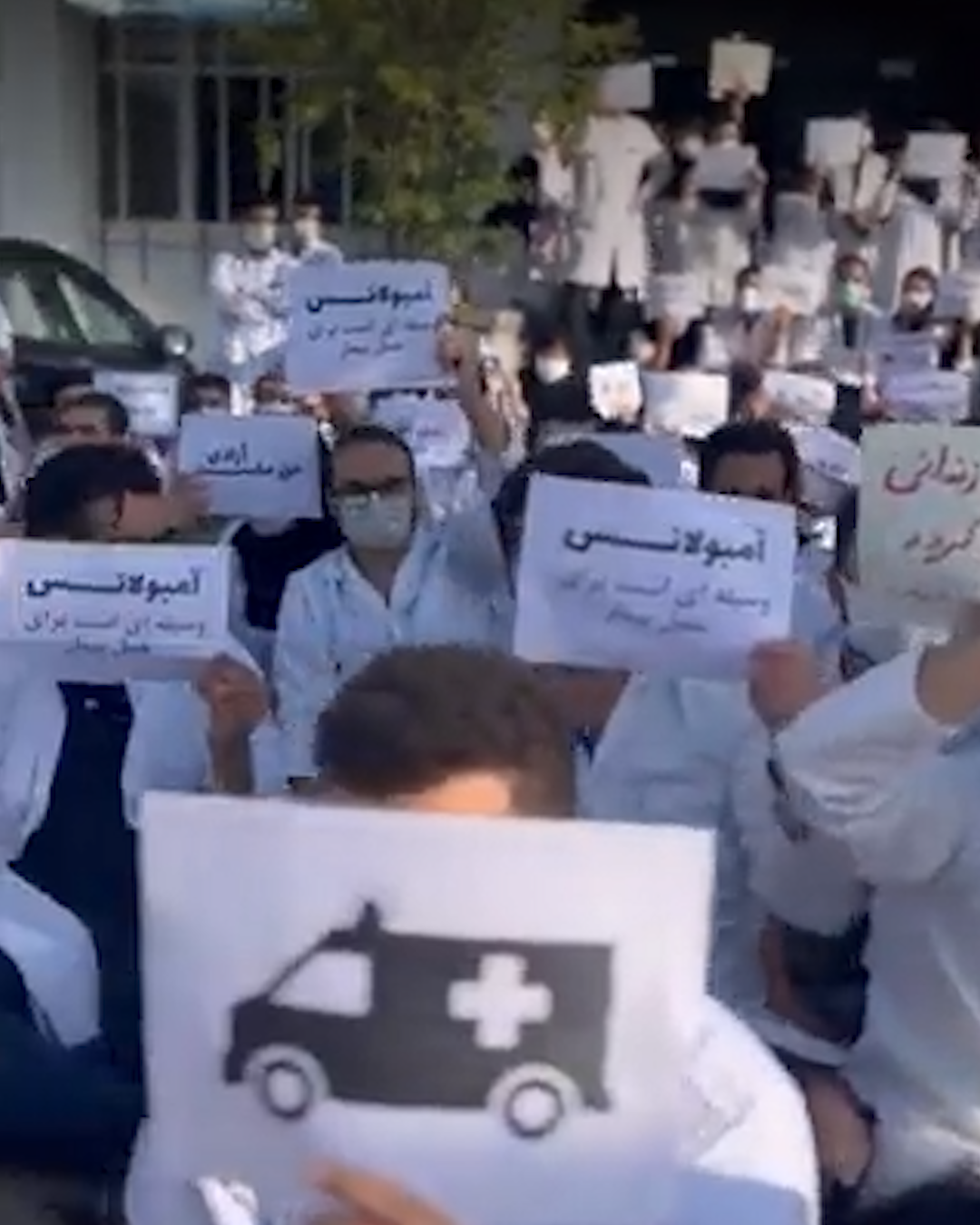 The use of ambulances to detain people has sparked outrage in Iran’s medical community.

The use of ambulances to detain people has outraged Iran’s medical community. A video posted on Twitter on Oct. 4 and verified by The Times shows medical workers demonstrating outside Razi University Hospital in Rasht, holding signs that read, “Basiji are not students,” and “Ambulances should be used for transporting patients.”

Another video posted on Twitter on Oct. 21, deliberately blurred to protect the identity of the subjects, shows a demonstration that appears to be at the Mashhad Medical Society building. At the demonstration, a speaker reads from a statement condemning the use of ambulance and medical symbols by security forces: “We would like it to stop in order to gain social trust.”

The Times verified that the room seen in the blurry footage matches archival footage from the Mashhad Medical Society building’s amphitheater.

Dr. Haar, with U.C. Berkeley’s School of Public Health, said that work of the medical community during protests and civil disturbances is protected under international human rights law.

“The principles of impartiality and independence, of caring for the wounded and not misusing the medical emblem for political gain, are universally accepted foundations on which the entire medical system relies,” she said. “Medical workers have the obligation to treat the wounded and sick. And the government has the obligation to help us do that.”

For many in Iran, the use of ambulances to suppress protests adds to their distrust in the country’s medical system. There have been several reports about Iranians who have been injured at protests getting detained after receiving medical care in hospitals.

In an interview, one Tehran protester said that many people tend to their injuries at home instead of going to the hospital due to a climate of fear.

“We felt most insecure when we saw police. But we have a new level of fear unlocked. Now we feel the worst pains when we see ambulances,” said one Tehran protester. “And every time we’re stuck in traffic, now the dilemma is, what if there’s a real patient in there? Or what if they’re going to kill us?”

Earth Now Has 8 Billion Humans. This Man Wishes There Were None.