WELDON, Saskatchewan — The horror began at 5:40 a.m. on Sunday, when the police received a report of a stabbing on a rural Indigenous reserve in the western Canadian province of Saskatchewan. By the time the rampage was over, hours later, the police said that 10 people were dead and 18 wounded — some apparently chosen at random — in a killing spree that has shaken the country.

One of the two suspects in the mass killings, Damien Sanderson, was found dead on Monday in a grassy area near a house being investigated as part of the attacks on the Cree Nation reserve, the Royal Canadian Mounted Police said. They said his injuries did not appear to be self-inflicted.

The police said a manhunt was still underway for his brother Myles Sanderson, who may also have been injured and may seek medical attention. They said that Myles Sanderson had a lengthy criminal record, and that the public should be vigilant.

The police said they were investigating how Damien Sanderson had died, including whether his brother had killed him.

While details about the men and their motive remained murky, a Saskatchewan Crime Stoppers notice showed that Myles Sanderson had been wanted by the police before Sunday’s attacks.

In a country that prides itself on its civility, the knife attacks at the James Smith Cree Nation and a nearby village called Weldon were one of the worst mass killings in recent memory, and they reverberated across Canada.

In Weldon, a sleepy farming village near the 27-square-mile Cree Nation reservation, some residents said they had hidden in their homes after learning of the attack and had locked their doors Sunday night for the first time ever.

Canada’s bucolic prairie region is known for its rolling landscapes and farming industry. But on Monday, residents of Saskatchewan, with 1.2 million people, woke up to find their province under a global spotlight. And with both suspects still on the loose then, the province was on edge.

Rhonda Blackmore, right, a commanding officer of the Royal Canadian Mounted Police, and the Regina police chief, Evan Bray, with the photographs of Damien and Myles Sanderson, at a news conference on Sunday. Credit…Michael Bell/The Canadian Press, via Associated Press

“I was terrified to go to sleep last night,” said Ruby Works, a resident of Weldon, who said a close friend,an older man who was a bird lover, had been killed in the attack. Ms. Works, 42, said she was out looking for her cat on Sunday when a police officer warned her to go inside.

In Weldon, a community of 160 people that is dominated by two towering grain elevators, residents said anxiety, grief and fear had spread following the attack. About half of the population in the town of less than one-square mile is over 60.

Residents said the town, peppered with dirt roads and bungalows, was the kind of place where everyone knows one another.

“Last night, I locked my doors for the first time, but it was only because my 12-year-old asked me to,” said a resident, April Audette, referring to her daughter.

The attack had particular resonance in Indigenous communities in a country that has been grappling with violence and systemic discrimination against Indigenous people.

The issue has received heightened attention and has become a source of national reckoning in recent years, in part because of grim new discoveries like the one last year of graves of children at a former residential school in British Columbia. For decades Indigenous children were forced to attend the church-run schools, where they were the victims of horrific physical and sexual abuse. Many died at the schools.

Across the country, as most Canadians took Monday off for Labor Day, news broadcasts were dominated by headlines about the killings. “Saskatchewan Mass Murder” said a red banner on the television news report from the CBC, the national broadcaster. Many were asking: How could this happen here — and why?

Residents of Weldon, a village of 160 people, were struggling to come to terms with the violence. Credit…Amber Bracken for The New York Times

Prime Minister Justin Trudeau of Canada, in a brief address on Monday afternoon, said he was “shocked and devastated by the horrific attacks.” He said the flag on Ottawa’s Peace Tower and at all federal buildings in Saskatchewan were at half-staff.

“Sadly, over these past years, tragedies like these have become all too commonplace,” Mr. Trudeau said. “Saskatchewanians and Canadians will do what we always do in times of difficulty and anguish. We’ll be there for each other, be there for our neighbors, lean on each other, help grieve and help heal.”

Chief Bobby Cameron of the Federation of Sovereign Indigenous Nationsin Saskatchewan, called on the authorities to “create safer and healthier communities for our people.”

“Our hearts break for all those impacted,” he said.

As dozens of police officers patrolled communities and combed 13 crime scenesfor evidence, the Canadian authorities advised residents in the James Smith Cree Nation and the Weldon to shelter at home. They expanded the search almost 200 miles south to Regina, the capital of Saskatchewan Province, where thousands had gathered on Sunday for a Labor Day football game.

Before announcing that Damien Sanderson was dead, the police had warned that the attackers were likely to be hiding in Regina.

The Royal Canadian Mounted Police also said in statement that the two men had been charged with first-degree attempted murder and breaking and entering.

In total, 28 people were stabbed. Some of the victims were taken by helicopter to Royal University Hospital, the province’s main trauma center, in Saskatoon.

The Indigenous community in Saskatchewan has proud and deep roots in the area, stretching back thousands of years. The area was historically an important region to hunt bison, according to the City of Regina. The James Smith Cree Nation has 3,412 members, with nearly 2,000 living on its reserve, according to its website; there are a total of about 175,000 Indigenous residents in the province. 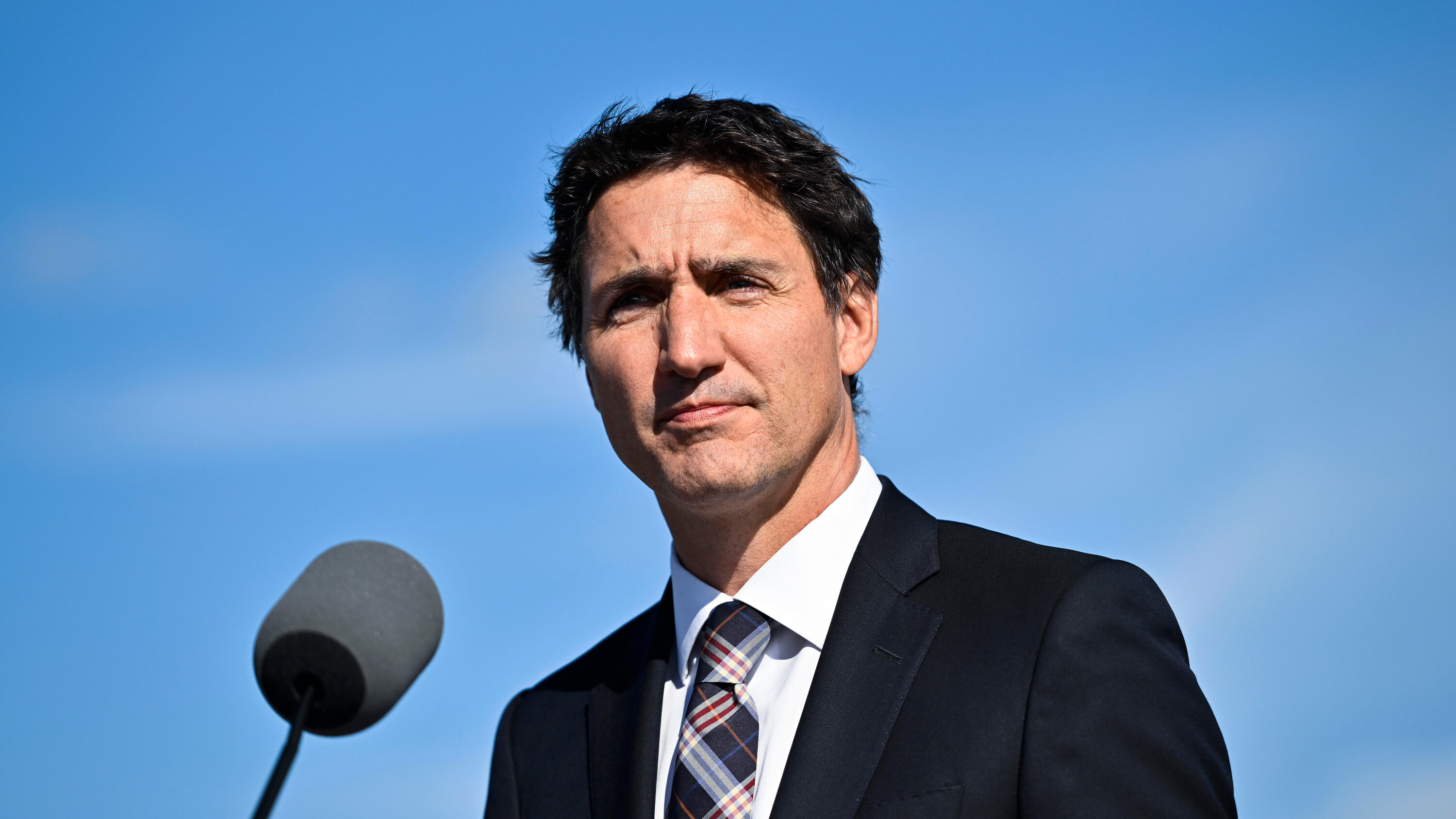 The Canadian prime minister said he was “shocked and devastated by the horrific attacks.”CreditCredit…Justin Tang/The Canadian Press, via Associated Press

In Weldon, residents commiserated with one another as two officers in white forensic suits went through the home of the older victim whom Ms. Works said she knew. Residents said he was a well-known face in the small community who had campaigned to prevent trees in the area from being cut down.

“This man did not deserve to die like this,” said Ms. Works, recalling how she would help him with his shopping and lift heavy bags of kitty litter from his car. “He was a kindhearted man. He would take the shirt off his back and give it to you.”

With helicopters flying overhead and the police searching through the town, Ms. Works’s aunt, Sharon Works, 64, said she and her son had been fielding calls from friends and neighbors who knew some of the victims.

In Regina, some residents ignored the warnings to shelter and stuck to their social plans.

Along Arcola Avenue, a broad, largely fenced off road that the police say the two men were likely to have traveled, crowds turned out for an annual Labor Day classic car show, a fund-raising event for a local food bank.

Ruby Works laid flowers on Monday at the home in Weldon of a friend who died in the killing spree. Credit…Amber Bracken for The New York Times

Ian Austen reported from Weldon, Saskatchewan, and Dan Bilefsky from Montreal. Reporting was contributed by Amber Bracken from Weldon, Vjosa Isai from Toronto and Austin Ramzy from Hong Kong.

Betty Gilpin Is a Vivid Talker

With the Yankees on His Shoulders, Aaron Judge Stays Ahead of Maris

Featured Posts
Would You Have Four Kids if It Meant Never Paying Taxes Again?
7 mins ago

The Future of Balenciaga Is on the Line
1 hour ago