Good morning. It’s Tuesday. Today we’ll look at another sign that New York City is moving back to its prepandemic routines: Housing courts are hearing eviction cases again. We’ll also look at book publishing and its role in the city’s economy. 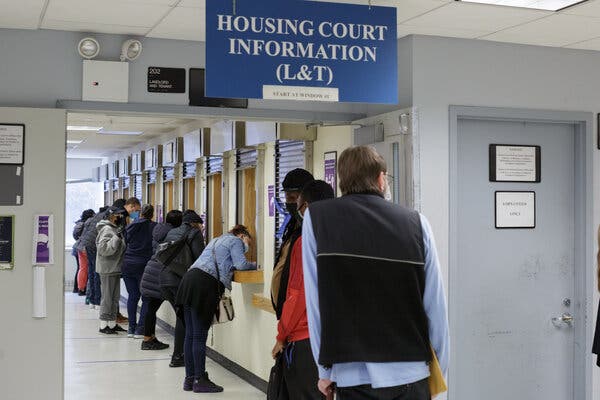 The wheels of justice may turn slowly, as the often-quoted line says, but they are turning again in housing courts in New York City.

The city’s housing courts used to handle more eviction cases than similar tribunals in other cities. The pandemic changed things: New York State imposed a moratorium on evictions. Lawmakers extended it again and again, long after other state and federal eviction protections ended.

The New York moratorium finally expired in mid-January, and tenants have been thrown out of their homes in more than 500 cases since February, according to city data. My colleague Mihir Zaveri says that was about double the number from the preceding 20 months combined, going back to mid-2020, when coronavirus cases in New York were subsiding after the devastating first wave.

[After a Two-Year Dip, Evictions Accelerate in New York]

The number of eviction cases is still below prepandemic levels. But after the pandemic pushed thousands of people to the brink of losing their homes, the uptick is raising questions about how well the housing system can head off a wider crisis of dislocation — and not just because rents are rising again. Tenants’ advocates say a crucial new protection, a free lawyer for any low-income tenant summoned to housing court, has already reached a breaking point.

Several nonprofits tapped by the city to represent tenants are coping with staffing shortages and say they cannot meet the need. Legal Services N.Y.C. has struggled to hire new lawyers to fill vacancies caused by resignations in a tight job market. “Right now we’re trying really hard to grab every single May law graduate who doesn’t have a job,” said Raun J. Rasmussen, the group’s executive director.

Legal Services and the Legal Aid Society, another nonprofit, have called on the courts to slow the scheduling and pace of cases moving through the system. But Lucian Chalfen, a spokesman for the courts, said last week that a slowdown would “accomplish nothing,” because new cases would continue to pile up.

It’s a mostly cloudy day with temperatures near the low 60s. There will be rain and patchy fog late at night, when temps will drop to the low 50s.

Book publishing is very much a New York business. All the biggest publishers are based here, along with many of the smaller ones — 224 in all, according to Labor Department data cited by James Parrott of the New School’s Center for New York City Affairs.

Some 32,000 people work in the publishing industry in New York City, according to data from the Labor Department — a fraction of the number working in finance or tech. Some in the industry moved away during the pandemic, but most of the editors and agents are still here.

How important is publishing to the city’s economy? Parrott told me by email that “as an industry, book publishing has far greater significance for the N.Y.C. economy than how many people it directly employs or what their total pay is.” He also said that book publishing “is inseparable from the city’s standing as an international cultural capital and the tremendous activity associated with that.”

So New York City is still where most book business is done. But once books are written, edited, printed and bound, they have to be sold. I asked my colleague Elizabeth A. Harris about a bookseller that has a unique place in the publishing ecosystem but has closed several stores in New York City in the last decade — Barnes & Noble.

Barnes & Noble was once a villain to publishers, but now the publishing industry seems to be on its side. What happened?

Barnes & Noble used to be known for squeezing publishers for more favorable terms and was considered by many to be an existential threat to independent bookstores. But now, Amazon is by far the most dominant player in book selling — it sells more than half of the physical books in the United States. That doesn’t include e-books and audiobooks, which Amazon dominates.

So Barnes & Noble’s position in the business has shifted. Today, it is seen by independent stores as helping to keep publishers invested in distributing physical books to shops around the country. Publishers see its 600 stores as a crucial way to get physical books in front of customers.

When readers shop online, they tend to buy what they’re looking for. But when they’re in a bookstore, they might walk in looking for a novel and come out with two or three other titles as well, which they hadn’t planned to buy. That kind of accidental discovery is hugely important to publishers.

[How Barnes & Noble Went From Villain to Hero]

Barnes & Noble’s sales of books were up 14 percent last year. How did Barnes & Noble pull that off? Has the company changed the way it decides what books to sell?

Part of this is that Barnes & Noble has tried to be savvy about the books it stocks and promotes in its stores.

It has, for example, paid close attention to books that have taken off on TikTok, which has become a significant force in selling books. Viral clips of readers weeping over books they love can sell a ton of copies! That’s actually put a lot of books on the best-seller list, including titles that came out years ago, which is unusual.

You wrote that Barnes & Noble stopped taking fees from publishers to put books where they’d be seen, like by the cash registers or by the door where you walk in. How did that work out?

It sounds like it was free money, right? Collect big fees and put a few books in the window. But it actually meant that books people weren’t interested in reading were right up front, while the books they actually wanted were harder to find.

Now, Barnes & Noble store managers decide for themselves where they want to put the books, and it seems to be working out well.

Despite the 14 percent increase in book sales, overall sales were up only 3 percent. What else figured in the total? Or, putting it another way, what dragged the numbers down last year, and is Barnes & Noble moving to cut parts of its operation that were not profitable?

A lot of this was Covid drag. Their cafe business was down a lot. Omicron rolled in just as the crucial holiday shopping season was heating up. And most of their stores had no events for almost two years — author readings and book signings can sell a lot of copies.

As the country continues to open up, those things are expected to improve.

With the weather finally getting warm, I put on the spring version of my uniform: black T-shirt, loose black jeans, beige sneakers and tortoiseshell glasses. My hair was tucked behind my ears and canvas tote bag was on my shoulder.

I was on my way to get Thai food with a friend when I looked across Willoughby Street toward Flatbush Avenue and saw him: loose black jeans, black T-shirt, beige sneakers, tortoiseshell glasses, hair tucked behind the ears and an overflowing canvas tote bag.

He appeared to be going somewhere important, maybe the airport.

He pointed at me.

We both burst out laughing and headed our separate ways.

Tags
Can Ci̇ty New York Out That

Tiger Woods: My Leg Feels OK, as Long as I Don’t Play Golf
6 hours ago

With a ‘Special Group,’ the Mets Find Ways to Win
6 hours ago