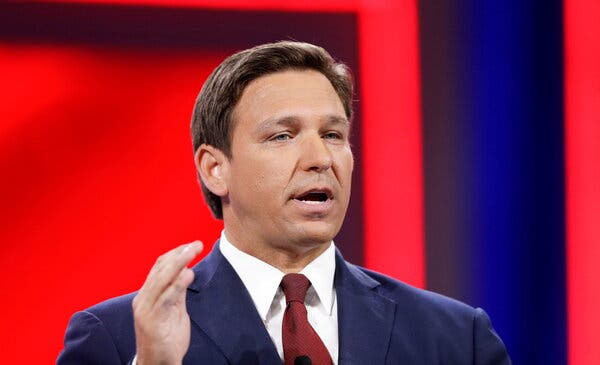 A conservative Jewish organization asked Gov. Ron DeSantis to speak at a leading Jewish museum in Manhattan. My colleague Liam Stack writes that the Tikvah Fund made a last-minute invitation to DeSantis to join the event at the Museum of Jewish Heritage.

DeSantis was to talk about the vibrancy of Jewish life in Florida, a topic the fund covered in the April issue of its magazine, a month after DeSantis signed legislation prohibiting classroom instruction and discussion about sexual orientation and gender identity in elementary schools. Opponents have called the law “Don’t Say Gay.”

But a day after the fund told the museum that DeSantis would be on the program, Trudy Chan, a museum official, asked the fund to “pause” its $11,500 deposit payment and asked to speak with its leaders, according to emails. In subsequent phone calls, Eric Cohen, the chief executive of Tikvah, was informed that an event with DeSantis could not be held at the museum because Florida’s “Don’t Say Gay” bill does not align with its values of inclusivity, Cohen told The Times.

[What Happened When a Conservative Jewish Group Invited DeSantis to Speak]

“The museum has implied that Tikvah wanted to host a partisan political event,” Cohen said. “Our event endorses no candidates and serves no political party. It is all about ideas, just like every prior conference we have held at the museum.”

The museum’s chief executive, Jack Kliger, declined several requests to be interviewed. The museum has explained its actions in a series of public statements that expressed its concern with the political nature of the event and the level of security DeSantis might need. A spokesman emphasized that the museum had had nothing to do with the event outside of discussing renting its space to the Tikvah Fund.

Politics have become increasingly challenging for Jewish institutions in recent years as Americans have become divided over issues like L.G.B.T.Q. policies and the results of the 2020 presidential election. New York City is no exception. Neighborhoods with a large population of Reform Jews voted decisively for President Biden in the 2020 election, while those with many ultra-Orthodox Jews overwhelmingly voted for Donald Trump.

“Any institution that is built today on the need to serve both conservatives and progressives, whether it is the N.F.L. or a Jewish museum or anything else, is finding that work harder and harder to do,” said Peter Beinart, a writer and editor at large for Jewish Currents, a progressive magazine, who also contributes to The New York Times.

The Tikvah Fund first made its complaints against the museum in an opinion piece for The Wall Street Journal, written by Cohen and Elliott Abrams, a national security official in several Republican presidential administrations. They accused the museum of engaging in cancel culture and speculated that its leaders may have been afraid of protests because “a lot of people dislike Mr. DeSantis.”

After their article was published, the museum issued a statement that said the piece “contains many factual inaccuracies” and described the decision as “simply a contractual and logistical decision.”

It invited DeSantis to “visit” the museum as a tourist. It also accused Tikvah of “trying to create a fight where none exists.”

The Tikvah Fund will still present its conference at Pier 60 in June. Appearing alongside Governor DeSantis will be speakers including Mike Pompeo, secretary of state under Trump.

Prepare for a chance of light rain during the day with temps around 70. The chance of rain continues late at night, with a low around 60.

“Dyslexia holds back too many of our children in school, but most importantly in life,” Mayor Eric Adams said, adding that it “haunts you forever until you can get the proper treatment that you deserve.”

It is personal for him. Adams has said his own undiagnosed dyslexia hurt his academic career.

On Thursday he and school officials announced a plan to screen nearly all public school students for dyslexia, with 80 elementary schools and 80 middle schools set to receive additional support for addressing the needs of children with the disability. The city will also open two new dyslexia programs — one at P.S. 125 Ralph Bunche in Harlem and the other at P.S. 161 Juan Ponce de León in the South Bronx — with the goal of opening similar programs in the other three boroughs by next year.

“One of the reasons I know that we must do this, this is not an option, is because of those personal struggles and the number of my friends in school who dropped out of school, left school early, never to return merely because they were dealing with reading issues,” Adams said. He said the city would have “the largest, most comprehensive approach to supporting students with dyslexia in the country.”

At the same time, school leaders are requiring principals to pivot to a phonics-based literacy curriculum, which literacy experts say is the most effective way to teach reading to most children.

My colleague Lola Fadulu says New York is facing a literacy crisis: Fewer than half of all the city’s third to eighth graders, and just 36 percent of Black and Latino students, were proficient on the state reading exams administered in 2019, the most recent year for which there is data. Research suggests that the coronavirus pandemic has only worsened those outcomes.

Adams and David Banks, the schools chancellor — both Black men who attended the city’s public schools — have said that addressing the city’s reading crisis, especially eliminating racial disparities in literacy outcomes, are top priorities. The mayor often talks about reading in relation to the school-to-prison pipeline, noting that 30 percent to 40 percent of prison inmates have dyslexia.

Kim Sweet, the executive director of Advocates for Children of New York, applauded Adams’s plans, saying they could “have a transformative impact if implemented well.” She added that the group looked forward to working with education officials to ensure that “all children learn to read, no matter where they go to school.”

I had moved into my new apartment in Brooklyn and was living alone for the first time as summer began. I worried about being lonely, but I told myself it was an important step, that I was finally a real adult.

My first night there, I realized I lived across from a basketball court where people gathered to play music and talk. How nice! I thought. I’ll get to know the community.

Every night during the summer, the gatherings continued. I opened my windows and let the sound into my studio, the noise of the neighborhood comforting me against the solitude imposed by being home alone.

As the weeks passed, the music gradually got louder. Sometimes, I would lean my head out the window and wave, asking if the people playing it could please turn it down, just a little.

Often, this worked, but sometimes it didn’t. The music seemed to be loudest on weeknights. This is becoming a little less pleasant, I thought to myself one night in October.

Then, one Tuesday night after midnight, the music across the street was so loud that my windows rattled. I decided I had to call in a noise complaint. Feeling sheepish, I dialed 311. A man named Ron picked up.

I spoke quietly and apologized profusely for what I was about to say. I didn’t want the party to be shut down, but perhaps the people could turn it down a tad?

Ron asked for my address. When I gave it to him, he gasped.

“I know exactly what you’re talking about,” he said. “I live right next door to you.”

I laughed, stunned by the coincidence, and excited to be finally meeting a neighbor.

“And don’t worry about calling,” he added. “I get complaints about these guys every night.”

Glad we could get together here. See you on Monday. — J.B.

‘What New York Is All About’: Welcome Back to the Piano Bar