We’ll observe the birthday of a famous Army general who deserves a promotion, according to his fans, even though it’s been 137 years since he died. We’ll also look at Mayor Eric Adams’s vision for the city’s recovery, outlined in his first State of the City address. 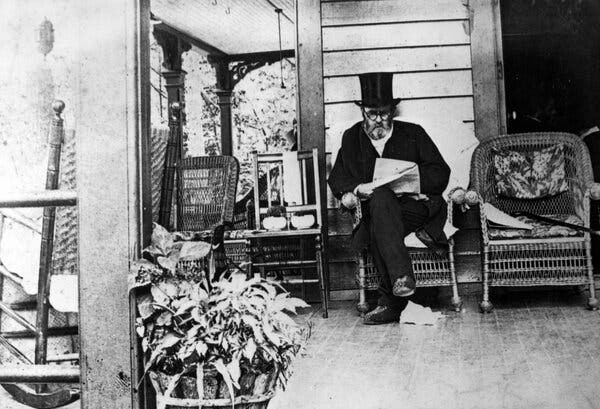 For once, this is not a joke: Who is buried in Grant’s tomb?

A general who doesn’t have the Army’s highest rank. Not yet, anyway.

Fans of Ulysses S. Grant are campaigning for a promotion that would elevate Grant to a rank held by only two other former generals, George Washington and the World War I hero John J. Pershing — general of the armies of the United States, above even five-star generals.

Grant became the nation’s first four-star general in 1866, after the Civil War. His supporters had hoped the posthumous promotion would come through in time for the 200th anniversary of Grant’s birth, which is today.

But such things take time. The Army did not make Washington a general of the armies until 1978, two years after Congress passed a resolution calling for the move — and 179 years after his death.

Grant “was the first of the world’s modern generals,” said Frank Scaturro, the president of the Grant Monument Association, which is involved in a commemorative ceremony beginning at 11 a.m. today at the General Grant National Memorial, on Riverside Drive at West 122nd Street. “This promotion would be a recognition of what he meant to the modern U.S. Army and the survival of the republic and the broader cause he believed in, emancipation, which became the cause of the union in the Civil War.”

A similar joint resolution on Grant’s behalf was introduced last fall with bipartisan support. Two sponsors in the House are infrequent allies: Rep. Adriano Espaillat, a Democrat from Harlem who voted for former President Donald Trump’s impeachment in 2019 and 2021, and Rep. Elise Stefanik, who voted against impeachment both times and became the No. 3 Republican in the House with Trump’s endorsement.

Last week three of the sponsors of the Grant resolution — Senator Roy Blunt, a Republican from Missouri; Senator Sherrod Brown, a Democrat from Ohio; and Representative Ann Wagner, a Republican from Missouri — wrote to Secretary of Defense Lloyd Austin, asking for a review of Grant’s record and “a determination as to the merits of a posthumous promotion.” They argued that Washington’s promotion in 1978 had the effect of “lowering the grade to which Grant was appointed in 1866.”

A Pentagon spokesman declined to comment, saying the Defense Department would respond to the three lawmakers.

The Army hasn’t had any five-star generals since General Omar Bradley died in 1981, and F. Lee Reynolds of the Army Center of Military History said it is not clear how many stars a general of the armies would have. That has not been detailed by Congress or the Army itself, he said. He noted that Washington’s promotion in 1978 stipulated that he would always be the Army’s highest-ranking officer, even if there were other generals of the armies.

For much of the 20th century, Grant had an ignominious place among presidents. He was usually near the bottom when historians ranked them. His reputation — great general, great writer but dismal chief executive — has been rehabilitated at least somewhat in the last 25 years. His fans say he was untouched personally by the corruption that swirled through his administration. Scaturro, the author of “President Grand Reconsidered” (1998), said his “political career was dragged through the mud.”

“I think he was punished” — by history — “for doing the right thing,” he said. “The age of Grant was the age of America as a multiracial republic,” with Grant overseeing Reconstruction and attempting to keep the country on the course set by President Abraham Lincoln. “It took a generation for that to be reversed by Jim Crow,” Scaturro said.

One more thing. About the riddle about Grant’s tomb, a staple of the Groucho Marx quiz show “You Bet Your Life” in the 1940s and 1950s: The correct answer is “no one.”

“Technically they’re not buried,” said Derrick Head, a National Park Service ranger at the General Grant National Memorial, referring to Grant and his wife, Julia. “They’re above ground. They reside in two sarcophagi.”

Expect a mostly sunny day near the mid-50s. The evening is mostly clear, with temps dropping to the high 30s.

The mayor’s vision for recovery

In State of the Union or State of the City speeches like the one Mayor Eric Adams delivered on Tuesday, there is usually a sentence that says “the state of the [blank] is [blank].”

Obviously, Adams filled in the first blank with “city.” His choice for the second blank was “strong” — even though, as he acknowledged seconds later, “We are still in a time of profound concern.”

The 116 days since he took office have been marred by violence, including a mass shooting on the subway this month. Coronavirus cases are climbing again, driven by new subvariants of Omicron. The city’s unemployment rate, 6.5 percent in March when seasonally adjusted, is far higher than the 3.6 percent national rate.

But Adams was upbeat and called for “a new, hopeful chapter,” arguing that he could jump-start the city’s comeback by deepening his focus on public safety and inequality.

My colleague Emma G. Fitzsimmons writes that the mayor, a former police captain, said he would spend more money to tackle what he cited as root causes of crime: guns, mental illness and homelessness. He said the city’s recovery would not happen unless New Yorkers feel safe.

“We cannot have a city where people are afraid to walk the streets, ride the subway or send their children to school,” he said.

He outlined other spending priorities in his latest $99.7 billion budget proposal, including $5 billion for affordable housing over 10 years and $55 million to expand a program that sends emergency medical technicians and mental health professionals to certain 911 calls. He also said he would soon release a plan to expand child care that would allow some families earning $55,000 a year to pay only $10 per week.

Adams has faced criticism in his first 100 days for bringing back controversial anti-crime police units, clearing homeless encampments, rolling back pandemic restrictions and appearing reluctant to release his tax returns. But he found positives to accentuate — saying that 2,300 guns had been taken off the streets, for example. He also said he had taken inspiration from President Franklin D. Roosevelt, who faced a “cascade of crises not unlike what we are experiencing today” during the Great Depression.

“Then, just as now, there was no easy solution or quick fix,” Adams said. “F.D.R. understood that the people needed an honest reckoning of the problems and bold plans to solve them. That is what I intend to deliver for my fellow New Yorkers.”

I was walking slowly around Stuy Town, fully immersed in my phone as I prepared for a job interview.

I was so absorbed in what I was doing that I almost bumped into an older man who was out for a walk. He looked at me with a touch of disapproval.

“I’m so sorry,” I’m said. “I’m interviewing for my dream job tomorrow, and all I can do is prepare.”

He continued on, resuming his brisk pace. Then he turned his head over his shoulder. He had a smile on his face.

Tags
General Grant Sai̇d That Who

Some of Eric Adams’s Hires Have Troubling Pasts. He’s Fine With That.