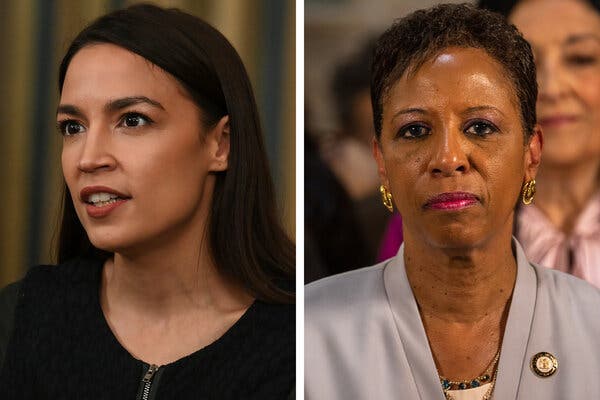 Now, Ocasio-Cortez has accused the speaker of the City Council of “dirty politics” during recent budget negotiations. Ocasio-Cortez asserted in an Instagram video on Tuesday that the speaker, Adrienne Adams, had punished Council members who voted against the $101 billion budget deal that was approved on a 44-to-6 vote.

Like Ocasio-Cortez, Adams is a Democrat, but she is a moderate. The six dissenters largely share Ocasio-Cortez’s progressive views.

Ocasio-Cortez took issue with what she called “unconscionable” cuts to education and said that Adams had stripped funding for community groups supported by the dissenters.

“Who defunds after-school programming for underprivileged kids in public housing to score a political point?” she said. “That is like movie-villain type of decision-making right there.” She also said she wanted to talk about “what it looks like when politics gets dirty within your own party.”

My colleagues Jeffery C. Mays and Emma G. Fitzsimmons write that the budget included a $41.6 million pot of discretionary funding controlled by the speaker. At first glance, it appeared that none of that money had been allotted to community groups and programs the six had put forward.

Adams’s aides said that was not entirely so, saying that some of the programs had received funds from outside the speaker’s discretionary pot. In other cases, the programs got discretionary funds, but the Council member who requested the money was not listed as a sponsor.

“Of course my office would love the same credit our colleagues got for advocating for these vital programs,” said Tiffany Cabán, a Queens councilwoman who is an ally of Ocasio-Cortez and who had sought funding for the Variety Boys & Girls Club in her district. “But what is most important is that we secure the funds and prevent any reduction in services.”

The Boys & Girls Club had hoped for $150,000 but got only half that amount — and not from the speaker’s account. And the allocation was credited not to Cabán but to Shekar Krishnan, a Council member from another district.

In effect until Monday (Juneteenth).

The Justice Department has charged the suspect in the Buffalo supermarket massacre with 26 counts of hate crimes and weapons violations. Some of the charges could carry the death penalty — a possibility that Attorney General Merrick Garland did not rule out, despite a moratorium on executions that he announced 11 months ago.

Garland said the suspect believed in “the vile theory that only people like him belong in this country.” In an affidavit accompanying the criminal complaint filed on Wednesday, an F.B.I. agent said the suspect, who was white, wanted “to prevent Black people from replacing white people and eliminating the white race, and to inspire others to commit similar attacks.”

Garland also said at a news conference that the suspect, Payton Gendron, 18, had apologized to a white employee whom he had shot in the supermarket before resuming fire.

We looked at book publishing and its place in the city’s economy last month. Some 827 million print books were sold in 2021, a record, but the tracking system used now goes back only 20 years. And as we all know, it’s an online world now, even for booksellers. Browsing online is different from wandering into a bookstore and picking up a book you hadn’t heard about — and can’t put down.

A new app called Tertulia (the Spanish word for a literary salon, according to some dictionaries) aims to change the way people find books online. Two of its creators are based in Brooklyn, the third in Stockholm. I asked my colleague Alexandra Alter, who covers the publishing industry, to put it in context.

You wrote that apps have struggled to reproduce the kind of serendipity that comes from browsing in a bookstore. Have a lot of apps tried?

Yes, there have been several attempts to solve this problem through apps and social media platforms, with varying degrees of success.

Ingram Content Group, the largest book distributor in the United States, created a book discovery platform called Bookfinity, which assigns its users a “reader type,” and there are other apps with cute names like Booqsi (which looks a little strange but is pronounced “book-see”).

There are also popular user-generated book recommendation platforms like Goodreads. But that hasn’t been an online discovery tool for books that has taken off in the same way Netflix and Spotify have transformed and personalized streaming entertainment.

Why does Tertulia think it can do better? What is Tertulia doing to give its users the feeling of discovery — of finding a book they didn’t go looking for?

A lot of what readers see when they go searching for a new book online includes books that are already best-sellers or preordained best-sellers. It’s not just that Amazon’s algorithms tend to surface books that are selling well, it’s also the case that publishers devote the bulk of their marketing dollars to books that they know will succeed — which are often books by celebrities or big-name authors.

Tertulia is using a different metric. It’s trying to measure and distill online conversations about books, both in volume and in quality.

It has “most-talked-about lists” in different genres that rank books according to how widely they get mentioned and how positive the reviews and conversations are. It also offers personalized recommendations based on a survey that users take, which, in turn, is based on what kinds of authors and genres they like and what kinds of experts (book critics, chefs, scientists) they want to see recommendations from.

So it’s simulating the conversation we’d have if I asked you, “Read any good books lately?”

But Tertulia can also sell the books, right? Is that where it will make money?

Yes, that’s another thing that sets Tertulia apart from some other recommendation apps or even Goodreads, which is owned by Amazon but doesn’t sell books directly on its own.

Tertulia is partnering with Ingram, so it has access to Ingram’s catalog of 15 million books and can ship directly to customers. It’s just print for now, but there are plans to add e-books and audiobooks.

It’s still unclear how independent booksellers will react to this new competitor. They already face such crushing competition from Amazon, and now they have a new, though small, online bookseller to worry about losing customers to.

For Tertulia, I think the biggest hurdle is going to be convincing people to download an app and take a survey to get started.

My sister, who moved to California more than 30 years ago, came for a visit. Feeling nostalgic, we decided to go to Coney Island, where we grew up.

Strolling along the boardwalk, we encountered a small crowd gathered around a street performer. He was playing guitar and accompanied by about 10 parrots of various colors, shapes and sizes that were singing along with him, to everyone’s delight.

My sister could not contain her enthusiasm.

“Oh, my gawd!” she blurted out in her distinctive Brooklyn accent.

A yellow-naped Amazon that was the most talented singer in the troupe stopped singing.

“Oh, my gawd!” it exclaimed in a perfect imitation of my sister, repeating it over and over and opening its beak wide to put more emphasis on “gawd.”

The guitarist tried, but he could not coax the bird to abandon its new catchphrase.

Tags
App Had New That Who

Tens of thousands of civilians are now largely stranded in the middle of one of the war’s deadliest battles.

Featured Posts
MAGA Voters Send a $50 Million G.O.P. Plan Off the Rails in Illinois
1 hour ago