Good morning. It’s Wednesday. We’ll look at rent increases that are on the way for two million New Yorkers. We’ll also catch up on the final debate between the Republicans running for governor. 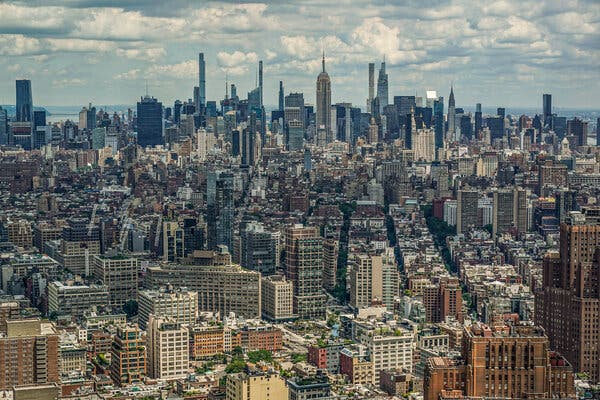 As expected in a year when other consumer staples like food and gasoline have surged, the panel that regulates rents in the city approved increases for tenants — 3.25 percent on one-year leases and 5 percent on two-year leases.

Housing advocates had pressed for a rent freeze or even a rollback, while landlords had argued that buildings would inevitably deteriorate unless rental income kept pace with expenses. The increases cover about one million rent-stabilized homes, which account for about 28 percent of the city’s housing stock and 44 percent of the rentals.

The rent board session was raucous, with audience members blowing whistles and shouting slogans like “housing is a human right.” When the board chairman, David Reiss, outlined the reasons for the increases, dozens of people stood up, turned their backs to him and chanted, drowning him out.

The 5-to-4 vote was a setback for tenants, as Mayor Eric Adams acknowledged in a statement after the vote. He said the increases would “unfortunately be a burden to tenants at this difficult time — and that is disappointing.” But he also expressed sympathy for small landlords who he said “are at risk of bankruptcy because of years of no increases at all.”

The vote by the board was the first since Adams took office, and as my colleague Mihir Zaveri writes, the board took a different approach than it had under Adams’s predecessor, Bill de Blasio. The highest annual increases during his time in City Hall were 1.5 percent on one-year leases and 2.75 percent on two-year leases.

But with the average rent on a newly leased Manhattan apartment reaching $4,975 in May — up 22 percent from 2021, according to the real estate firm Douglas Elliman — the rent-stabilization system has become a crucial source of affordable housing. The median monthly rent for rent-stabilized apartments is $1,400, according to a recent city survey, compared with $1,845 for unregulated homes. And the median income for people living in rent-stabilized homes is about $47,000, compared with $62,960 in unregulated homes.

The last time there was a significant increase — 4 percent on one-year leases and 7.75 percent on two-year leases — was in 2013, the last year de Blasio’s predecessor, Michael Bloomberg, was in office.

On Tuesday Adán Soltren, whom Adams appointed as one of two tenant representatives, voted against the increases. He called the decision to support them “unjust” and told his colleagues, “Your decision will result in millions of people suffering while corporations and investors continue to profit.”

Christina Smyth, one of two board members representing landlords, called the increases inadequate. “We are risking the decay of rent-stabilized housing,” she said.

Expect a chance of showers with temperatures near 70. At night, showers and thunderstorms are likely with temps in the mid-60s.

In effect until July 4 (Independence Day).

In an hour that turned increasingly contentious, the four Republicans running for governor of New York appeared together one last time, making their case before the primary next week.

They spent much of the hour, broadcast on the conservative news channel Newsmax, playing to the Republican base, describing their devotion to former President Donald J. Trump and their disdain for Gov. Kathy Hochul, the incumbent Democrat they hope to replace.

“Kathy Hochul is going to get fired,” declared Representative Lee Zeldin, a four-term congressman from Long Island who was chosen as the party’s designee at a convention in March. “I’m looking forward to removing her from this office.”

Zeldin was flanked on the stage of the Kodak Center in Rochester, N.Y., by the three other Republicans who also want to run against Hochul — Rob Astorino, a former Westchester County executive; Andrew Giuliani, the son of former Mayor Rudolph Giuliani of New York City; and Harry Wilson, a corporate turnaround specialist who, as an official on President Barack Obama’s automotive task force, helped take General Motors in and out of bankruptcy.

After about 40 relatively restrained minutes, the sniping intensified, with Giuliani calling Zeldin “a flip-flopper” and Zeldin saying Giuliani’s “claim to fame” was that the actor Chris Farley had mocked him on “Saturday Night Live” 30 years ago “for being,” Zeldin said, “an obnoxious kid.”

Giuliani — who has said that he sees his father and Trump as models for the kind of governor he aspires to be — was making his first in-person debate appearance. In the first two Republican debates, hosted by stations in New York City, Giuliani, 36, took part from a separate location because he was unvaccinated. But on Tuesday, he was on the same stage.

Talking about his time in the Trump administration, he said, “When I think about the work I did with President Trump in the White House, that’s the kind of change that we need in Albany.”

Zeldin, who was once considered a moderate, has also been a Trump stalwart, though in a debate on Monday night he stopped short of saying the 2020 election had been stolen. On Tuesday in Rochester, he seemed more attentive to Trump’s signature policies, saying he believed that the former president’s border wall should be completed.

Asked what they would do to reduce crime, Giuliani and Zeldin said they would fire Alvin Bragg, the Manhattan district attorney. Wilson said it was “unacceptable for New Yorkers to live on unsafe streets” and said that “an extended family member” had been killed recently “by someone out on cashless bail” — his term for a change in state bail law that Democrats in Albany pushed through in 2019 and Republicans want rolled back.

Giuliani said that on his first day as governor, he would tell the leaders of the Assembly and the State Senate, both Democrats, that without a “full repeal” of the bail law, “I’m not funding anything in our upcoming budget negotiations.”

Bolling asked the candidates about inflation, abortion and Medicaid fraud. Wilson promised deep reductions in property taxes and income taxes, as did the other candidates. And despite the recent racist massacre in Buffalo, none of the four supported any new gun control measures, with Zeldin saying the state’s gun laws “go too far as is.”

I was on the M104, and a woman was talking loudly on her phone. She was explaining to whomever she was talking to about how she had flirted with a guy to make her ex jealous.

At one point, her voice became a mumble, and the man sitting across from her interrupted.

“Excuse me, can you please raise your voice?” he said. “It sort of dropped and we couldn’t hear what happened.”

The other passengers applauded.

Featured Posts
MAGA Voters Send a $50 Million G.O.P. Plan Off the Rails in Illinois
1 hour ago