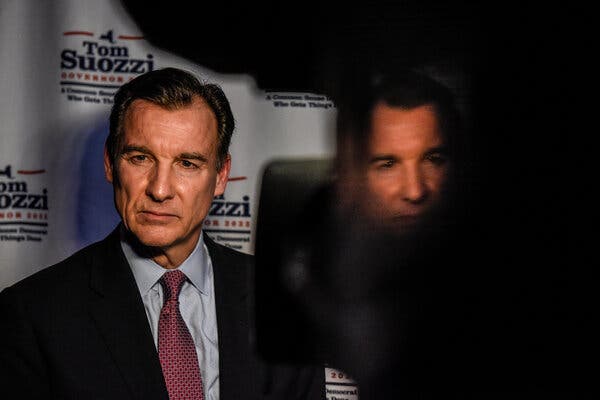 “I could stay in Congress the rest of my life if I wanted to and keep on getting re-elected, I believe,” Representative Thomas Suozzi said — and many Democrats wish he would.

Among them: Representative Hakeem Jeffries of Brooklyn, who is widely talked about as a potential speaker of the House. And former Gov. Eliot Spitzer, who beat Suozzi handily in a primary 16 years ago. And Hillary Clinton, who urged Suozzi to do his part to help keep Democratic control of the House.

Running for governor would not further that objective. But Suozzi is building a campaign around fighting crime, cutting taxes and claiming that Gov. Kathy Hochul is not up to the job.

My colleague Nicholas Fandos says the race is probably Hochul’s to lose. She has a double-digit lead in recent polls, far more cash to spend and the support of a Democratic establishment eager to see New York’s first female governor win a full term. But Suozzi seems to be finding an audience among New Yorkers who have doubts about Hochul. “New Yorkers are just not going to forget about this poor judgment she’s exercised,” Suozzi said the other day after Hochul’s handpicked lieutenant governor resigned amid corruption charges.

The question is whether he can attract the broad spectrum of voters needed to win.

But at times Suozzi seems to have gone out of his way to alienate another powerful block of primary voters — progressives.Other prominent Democrats dislike the tone of his attacks on the state’s first female leader, whom he often refers to as an unqualified “interim governor.”

“What he seems to be saying is, ‘I should be governor because I can do it better,’” said Jay Jacobs, the state Democratic Party chairman. “The underlying implication is that he is a male and she is a female. That’s not where this party should be going.”

Suozzi said that Jacobs, who chaired his 2006 campaign, was “absolutely wrong.” He also defended his approach on Hochul: “Kathy Hochul has not been elected governor of New York State, and she is serving from now until the end of Andrew Cuomo’s term,” he said. “The definition of that is interim.”

It’s another mostly sunny day near the high 60s with temps dropping to the mid-50s during the partly cloudy evening.

The plan to revitalize Penn Station

New York State wants to remake the shabby Penn Station transit hub with a big real estate development. I asked my colleague Matthew Haag, who covered the revitalization with Dana Rubinstein, to explain what’s in the works.

How much is it going to cost? Who’ll be on the hook if the project doesn’t go as Gov. Kathy Hochul expects it to?

It’s best to think of the overall project in two parts: Penn Station and the 10 skyscrapers.

The reconstruction of Penn Station, along with cosmetic improvements there and an additional tunnel under the Hudson River, is expected to cost $30 billion to $40 billion. The new towers, with more than 18 million square feet, would be privately financed. Most of the towers would be built on properties owned by Vornado Realty Trust, one of the city’s largest real estate groups.

New York State is leading the upgrades at Penn Station, and state officials said that New York’s share of those costs is expected to be just a fraction of the total — around $10 billion — because New Jersey and the federal government would also contribute. But nothing has been written in stone, so the cost, and how it would be shared across all stakeholders, could change. If it goes as planned, construction would start in 2024 at Penn Station and be completed in 2032.

To pay for the work at Penn Station, Hochul wants to build the 10 skyscrapers around Penn Station, which will mostly contain office space but will also include hotel rooms, retail space and residences. The revenue brought in by the buildings would be used to pay off the construction costs at Penn Station.

The last tower would be finished in 2044, creating a 12-year window between the completion of Penn Station and the last building. If revenue from the new buildings falls short of what would be needed to pay off the debt, taxpayers would be forced to cover the bill.

If there were a shortfall, the city would be protected because the state would cover the costs, state officials said. Still, it would be taxpayers on the hook.

The Independent Budget Office, the agency that monitors city budget and tax revenues, said it was nearly impossible to analyze the plan on its merits. The agency said there was a dearth of information, especially about projected construction costs and estimated revenues from the towers.

State officials told us that they shared the budget office’s desire to get a full accounting of the costs and claimed that all the numbers would be finalized before the project is approved in the coming months by the Empire Development Corporation, the state agency overseeing the project.

The renovations announced by Hochul appeared to be a reduced version of what her predecessor, former Gov. Andrew Cuomo, had envisioned. So New York State is in charge. What about City Hall?

When Cuomo unveiled the scope of the development, there was immediate concern among local residents, elected officials and community leaders that it was too big.

After Cuomo resigned and Hochul took office, she put her imprint on the project with some modest changes. But the broad parameters of the project — 10 towers and a new Penn Station — stayed largely the same as under Cuomo’s plan.

While New York State is leading the project, City Hall has taken a back seat. A spokesman for Mayor Eric Adams told us he still supports the project but “in a fiscally responsible way.”

Community opposition has continued. What do critics of the plan say?

The budget office report echoed many criticisms raised by opponents, including those of Layla Law-Gisiko, a community board member in Midtown Manhattan. Law-Gisiko, who is running to represent the area in the State Assembly, told us “the project needs to be retired.”

It is 2 a.m. I dash up the subway stairs to catch the F back to Manhattan.

Just as I get to the platform, the train doors close and the train begins to pull away. The digital message board says the next one will arrive in 20 minutes.

I wander over to a bench and sit. As I wait for the train, a boy runs merrily up the stairs onto the platform. He has a huge smile on his face while he stares across the tracks at the other platform.

A girl there beams back at him. They start to play rock-paper-scissors. They don’t say a word. They play about six rounds, laughing and giggling at the end of each one.

The train on the opposite track whooshes into the station, cutting the boy and girl off from each other. Seconds later, she appears in the train window, smiling again and waving goodbye.

The boy waves back as he watches her train pull away.

Tags
Ci̇ty Off State That Who