Good morning. We’ll get expert guidance on what to expect at the Met Gala tonight, and we’ll preview a new advertising campaign intended to scare drivers into slowing down. 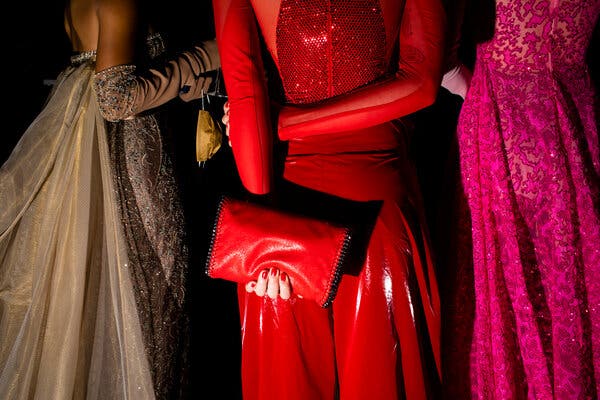 It’s the first Monday in May, and in the world of fashion and entertainment, that means one thing: The annual extravaganza known as the Met Gala will play out tonight. I asked Vanessa Friedman, our fashion editor, what to expect. Here’s what she told me:

I’ve been covering the Met Gala for something like 18 years, give or take a party or two. Some, I’ve attended in person, though since I joined The New York Times, I’ve watched from afar (in keeping with the paper’s policy of not accepting free tickets).

Either way, what has struck me the most over time is how a party that started as a fairly standard New York City cultural fund-raiser back in 1948 has become a potent distillation of social, political, financial and cultural power — and, lately, a creator of viral entertainment. Each year everyone says, “Wow, there’s no way it can get any crazier” — or raise more money — and each year it does. It’s really a business unto itself, more than a mere black-tie bash at the Metropolitan Museum of Art.

So, in that context, what to expect? (Besides a traffic jam on upper Fifth Avenue this evening. The arrivals begin at 5:30 p.m..)

First and foremost: The fashion is going to be truly over-the-top.

The dress code this year is “Gilded Glamour,” which at first made me think of “Goldfinger,” the 1964 James Bond film that featured murder-by-gilding. It’s actually a reference to “The Gilded Age,” both the recent streaming series and the actual historical time period, in which New York society (Astors, Vanderbilts, Whitneys) embraced highly decorative party dresses and white tie. Put those two things together, and odds are high we will see a lot of gold and a lot of gewgaws, plus bustles, corsets, big sleeves, and trains. Maybe even some panniers.

[Everything You Need to Know About the Met Gala 2022]

It’s theoretically linked to the Costume Institute show it is celebrating, “In America: An Anthology of Fashion,” which will be situated in the Met’s American period rooms and conceived to recontextualize the way fashion has helped craft American identity since the mid-19th century. But while I’d like to say there may also be some pointed social commentary-via-gala dress on the fact that the Gilded Age was also a period of extreme income inequality, there I think the odds are low.

Second: The guest list — kept secret until attendees hit the red carpet — will be as eye-popping a mix as always. Tickets are invitation-only, and each attendee is personally approved by Anna Wintour, the editor of Vogue and the maestro behind the party, so just because you can buy a ticket ($35,000 each, with tables costing $200,000 to $300,000) doesn’t mean you get to go.

Regulars like Rihanna and Elon Musk may or may not make it this year (she’s about to give birth; he’s, well, busy buying Twitter), but Katy Perry has already teased some info about her dress (she once went as a lit-up chandelier, but said this time she’s thinking more classic), so she’s going.

Mayor Eric Adams is going, too, his press secretary said on Sunday. “While he will celebrate American fashion, he also recognizes the fraught history of the Gilded Age,” the press secretary, Fabien Levy, said by email. This was after The New York Post quoted someone it identified as a longtime friend as saying, “He’s been dying to go for years.”

The co-chairs include Regina King, Lin-Manuel Miranda, Blake Lively and Ryan Reynolds, while honorary chairs are Wintour, Tom Ford, and Adam Mosseri of Instagram, which is underwriting the party and exhibit along with Condé Nast. (As an aside, Instagram is arguably a large part of why the gala dress has gotten so exaggerated; it’s a more effective way to go viral, which is a better way for a brand and a celebrity to get attention, and thus a better marketing tool.)

Our Styles team will be live-blogging the entrances starting at 5:30, so join us to check out who shows up in what outfit in real time. And vogue.com will be streaming.

One thing to remember, if you’re taken aback by the gala in all its excess and expense (and it’s easy to be taken aback): it exists because the Costume Institute is the only curatorial department in the Met that is forced to pay for itself.

That means the Costume Institute’s expenses — for curators’ salaries, garment preservation and exhibits — do not come out of the museum’s budget, despite the fact that blockbuster exhibits such as “China Through the Looking Glass” and “Heavenly Bodies: Fashion and the Catholic Imagination” have been among the most popular in Met history, and clearly benefit the museum. It’s the party that makes them possible.

Expect showers in the early morning, with patchy fog and steady temps in the mid-50s. Late at night, there’s a chance of showers, with temps in the low 50s.

Scaring drivers into slowing down

New York City is starting a $4 million safety campaign today that is intended to induce drivers to slow down by scaring them. There are billboards and a television commercial that show a man — or a woman or a bicyclist — thrown through the air like someone who has been hit by a car.

It is part of the city’s latest effort to battle speeding, which has turned neighborhood streets into raceways.

The concern is that traffic deaths have risen to their highest level in eight years, with more drivers and passengers killed on city streets this year than last — 23, up from 13 in 2021. By contrast, pedestrian deaths have fallen to 30 this year, from 39 in 2021. In all, there were 64 traffic deaths this year through April 26, three more than in the same period last year.

The traffic deaths have reversed some of the gains of the city’s Vision Zero program, which began with a target of eliminating traffic deaths when it was announced by Mayor Bill de Blasio. Since then, the city has won state approval to lower the speed limit on most streets to 25 m.p.h., from 30 m.p.h.; built a network of nearly 2,000 automated speed cameras; and redesigned many streets to make them safer for pedestrians and cyclists.

Mayor Eric Adams, who took office in January, has promised to expand on Vision Zero efforts. He recently pledged $904 million for traffic safety over the next five years, which will include redesigning dangerous intersections and adding more protected bike lanes and pedestrian areas. He has said police officials will also increase enforcement of traffic laws.

In addition, city officials are lobbying state lawmakers for local control of city streets, which would give them authority to set speed limits, expand red light cameras and extend hours for speed cameras in school zones to nights and weekends — when the cameras are off and speeding has soared. “The city needs to be able to control its own destiny, so that we can quickly make changes that meet the current crisis,” said Ydanis Rodriguez, the city’s transportation commissioner.

The new campaign is intended to reinforce other traffic safety efforts — and change drivers’ behavior. But Erick Guerra, an associate professor of city and regional planning at the University of Pennsylvania, cautioned that there might be faster ways to slow down drivers, like installing more speed cameras.

I was walking by myself in Chelsea in the late 1980s. As I approached two construction workers on the sidewalk, I steeled myself for the possibility that they would start making provocative comments.

Just as I came alongside them, one called out in a loud and jolly voice.

“Those are the cutest socks!” he said.

It made my day.

Tags
Ci̇ty Met That Which York

How to Stop Speeding Drivers? Scare Them.

5 Things to Know About 3 Casinos That May Be Headed for N.Y.C. Area

With a ‘Special Group,’ the Mets Find Ways to Win
4 hours ago