Good morning. It’s Tuesday. Today, let’s begin with something different: We’ll celebrate the birth of the best reporter you probably think of as a landscape architect. We’ll also look at a ruling ordering former President Donald Trump to comply fully with a subpoena from the New York attorney general or face a fine of $10,000 a day. 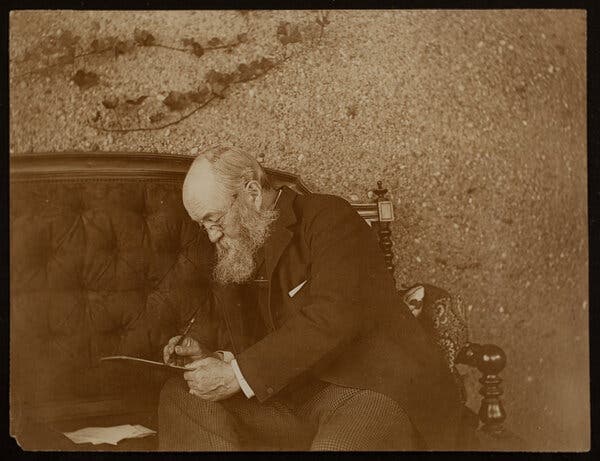 If you know the name Frederick Law Olmsted, you probably think of Central Park. He designed it, with Calvert Vaux.

If you know your Civil War history, you know that Olmsted ran an agency called the United States Sanitary Commission, which delivered medical supplies, food and clothing for wounded Union troops, sometimes faster than the Army did.

Before all that, Olmsted did something completely different. In his early 30s, he was a correspondent for a not-yet major metropolitan newspaper. This one.

But if you want to observe the 200th anniversary of his birth, which is today, don’t go to nytimes.com looking for his byline. The name that accompanied his dispatches was “Yeoman.” Like many newspapers in the 19th century, The Times used pseudonyms.

Yeoman’s dispatches in 1853 and 1854 were widely read and enduring. Half a century later, a correspondent for The Times of London said Olmsted’s work had been “more powerful and convincing than ‘Uncle Tom’s Cabin.’” Some historians call that an exaggeration, but his writing was impressive, considering that Olmsted’s claims to fame had been owning a farm on Staten Island and writing a book about his travels in England. He had no newspaper experience.

Olmsted was hired after a five-minute job interview with Henry Jarvis Raymond, who had founded The New-York Daily Times in 1851 with the banker George Jones.

Running a newspaper wasn’t Raymond’s only job. He was also the speaker of the New York State Assembly, and before long, he was nominated for lieutenant governor. He then played a significant role at the brand-new Republican Party’s first national convention in 1854. Raymond went on to draft much of President Abraham Lincoln’s re-election platform in 1864, the year Raymond became the chairman of the Republican National Convention and was elected to Congress.

Here it’s worth quoting A.M. Rosenthal, who was the managing editor of The Times when he wrote in 1971: “No, they don’t make editors like Henry J. Raymond anymore, and is that good or bad?”

An editor who doubled as an elected official? It wouldn’t happen now. “Journalists have no place on the playing fields of politics,” The Times’s handbook on ethics says — and, to its credit, The Times noted even when Raymond was in charge, the paper “was never used to promote its editor’s political fortunes.”

Raymond sent Olmsted to the South before the Civil War with instructions to send back his “personal observations,” and Olmsted did, sometimes with dense passages packed with details — too many details, Raymond complained.

Still, as John Stauffer, a cultural and literary historian at Harvard, told me, Olmsted “illuminated the South for the North.” Olmsted portrayed conditions that belied the South’s reputation for elegant affluence. “One of the things that struck Olmsted in the South was the backward nature, the lack of roads, the lack of hotels for a stranger going to interview people,” Stauffer said. The contrast with a rapidly modernizing North was inescapable.

On the job, Olmsted did not always tell the people he encountered that he was a journalist. Anne Neal Petri of the National Association for Olmsted Parks — which is overseeing Olmsted200, the bicentennial celebration — told me that Olmsted essentially worked undercover and that not saying he was representing a Northern newspaper served him. (How different was this from what a correspondent should do now? The Times’s ethics handbook says that “staff members should disclose their identity to people they cover,” although it also says they “need not always announce their status as journalists when seeking information normally available to the public.”)

Olmsted could charm people into opening up in a way they probably wouldn’t have if he had shown up with a press card.

“He was very disarming,” Stauffer told me. “He didn’t alienate people. He showed this genuine curiosity. He came across as someone who didn’t have any preconceived ideas. He was antislavery, but he didn’t say that to planters. He probably would have been kicked out” if he had.

If Olmsted’s dispatches affected his readers, his travels for The Times also affected him. Stauffer told me that Central Park was what Olmsted wished a plantation in the South could have been, a place where everyone could mingle. But, as has been widely noted, when the land for the nation’s first great municipal park was cleared, the city moved out one of its first Black settlements.

Prepare for showers in the afternoon, with temps near the mid-60s. At night, showers are likely to continue, with temps dropping to the high 40s.

“Mr. Trump: I know you take your business seriously,” Justice Arthur Engoron said, “and I take mine seriously.” Then he held Trump in contempt and banged his gavel.

It amounted to an extraordinary judicial condemnation of a tactic has Trump long used — stonewalling litigation, sometimes for years.

The origins of the inquiry. The investigation started after Michael D. Cohen, Mr. Trump’s former personal lawyer and fixer, testified to Congress that Mr. Trump and his employees had manipulated his net worth to suit his interests.

The findings. Ms. James detailed in a recent filing what she said was a pattern by the Trump Organization to inflate the value of the company’s properties in documents filed with lenders, insurers and the Internal Revenue Service.

Mr. Trump’s lawsuit. In December, Mr. Trump sued Ms. James, seeking to halt the inquiry. The suit argues that the attorney general’s involvement in the inquiry is politically motivated.

Pushing back. Lawyers for the Trump family had sought to prevent Ms. James from obtaining documents as part of the inquiry and interviewing Mr. Trump, Donald Trump Jr. and Ivanka Trump under oath. But a State Supreme Court judge in Manhattan has rejected the efforts.

Contempt ruling. In an extraordinary rebuke of the former president, a judge held Mr. Trump in contempt of court for failing to turn over documents to Ms. James. Mr. Trump was ordered to comply with a subpoena seeking records and be fined $10,000 per day until he does so.

And it came with a financial penalty: Engeron said Trump would face a fine of $10,000 a day until he turned over records covered by a subpoena from Letitia James, the New York State attorney general, who challenged the approach that Trump has used to stymie prosecutors, regulators and congressional investigators. James, a Democrat, has previously said that the Trump Organization engaged in “fraudulent or misleading” practices but that she needed to see additional records and take testimony before deciding whether to sue Trump or his company.

James issued the subpoena that figured in Engeron’s ruling in December. Lawyers for Trump argued that they found no new documents to hand over after a thorough search for the records covered by the subpoena.

But Engoron decided that Trump’s lawyers had provided a “woefully insufficient” explanation of how they had handled the search. He said they had failed to outline “what, who, where, when and how any search was conducted.” Engoron also said he felt “like there’s an 800-pound gorilla in the room” because Trump’s lawyers had not submitted an affidavit from the former president.

Alina Habba, one of Trump’s lawyers, said she would appeal Engoron’s ruling.

But it presented a roadblock for Trump as he continues to battle the attorney general. James has sought to question the former president and two of his children, Ivanka Trump and Donald Trump Jr. Lawyers for the Trump family are seeking to block the questioning. Last month Engoron sided with James, ordering depositions for Trump and the two others. The Trumps have appealed that ruling. James questioned another of Trump’s sons, Eric Trump, in the fall of 2020.

James’s civil investigation is running parallel to a criminal investigation led by Alvin Bragg, the Manhattan district attorney, which appeared to be moving toward an indictment of Trump before Bragg raised concerns about his prosecutors’ ability to prove their case.

In 1964, when I was 8, I ventured out of my family’s apartment in Riverdale nearly every day at my mother’s request.

Down the elevator and past the stairwell door, where the milk machine and the cigarette machine lurked in the dark side by side, and then on through the lobby and outside.

A right, then a left, then two blocks and a right to Mother’s bakery.

My mother said she couldn’t send my brother because he would eat half the loaf on the way home. With me, only the two heels were missing.

Tags
Had New Sai̇d That Trump

Would Your Pet Make a Good Therapy Animal?
4 hours ago

Amid a Housing Crunch, Homes Pop Up on the Fairway
5 hours ago

Davos in a Time of War
6 hours ago

It’s the Celtics’ Turn for a Romp
6 hours ago