Good evening. This is the Russia-Ukraine War Briefing, a weeknight guide to the latest news and analysis about the conflict. 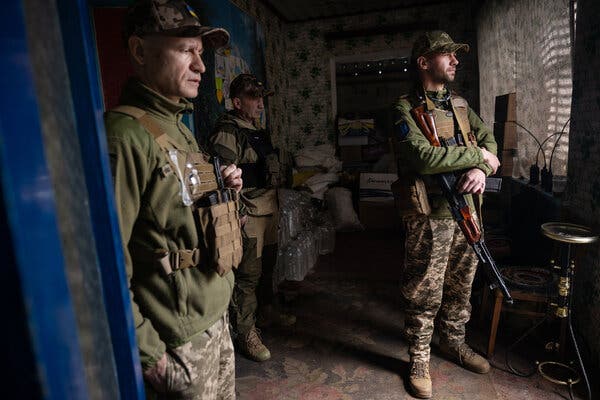 Soldiers of the 128th Brigade of the Ukrainian Army took refuge from a passing Russian surveillance drone near their position in the Zaporizhzhia region.Credit…Lynsey Addario for The New York Times

The week the war shifted

For almost all of the nine-week-old war in Ukraine, President Biden and his Western allies have warned against any attempts to frame the conflict as a direct confrontation between the U.S. and Russia.

Lloyd Austin, the U.S. defense secretary, initiated the shift on Monday, after his weekend trip to Kyiv with Antony Blinken, the secretary of state. Austin laid out a striking new U.S. goal: “We want to see Russia weakened to the degree that it can’t do the kinds of things that it has done in invading Ukraine.”

That was a major change, as my colleague David E. Sanger explained on today’s edition of The Daily: “He seemed to suggest the real goal of the United States is to degrade Russian power, and presumably Russian military power, for years to come.”

The rest of the week brought further developments suggesting that the tenor of the war has shifted:

Inside Ukraine, there are signs that the conflict has shifted to a grinding phase that could easily last for months or years.

Russia’s forces appeared to be suffering from some of the same logistical problems that led to their failure in the first phase of the war, and have not scored any major gains since they shifted their goals to conquering Ukraine’s eastern industrial heartland two weeks ago, analysts said.

They are now facing emboldened Ukrainian forces armed with heavy weapons supplied by the U.S. and NATO, and who are willing to make increasingly frequent incursions into Russian territory. Attempts to establish peace talks are at a dead end.

And though the war has shifted, it is more uncertain than ever how it will end.

JOIN US ON TELEGRAM

Follow our coverage of the war on the @nytimes channel.

Galina Ploschenko, 88, in her room at a senior care center in Hanover, Germany.Credit…Lena Mucha for The New York Times

Ukraine’s elderly Holocaust survivors are escaping war once more, embarking on a remarkable journey that upends the world they knew: They are seeking safety in Germany.

Erika Solomon, our new Berlin-based correspondent, reported on the rescue mission organized by Jewish groups around the world.

Russian oil embargo. European Union countries are likely to approve a phased embargo on Russian oil, sealing a long-postponed measure that has divided the bloc’s members and highlighted their dependence on Russian energy sources. The ambassadors expect to give their final approval by the end of the week, E.U. officials said.

Deterrence and aid. Britain’s military said it would deploy 8,000 soldiers to Europe to join troops from other NATO countries in exercises meant to deter further Russian aggression. The announcement follows President Biden’s request to Congress for $33 billion to bolster Ukraine.

On the ground. After a period of relative quiet, Russian rockets slammed into Kyiv, the capital of Ukraine. The barrage hit an empty weapons factory and a nearby apartment building, and Kyiv’s mayor said one person was found dead under the rubble.

NATO guarantees. NATO is exploring ways to defend Finland and Sweden should they ask to join the alliance, even in the period before their membership is ratified. As fears mount that the conflict might spill over the borders of Ukraine, the two countries have been moving toward requesting membership.

The effort is infused with more than a little historical irony: Not only are the Holocaust survivors being brought to Germany, but the attack is now coming from Russia — a country they saw as their liberators from the Nazis. And Russia has falsely claimed that Ukraine’s government is “pro-Nazi” and “neo-Nazi” — a puzzling assertion to make about a country whose president, Volodymyr Zelensky, is Jewish.

To date, 78 of Ukraine’s frailest Holocaust survivors, of whom there are some 10,000, have been evacuated. A single evacuation involves up to 50 people, coordinating across three continents and five countries.

For Galina Ploschenko, 88, being evacuated was not an easy decision.

“They told me Germany was my best option,” she said. “I told them, ‘I hope you’re right.’”

What else we’re following

Thanks for reading. I’ll be back on Monday — Adam

Biden seeks to lure Russia’s top scientists to the U.S.