LONDON — Ornate English and Bengali typography adorns the signs of Taj Stores, one of the oldest Bangladeshi-run supermarkets in the Brick Lane neighborhood of East London. The signs evoke a part of the area’s past, when it became known as “Banglatown,” and eventually home to the largest Bangladeshi community in Britain.

But Brick Lane’s future is looking very uncertain, said Jamal Khalique, standing inside a supermarket opened in 1936 by his great-uncle and now run by Mr. Khalique and his two brothers.

Modern office buildings of glass and steel and a cluster of apartments and cranes tower above the skyline. New coffee shops, restaurants, food markets and hotels appear in the neighborhood each year. According to one study, the borough of Tower Hamlets, which contains Brick Lane, had the most gentrification in London from 2010 to 2016.

In September, a borough committee approved plans — under discussion for five years — to build a five-story shopping mall in and around a disused parking lot beside a former brewery complex that housesindependent shops, galleries, markets, bars and restaurants.

The project would include brand-name chain stores, office spaces and a public square.

Brick Lane is widely known for its curry restaurants, though one study found 62 percent of them had closed in the past 15 years.Credit…Mary Turner for The New York Times

Like many Brick Lane residents, Mr. Khalique is ambivalent about the development. Initially, he was not opposed. “I’ve seen a hell of a change from a deprived, dirty area, to a trendy, diversified, multicultural area,” said Mr. Khalique, 50.

But now he worries that the new shopping center will undermine the area’s architectural character by adding glass features amid the weathered brick, and will siphon customers from long-established stores. “It will really kill small, independent businesses,” he said.

In a statement, Zeloof Partnership, which owns the brewery site and a handful of other nearby properties, said the new center would create several hundred jobs, mostly for local people. Its design was consistent with the look of the area and did not involve demolishing buildings, the statement said.

It added that a fixed discount for rent would be offered to a select number of independent businesses currently operating from the brewery.

The company said there was no firm date yet for when construction would start or when the new center would open.

The plans have met fierce resistance from some local residents and campaigners.

The district’s member of Parliament, Rushanara Ali of the opposition Labour Party, said residents had expressed concerns about the “limited concessions” made by the developers, adding that the Conservative government had reduced “local powers and accountability to local communities” over development.

Opponents of the development also argue that it could cause rents and housing prices to rise in what has long been a working-class area. 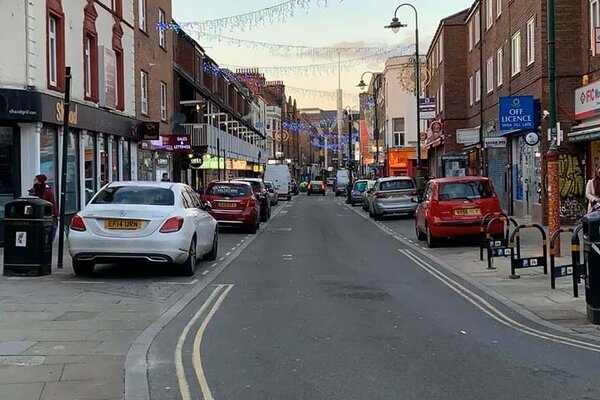 The Uncertain Fate of a London Neighborhood

Brick Lane in East London is known for its many Bangladeshi-run businesses. But in the last few years, the neighborhood has drawn notice for its rapid gentrification.

In December 2020, a “Save Brick Lane” campaign gained widespread attention online, in part through the participation of Nijjor Manush, a British Bangladeshi activist group. The borough council received more than 7,000 letters of objection, though only several hundred were from local residents, a sign of what a point of contention the proposed development had become beyond just Brick Lane.

In September last year, soon after Zeloof’s plans were approved, campaigners and residents marched in protest, unfurling “Save Brick Lane” banners behind pallbearers carrying an empty coffin to represent what they describe as the corrosive effects of gentrification.

Still, not everyone is opposed to the plans.

The neighborhood is near London’s financial district, and its horizon is increasingly filled with glass-and-steel towers. Credit…Mary Turner for The New York Times

“Brick Lane was dying a long time ago,” said Shams Uddin, 62, who arrived in the area from Bangladesh in 1976 and has been the proprietor of Monsoon, one of the many Bangladeshi-run curry restaurants that once flourished in the neighborhood, since 1999.

Indeed, in the past 15 years, 62 percent of Brick Lane’s curry restaurants have closed because of rising rent, difficulties obtaining visas for new chefs and a lack of government support, according to a study by Runnymede Trust, a research institute focusing on racial equality.

Mr. Uddin said that international travel restrictions imposed by the pandemic, the chilling effect of Brexit and the opening of franchises in a historic market area nearby had deterred customers from visiting. In this environment, he said, the new shopping center could lift up the waning businesses around it.

“When customers finish their business with the shopping center, they may come to my restaurant,” he said. “This is a good thing for our business.”

Stalls in the former brewery complex.Credit…Mary Turner for The New York Times

The changing face of Brick Lane is startling to many longtime residents who remember the many empty properties in London’s East End five decades ago.

“This area had been abandoned,” said Dan Cruickshank, a historian and member of the Spitalfields Trust, a local heritage and conservation group.

When he bought his home in Spitalfields in the 1970s — a property that had stood empty for more than 10 years — Mr. Cruickshank said he struggled to secure a mortgage. East London, he said, was “deemed dark, dangerous, remote and to be avoided” by mortgage lenders and property developers.

Now, in what Mr. Cruickshank derides as a “peculiar case of gentrification,” homes in Brick Lane have acquired a Midas touch. Average property prices in the neighborhood have tripled in little over a decade, according to real estate agents’ collations of government data, with some soaring over millions of dollars.

With the average home in London costing nearly 12 times the average salary in Britain, affordable housing options are scarce.

For centuries, Brick Lane has been a sanctuary for minority communities: Huguenot silk weavers who fled religious persecution in 17th-century France, Ashkenazi Jews escaping antisemitism and pogroms in Eastern Europe, and then Bangladeshi Muslims in the 1970s, during Bangladesh’s fight for independence from Pakistan and the ensuing violence. Since the 1990s, it has become a symbol of multicultural London, celebrated in novels, memoirs, movies and museum exhibits.

In the 1970s, Bangladeshis were drawn to Brick Lane by cheap places to live and abundant work opportunities in the textile industry.

But the arrivals were greeted by discriminatory housing policies and occasional racist violence from followers of the National Front — a far-right British political party with headquarters nearby. Racists smeared swastikas and “KKK” on some buildings. Mr. Khalique, the grocery store owner, said he was permanently scarred on his right leg when he was attacked in his youth by a dog belonging to a National Front supporter.

Hundreds of Bangladeshi families squatted in empty properties in defiance of the attacks — squatting was not then a criminal offense in England — while demanding better housing options.

Among those families was Halima Begum’s. For years, as a child, she lived in a derelict building marked for demolition until her father, a factory worker, broke into an abandoned flat close to Brick Lane. Ms. Begum lived there until she left for college.

Halima Begum, the director of the Runnymede Trust, a research institute focusing on racial equality, has witnessed Brick Lane’s transformation into what she described as a “tale of two cities.”Credit…Mary Turner for The New York Times

Now the director of Runnymede Trust, Ms. Begum has witnessed Brick Lane’s transformation into what she described as a “tale of two cities,” where wealthy workers from the neighboring financial district live in an area with what the charity Trust for London says are the capital’s highest child poverty rates.

Overcrowding is rampant in Tower Hamlets, where more than 20,000 applicants await low-income housing. Opponents of the shopping center point out that the plans do not include any social housing.

“How on earth would British Bangladeshi communities who are experiencing significant poverty be able to maintain a lifestyle where this area develops into Manhattan?” she said, citing the gentrification of the East Village in New York City in the 1980s. “The way in which we regenerate has to be more inclusive.”

Occasionally, the pushback has gone beyond petitions and local laments. A cafe specializing in hard-to-find varieties of breakfast cereal, which some held up as the ultimate example of “hipsterfication,” was vandalized in 2015 by anti-gentrification protesters. (The business closed its doors in Brick Lane in July 2020, but it continues to run a store online.)

For centuries, Brick Lane has been a sanctuary for communities seeking refuge: Huguenot silk weavers in the 17th century, Ashkenazi Jews in the 19th and 20th centuries, and Bangladeshi Muslims in the 1970s.Credit…Mary Turner for The New York Times
Aaron Mo runs a pop-up Chinese bakery, Ong Ong Buns, which opened in July near the planned development.Credit…Mary Turner for The New York Times

Aaron Mo, 39, who in July last year opened a pop-up Chinese bakery, Ong Ong Buns, near the planned development, is cautious about predicting the shopping center’s effect on small independent businesses like his.

But he said he learned something instructive when, a nearby branch of the sandwich chain Pret A Manger unexpectedly closed for two weeks last year. The effect was palpable, he said: “We got more customers.”

For Mr. Khalique, the concerns about gentrification go beyond business — they are also deeply personal.

Outside his store, Brick Lane’s history is visible in the lamp posts painted in green and red, the colors of the Bangladeshi flag, and in street signs that are in both English and Bengali.

“Our elders have fought really hard for this area,” he said of his father’s generation. “It’s in my blood.’’

The Downfall of Prince Andrew: Here’s What You Need to Know

What We Learned About Pegasus, the Smartphone Cracker

Fish Sauce Is Good for Just About Everything
2 hours ago

Fish Sauce Is Good for Just About Everything

U.K. Police Ask for Report on Boris Johnson to Withhold Details
7 hours ago