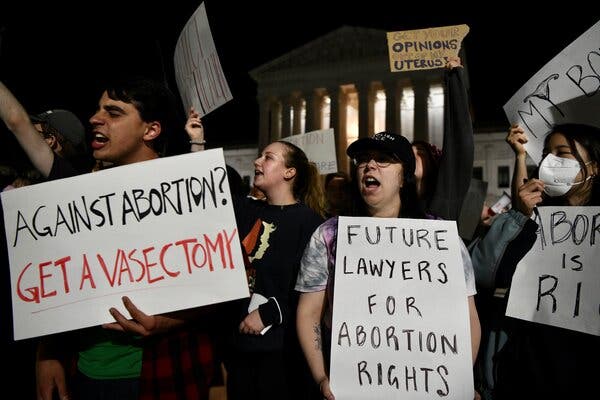 Protesters in front of the Supreme Court on Monday.Credit…Kenny Holston for The New York Times

News that the Supreme Court privately voted to strike down the landmark Roe v. Wade decision reverberated across California on Monday night, eliciting outrage from abortion rights supporters and a sudden effort from top Capitol leaders to enshrine the right to abortion in the State Constitution.

“Our daughters, sisters, mothers, and grandmothers will not be silenced,” Gov. Gavin Newsom tweeted less than an hour after Politico reported on the leaked draft opinion it obtained. “The world is about to hear their fury. California will not sit back. We are going to fight like hell.”

Late Monday night, Newsom, Speaker Anthony Rendon and Toni G. Atkins, the State Senate’s president pro tempore, proposed an amendment to California’s Constitution that would further protect abortion access in the state. Atkins said lawmakers planned to place it in front of voters in November, a move that would require supermajorities of both legislative chambers to pass it by June 30.

Abortion rights are already protected by a right to privacy in the State Constitution, but Atkins said in an interview that lawmakers “want to be very clear that the right to abortion is what we’re talking about.”

“We know we can’t trust the Supreme Court to protect reproductive rights, so California will build a firewall around this right in our State Constitution,” the lawmakers said in a joint statement. “Women will remain protected here.”

California leaders had already been positioning the state as a sanctuary for those seeking reproductive care, part of a larger effort to repulse a wave of conservative legislation from Republican-led states. The latest insight into the Supreme Court’s thinking only further fueled those efforts.

It’s unknown whether the Supreme Court will ultimately repeal the 1973 Roe ruling, as was indicated in the leaked draft opinion. Early drafts often change by the time justices officially announce their decisions. But the document was being treated Monday night as a feasible precursor to the court’s ultimate opinion.

Were Roe v. Wade to be overturned, each state’s laws would determine the right to an abortion.

California and at least 15 other states, as well as Washington, D.C., have laws on the books that would keep abortion legal, according to data from the Guttmacher Institute, a research group that supports abortion rights.

Even without an explicit constitutional amendment, access to abortion here would be unlikely to change unless a pre-emptive federal law is passed by Congress, said Erwin Chemerinsky, a constitutional law scholar and dean of the University of California, Berkeley, School of Law.

In more than 20 states without such protections, abortion would probably quickly become illegal or substantially restricted if Roe were overturned. An America without Roe is not one without any legal abortion, but one with wildly unequal access.

That has California leaders and activists thinking well beyond our state.

Jodi Hicks, the head of Planned Parenthood Affiliates of California, addressed not only Californians but also “people who may seek care here due to hostile bans in their home state” in a statement Monday night.

A reversal of Roe could drive up the number of women from out of state whose nearest abortion provider would be in California to 1.4 million from 46,000, according to Guttmacher. We previously reported that California’s Planned Parenthood clinics in 2020 treated 7,000 patients from other states.

“This is the nightmare scenario we in the reproductive health, rights and justice space have been sounding the alarm about,” Hicks said. “We will do all we can to continue to provide abortion services to all who need it or seek it here in California.”

The state has more than 160 clinics offering the procedure statewide, and activists have been making contingency plans for months in anticipation of a reversal.

Democratic lawmakers, who dominate the Legislature, have passed laws to expand abortion access and lower out-of-pocket costs for patients. Atkins, a Democrat from San Diego, is also carrying legislation authorizing experienced nurse practitioners to perform first-trimester abortions without the supervision of a physician.

A Berkeley Democrat, Nancy Skinner, has introduced a bill that would create a website for women to easily find abortion providers, and a “travel fund” to pay for the airfare, gas, lodging, meals, child care, translators and even doula support for out-of-state women seeking abortions in California.

Other bills in the pipeline create civil protections for California abortion providers who treat women from states that ban abortions.

Not all Californians are supportive. Kevin Kiley, a Republican assemblyman running for Congress near Sacramento, tweeted that the governor’s full-throated outrage was “completely irresponsible.” In a text to us, he said that Newsom’s vow to “fight like hell” was “an obvious attempt to intimidate the justices.”

But Democrats outnumber Republicans by two-to-one in California.

“I want to be explicitly clear — abortion will always be legal in #California,” Rendon tweeted on Monday. He added that “California will fight back.”

Senator Dianne Feinstein, 88, the trailblazing Democratic power broker, has served in the Senate for 30 years.Credit…Al Drago for The New York Times

In an unusual act of generosity, an anonymous donor paid $435,000 to save a community garden in Berkeley to return it to Indigenous care.

A student at U.C. Berkeley, who wants to remain anonymous, was struck by the idea of returning Ohlone land to its early inhabitants, Corrina Gould, co-director of Sogorea Te’ and chair of the Confederated Villages of Lisjan, which includes many Bay Area Ohlone tribes, told Berkeleyside. The student and her parents bought the lot and donated it to the trust.

P.S. Here’s today’s Mini Crossword, and a clue: Country that produces the most wine annually (5 letters).

Tim Arango, Jack Kramer and Mariel Wamsley contributed to California Today. You can reach the team at CAtoday@nytimes.com.

Featured Posts
More than 1 in 5 adult Covid survivors in the U.S. may develop long Covid, a C.D.C. study suggests.
28 mins ago

Inside the Chelsea Sale: Deep Pockets, Private Promises and Side Deals
1 hour ago

The commodities giant Glencore will pay $1.1 billion to settle bribery and price-fixing charges.
1 hour ago