Good morning. It’s Tuesday. We’ll look at the highway everybody loves to hate — the B.Q.E. We’ll also catch up on what the Republican candidates for governor said during their debate last night. 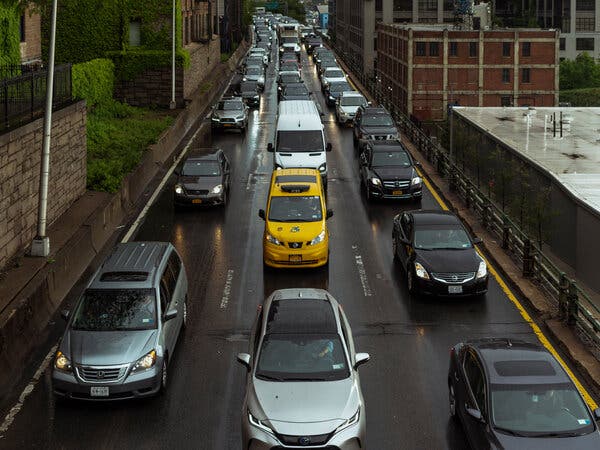 The Brooklyn-Queens Expressway, notorious for its tire-shredding potholes and endlessly snarled traffic, is decaying. Too many too-heavy trucks have worn down the road surface. Road salt, snow and rain have eaten away at the concrete-and-steel foundation underneath.

You’ve probably read about this before. In the last six years or so, at least a half-dozen plans have been floated to fix the B.Q.E., as the highway is known.

Now Mayor Eric Adams wants to jump start repairing or rebuilding the B.Q.E. He is effectively setting a deadline to start construction within five years. He wants the work to follow a plan that has yet to be developed.

“Our moment is right now,” he said in a statement. “I will not wait decades and needlessly spend hundreds of millions of additional taxpayer dollars when we can and must start rebuilding this vital transportation artery today.”

His mention of money apparently referred to a plan announced last year by his predecessor, Bill de Blasio. The idea was to undertake a relatively temporary fix, as such things go — shoring up the B.Q.E. for 20 years while the city figured out a permanent solution at a cost of more than $500 million.

Elements of the de Blasio plan have now been put on hold, and city officials said that Adams is in “active discussions” with state officials to overhaul the entire 18-mile highway, not just the 1.5-mile section that the city controls and that de Blasio was looking to rehabilitate. Adams said that fast-tracking a full-scale plan to “reimagine and rebuild the B.Q.E.” would let the city draw on billions in federal infrastructure money. “We have a once-in-a-generation opportunity,” he said, adding that “we are seizing it.”

That may be easier than when de Blasio was mayor and Andrew Cuomo was governor. In contrast to the hostility that defined their relationship, Adams appears to get along well with Gov. Kathy Hochul, who replaced Cuomo when he resigned last summer.

Still, my colleague Winnie Hu writes that some elected officials and community leaders doubt that five years is enough time for the city to push through a plan. And five years would be up the year after the next election for mayor.

“There are no easy solutions — if there were, we would have done it many years ago,” said Lincoln Restler, a City Council member from Brooklyn who has criticized the Adams administration for not carrying out repairs aggressively. “This has been kicked down the road because it is so hard.”

City officials warned in 2016 that if the B.Q.E. did not get attention, trucks would have to be restricted by 2026. To deal with faster-than-expected deterioration brought on by trucks that apparently exceeded the prescribed 80,000-ton weight limit, the de Blasio panel recommended closing two of six lanes on a half-mile stretch of the B.Q.E. That was done last summer.

That was three years after city officials presented two options to rebuild the B.Q.E. — options that were rejected by critics, including Adams, then the Brooklyn borough president. One option was to close the Brooklyn Heights promenade for as long as six years and build a temporary roadway above it to carry traffic while the long-term work went on below.

Later the City Council weighed in with an $11 billion plan to tear down the highway and replace it with a three-mile-long tunnel.

Samuel Schwartz, a transportation engineer who was an official in the city’s Department of Transportation for nearly 20 years, predicted that there would be no consensus on how to proceed. He suggested that Adams and Hochul simply set a deadline to come up with a new plan — and then move ahead despite almost-certain opposition.

“If they’re willing to commit to a decision one year from now,” he said, “then it’s a good plan.”

Enjoy a partly sunny day near the low 80s. The evening is mostly clear with temperatures around the high 60s.

In effect until June 20 (Juneteenth).

Living in the city

In Republican debate, attacks and counterattacks

The attacks began early in Monday’s debate among Republican contenders for governor of New York. Representative Lee Zeldin assailed Harry Wilson, a corporate turnaround specialist who worked in the Obama administration, as a “never Trumper.” He referred to Rob Astorino, the former Westchester County executive, as “Rolex Rob.”

Wilson countered that Zeldin was “a broken candidate” and “a Cuomo clone,” referring to former Gov. Andrew Cuomo, a Democrat. Zeldin, who was a state senator for four years before he was elected to Congress in 2014, replied that “the Cuomo attack is ridiculous.”

The fourth candidate in the race, Andrew Giuliani, joined in remotely — he was not in the studio with the others at the CBS Broadcast Center, where only vaccinated people are permitted to enter.

For an hour, they sparred on topics from gun control to abortion to their respect for President Donald J. Trump. My colleague Jesse McKinley writes that they sought to polish their conservative credentials as the June 28 primary approaches. They also did their best to differentiate themselves from their Democratic counterparts, especially Gov. Kathy Hochul, who is considered a favorite in her party’s primary.

With a Supreme Court decision expected soon that could overturn the 49-year-old Roe v. Wade ruling, none of the four called directly for Roe to be overturned, though several said there should be restrictions on who can perform abortions and when women can seek them. Wilson, the only candidate in the race who supports abortion rights, said he was “not running on a social platform,” while Astorino said that abortion remained a “really difficult choice” for women.

The debate also took place against the backdrop of the hearings by the House committee investigating the Jan. 6 assault on the Capitol. Giuliani, the son of the former Mayor Rudolph Giuliani, said he was “very honored” to have worked in the Trump White House and called Trump “a great president” and “a good friend.” He said he hoped Trump would run again.

Zeldin has been a Trump stalwart and voted to overturn the results of the 2020 election. “If President Trump wants to run,” Zeldin said, “he should run, and I think he’ll win.”

Astorino, who was the G.O.P.’s nominee for governor in 2014 and lost to Cuomo, called Jan. 6 “a horrible day in our nation’s history” and said that Trump “bears some responsibility” for the attack. “But I think most people would say we’ve got to move on now,” he added, calling the congressional hearings “complete political theater.”

I was on an uptown No. 1 in November 2013 when an older woman got on at 34th Street. I offered her my seat, and she graciously accepted.

At 66th Street, she rose to get off and began to walk past me.

“I’m in the orchestra,” she replied.

I was on my way to that night’s performance, and we walked together toward Lincoln Center.

“I play the glass harmonica, an instrument invented by Benjamin Franklin,” she said.

As we parted, I said I would try to come down to the orchestra pit and get a look at her instrument. Then I went off to meet my granddaughter Amanda.

We had plenty of time before the performance, so we walked down to the front, peered into the pit and spotted my subway companion.

She looked up at us and smiled.

“Oh,” Amanda said, “a glass harmonica! That was invented by Benjamin Franklin.”

I turned to her and stared.

Last October, I read an obituary for Cecilia Brauer, 97 and a Metropolitan Opera Orchestra member, and recalled the time we met.

Tags
Plan Sai̇d That Trump Who

Biden Trip to Saudi Arabia Is Set, but Energy Help Is Not

Featured Posts
MAGA Voters Send a $50 Million G.O.P. Plan Off the Rails in Illinois
38 mins ago