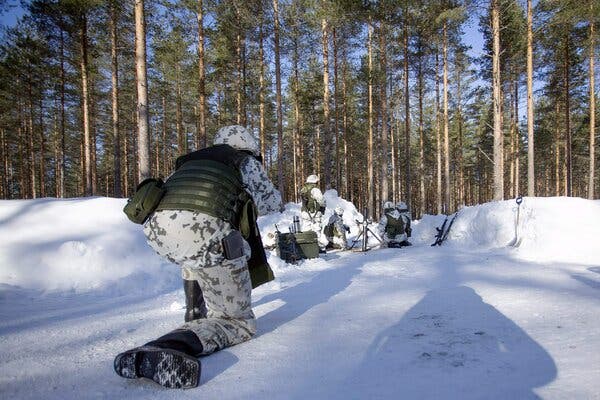 Members of a Finnish Army brigade during exercises this year in Taipalsaari, close to the southeastern border with Russia.Credit…Lauri Heino/Lehtikuva, via Agence France-Presse — Getty Images

Finland yesterday declared its unequivocal intention to join NATO, placing the alliance’s newest prospective member on Russia’s northern doorstep. The declaration could reshape a strategic balance in Europe that has prevailed for decades, especially if Sweden follows suit, as it is expected to do.

The news was a blow to Vladimir Putin, the Russian president, who has said that stopping NATO’s expansion helped drive him to invade Ukraine. Russia said it would take “retaliatory steps,” including a “military-technical” response, which many experts interpreted as a threat to deploy tactical nuclear weapons near the Russian-Finnish border.

The addition of Finland and Sweden to NATO increases the likelihood of a war between Russia and the West, under the alliance’s underlying principle that an attack on one is an attack on all. Finland’s leaders said that “NATO membership would strengthen Finland’s security,’’ adding that “as a member of NATO, Finland would strengthen the entire defense alliance.”

Ukraine: What does Finland’s decision to join NATO mean for the democracy at the heart of the current conflict, which has its own ambitions to join the alliance?

The first factory in Africa licensed to produce Covid-19 vaccines for the African market has not received a single order and may shut down that production line if there are no orders in the next six weeks, according to executives at the factory’s company, Aspen Pharmacare.

The factory, in Gqeberha, South Africa, first announced a deal to start manufacturing Johnson & Johnson’s Covid vaccines in November 2021. But as the slow distribution of vaccines in Africa has left health agencies with a backlog of supplies, purchasers have not appeared, and commercial production has never started.

Cyril Ramaphosa, the South African president, blamed “international agencies” for failing to buy vaccines from a pioneering African manufacturer. “This immediately just devalues the whole process of local manufacturing and local production of vaccines,” he said.

By the numbers: Less than 20 percent of the population of Africa is fully vaccinated against the coronavirus. As of Wednesday, new reported cases in South Africa have increased 80 percent from the average two weeks ago, and deaths have increased 44 percent.

In other pandemic news:

Credit…Prices are through 6 p.m. Eastern time on May 12.Source: CoinMarketCap; The New York Times

Amid fear and panic, a cryptocurrency meltdown

The cryptocurrency world went into a full meltdown this week in a sell-off that vividly illustrated the risks of experimental and unregulated digital currencies, with the price of Bitcoin plunging to its lowest point since 2020. More than $300 billion has been wiped out by the crash in crypto prices since Monday.

It was the worst reset in cryptocurrencies since Bitcoin plummeted 80 percent in 2018. But this time, the falling prices are having a broader impact because more people and institutions hold the currencies. Critics said the collapse was long overdue, while some traders compared the alarm and fear to the start of the 2008 financial crisis.

The rapid declines have been especially acute for investors who bought cryptocurrencies when prices surged last year. Sixteen percent of Americans now own some virtual currencies, up from 1 percent in 2015. Cryptocurrency prices have typically rebounded from major losses, though in some cases they took years to recover.

Context: While the S&P 500 is down 18 percent so far this year, Bitcoin’s price has dropped 40 percent in the same period. In the past five days alone, Bitcoin has tumbled 20 percent, compared with a 5 percent decline in the S&P 500.

The Event Horizon Telescope has once again caught sight of the “unseeable”: the black hole at the center of the Milky Way.

Prepandemic, no one wanted strangers at a wedding, scarfing free food or seeking hot dates. But Covid has made it tougher to predict if guests will show up, especially in a year with a record number of nuptials, leaving some guests simply overbooked. And once pricey wedding venues are reserved, they don’t tend to give refunds.

To fill awkwardly empty tables and find homes for uneaten meals, some couples are taking unusual measures. A Las Vegas couple with a guest deficit posted an open invitation in a local Facebook group and wound up making new friends. A Rhode Island couple are also planning to seek guests on Facebook, if enough attendees can’t make their wedding.

“I don’t mind,” the future bride said. “I love meeting people. And I grew up watching ‘Wedding Crashers.’”

Still, there are potential pitfalls. A retired deputy sheriff in Arizona was charged this week with burglary for his role as a “wedding crasher bandit,” turning up neatly dressed but uninvited to 11 weddings, where he stole cash and checks from envelopes given to the newlyweds, the authorities said.

These traditionally chewy, crusty bagels are an ideal weekend project.

In “What Artists Wear,” the British journalist and curator Charlie Porter considers the wardrobes of Louise Bourgeois, Jean-Michel Basquiat and other greats.

P.S. Jonathan Wolfe, the lead writer of the Coronavirus Briefing, is expanding his role to work across The Times’s newsletters portfolio.

The latest episode of “The Daily” is about inflation in the U.S.

Tags
Africa Nato Sai̇d That This

A Rabbi’s Contentious Quest for Religious Pluralism in Israel

An Iranian Artist Focuses on Gardens Under Siege

In Bucha, a Symbol of Death and Atrocity, Life Returns

Why Salmon and Rice Go So Well Together
32 mins ago

Congress Is Paralyzed on Guns. Here’s Why Chris Murphy Is Still Hopeful.
56 mins ago