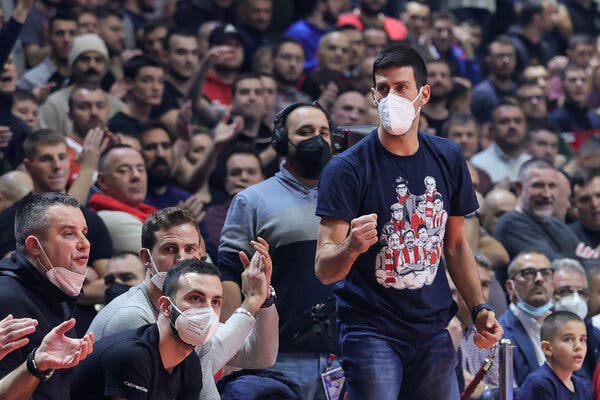 Novak Djokovic is in quarantine in Australia, awaiting a hearing on his appeal of the government’s decision.Credit…Srdjan Stevanovic/Euroleague Basketball via Getty Images

A hearing on Monday will determine whether Novak Djokovic can defend his men’s singles title at the Australian Open this month. Border officials said they denied him entry because he had not provided evidence to justify being exempted from the country’s Covid vaccination requirement for all arrivals.

Djokovic’s lawyers are appealing Australia’s decision. The Serbian tennis superstar, a skeptic of vaccines, says he tested positive in mid-December. His lawyers say he had been granted a vaccine exemption because of the test result, and that the country erred in canceling his visa.

If Djokovic’s appeal fails, he could be barred from entering Australia for three years, under rules governing visa cancellations.

Refugees: Djokovic isquarantining in a Melbourne hotel where about 30 asylum seekers have been held for over a year, drawing attention to Australia’s much-criticized detention policy.

Tennis: Athletes once viewed favorably as iconoclasts are now encountering pushback when they want to play by different virus rules than everyone else.

The protests, initially peaceful, began last weekend over a hike in fuel prices and spread across the country. They set off a political crisis and prompted Kazakhstan’s president to seek help from a Russia-led security alliance to restore order. That move could realign politics and power in Central Asia for years to come.

Now, people are wondering if the street violence has stood in as a proxy for feuding factions of the political elite, after Karim Masimov, the former head of Kazakhstan’s powerful intelligence agency and a key ally of the former president, was arrested on suspicion of treason.

Analysis: The tension comes after Nursultan Nazarbayev, Kazakhstan’s leader since its founding, began gradually handing power to a successor in 2019. Chaos typically follows autocratic leaders on their way out, our columnist writes.

Ukraine updates: Russian forces now surround Ukraine on three sides, and Western officials fear a military operation could start as soon as this month. The U.S. and NATO will begin talks with Russia on Monday to try to forestall an invasion — perhaps with tight sanctions. Ukraine, left out of the talks, is quietly pursuing separate negotiations with Moscow.

Princess Basmah bint Saud in Washington during a discussion in 2017 about the role of women in the Middle East. Credit…Mandel Ngan/Agence France-Presse — Getty Images

A Saudi princess freed from jail

The Saudi government has not said why it detained Princess Basmah bint Saud, a daughter of a former king who has been a critic of the country’s policies and legal system — and of its crown prince, though not by name. Officials did not say why they released her from jail after three years, either.

The 58-year-old princess returned home with her daughter Suhoud al-Sharif, who was imprisoned with her, a legal adviser to her family said. The two women had been accused of undefined “criminal offenses” but were never formally charged.

It remained unclear whether they would be allowed to travel abroad. That’s a pressing issue: Princess Basmah needs medical care not available in the kingdom, her legal adviser said.

Context: Princess Basmah was among a number of prominent dissidents, women’s rights activists and members of the Saudi royal family either jailed or put under house arrest during the rise of Crown Prince Mohammed bin Salman. Many are still detained.

Asia and the Pacific

A vehicle stranded on a snow-covered road in Pakistan.Credit…Rahmat Gul/Associated Press

Dr. Sheha Pfizer, center, danced at her colorful wedding in Kerala, which incorporated influences from around India and beyond.Credit…Anindito Mukherjee for The New York Times

Couples in the south of India are hosting increasingly elaborate weddings, often tailored to get clicks on social media. By one estimate, more than 60 percent of celebrations in the coastal state of Kerala now include choreographed performances, riffing on trends that blur the nation’s religious and cultural lines.

Sidney Poitier was Hollywood’s first Black matinee idol, and the first Black performer to win the Academy Award for best actor in the 1963 film “Lilies of the Field.” He died on Friday at 94.

Poitier rose to prominence during the civil rights movement in the U.S., and his roles tended to reflect the struggle’s peaceful, integrationist goals, a conscious choice by Poitier. His characters met hatred with reason and forgiveness. They simmered with repressed anger, but responded to injustice with quiet determination.

The message reassured white audiences but exposed him to attacks from Black activists when the movement took a more militant turn in the late 1960s and 1970s. Poitier once said he felt “as if I were representing 15, 18 million people with every move I made.”

“Movie after movie insisted he be the Black man for white America,” Wesley Morris, our critic at large, writes in an appraisal of Poitier’s legacy, adding, “He was summoned to symbolize Black America, single-handedly.” Here’s where to stream some of Poitier’s great performances.

In “Aftermath: Life in the Fallout of the Third Reich, 1945-1955,” the journalist Harald Jähner analyzes Germany’s national myths and moods after the war. “They saw themselves as the victims,” he writes, “and thus had the dubious good fortune of not having to think about the real ones.”

What to Listen to

Our critics recommend new songs by a Radiohead spinoff, Burial, Delaney Bailey and others.

Here are tips to make your running resolution stick in the new year.

That’s it for today’s briefing. See you next time. — Amelia

P.S. The Times’s international climate correspondent Somini Sengupta talked about covering the human toll of climate change, particularly on the most vulnerable populations.

The latest episode of “The Daily” is about the state of American democracy.

You can reach Amelia and the team at briefing@nytimes.com.

The Week in Business: Vaccine Mandates

Can I Reveal a Colleague’s Covid Diagnosis?
30 mins ago

How to Get Through a Power Outage
54 mins ago