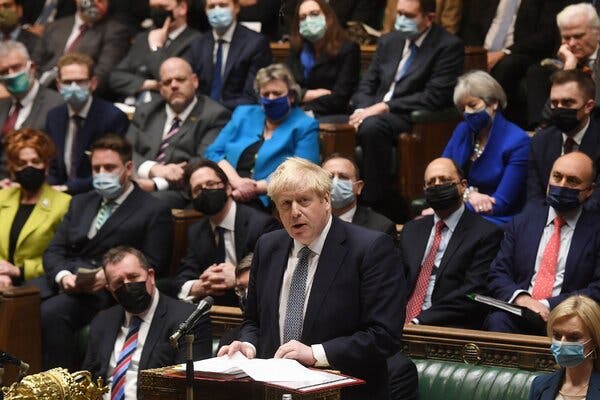 Boris Johnson, the British prime minister, is under growing pressure to resign after a public backlash over a Downing Street garden party he attended last year while his country was under a strict coronavirus lockdown. Johnson, who had not previously admitted to being at the event, offered a contrite apology to fellow Britons during Prime Minister’s Questions yesterday.

“I want to apologize,” he said. “I know the rage they feel with me and with the government I lead, when they think in Downing Street itself the rules are not being properly followed by the people who make the rules.” He insisted that he had thought the gathering was a work event that did not breach government regulations — a claim that provoked incredulity among critics.

Top officials of the opposition Labour Party were scathing as they called for his resignation. “The party is over, prime minister,” Labour’s leader, Keir Starmer, declared. “The only question is: ‘Will the British public kick him out? Will his party kick him out? Or will he do the decent thing and resign?’” Conservative backbenchers now fear a public backlash, and an internal investigation is ongoing.

Backlash: Roger Gale, a Conservative lawmaker and a vocal critic of Johnson’s, told the BBC that the prime minister had misled Parliament and was “politically a dead man walking.” The leader of the Scottish Conservatives, Douglas Ross, also called on Johnson to stand aside.

China’s “zero Covid” policy, which involves efforts to eliminate the virus from the country altogether, is carried out by millions of people who work diligently toward that goal, even at the expense of people’s lives, well-being and dignity.

China’s early authoritarian policies to combat the coronavirus seem to have emboldened officials. Many now believe that they must do everything within their power to ensure zero Covid infections, since it is the will of their top leader, Xi Jinping. In some cases, their actions have had tragic consequences, with people being denied health care or being beaten for seeking food.

These tensions play out online, as zealous nationalists spar with Chinese citizens who question how those enforcing the quarantine rules can behave in such a manner and ask who holds ultimate responsibility. Some have invoked the phrase “the banality of evil” in the discussions, an expression coined by the philosopher Hannah Arendt in her writings on the Holocaust.

Xi’an: A strict lockdown in the northwestern Chinese city that began in December created chaos and crisis after the local government opted not to provide food, medical care and other necessities to the city’s 13 million residents.

Olympics: The Winter Olympics are just three weeks away, but tickets have yet to go on sale. It will be the most extraordinarily restricted large sporting event since the start of the pandemic.

Kevin McCarthy, the House minority leader, has refused to cooperate with a formal request for an interview with the select committee scrutinizing the Jan. 6 attack on the Capitol. On the day itself, McCarthy was in close contact with Donald Trump before, during and after the violence. He has fought to shut down any investigation of the events.

The request sent a clear message that the committee’s investigators are willing to pursue the highest-ranking figures on Capitol Hill for information about the former president’s mind-set as the violence unfolded. McCarthy, a California Republican, is on track to become the speaker of the House if Republicans retake the chamber in November.

In a statement, McCarthy condemned the investigation as “illegitimate.” He has led his party’s opposition to the formation of a bipartisan panel as initially conceived to investigate the riot, has opposed the creation of the current committee and has attacked the panel’s work for weeks.

Grounds: Bennie Thompson, the chairman of the committee, said the panel had obtained “contemporaneous text messages from multiple witnesses” that refer to White House staff members as expressing “significant concerns” about Trump’s “state of mind and his ongoing conduct” in the days after Jan. 6.

For people over 70, sex can drop off, even in relationships that are otherwise warm and high functioning. But for those who keep going, it can be the best of their lives.

Ronnie Spector, the lead singer of the 1960s pop group the Ronettes on hits like “Be My Baby,” has died at 78.

A movie on climate change strikes a nerve

“Don’t Look Up” is one of Netflix’s most popular films ever. After it premiered in December, climate scientists took to social media and penned opinion essays, saying they felt seen at last.

In the movie, a planet-killing comet serves as a metaphor for the climate crisis. A team of scientists, frantically pushing for government action but ignored because of politics, profiteering and apathy, stands in for climate scientists who are pushing for cuts to emissions.

Adam McKay, the director, wants the film to be “a kick in the pants” that prompts urgent climate action. Netflix worked with climate scientists to share ways to take action, and cast members have pointed to climate legislation voters can support.

“I’m under no illusions that one film will be the cure to the climate crisis,” McKay, whose previous films include “The Big Short” and “Vice,” told The Times. “But if it inspires conversation, critical thinking, and makes people less tolerant of inaction from their leaders, then I’d say we accomplished our goal.”

This quick-braised chicken with greens gets its bite from hot pickled peppers and their brine.

Melatonin isn’t a sleeping pill. Here’s how to use it.

“Parallel Mothers,” the seventh film by Pedro Almodóvar that stars Penélope Cruz, is one of their greatest together. Cruz says making the film was the hardest thing she had ever done.

Here’s today’s Mini Crossword, and a clue: What mosquitoes and vampires do (four letters).

The latest episode of “The Daily” is about Russia and Ukraine.

Melina Delkic wrote today’s Arts and Ideas. You can reach Natasha and the team at briefing@nytimes.com.

Tags
Climate Had That Who Will

N.F.L. Playoff Predictions: Our Picks in the Wild-Card Round

A Historic Verdict, and a New Front in the Global Fight for Human Rights

Israeli experts recommend offering a fourth vaccine dose to people age 18 and over.
36 mins ago

With Some Voters ‘Ready to Move On,’ Democrats Search for New Message on Virus
2 hours ago

With Some Voters ‘Ready to Move On,’ Democrats Search for New Message on Virus