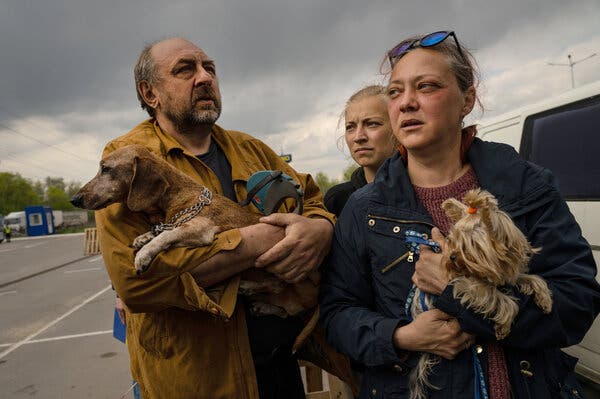 Yelena Safonova, right, with her husband, Sergey, and their daughter, Ksenia, after fleeing from Mariupol to Zaporizhzhia.Credit…Lynsey Addario for The New York Times

Stories of pain and despair from Mariupol

More than 120 civilians from Mariupol, Ukraine, have made their way to safety so far in an evacuation overseen by the Red Cross and the U.N. After their rescue, they described scenes of survival and terror, saying they had subsisted on Russian rations cooked outside on wood fires amid daily shelling that left corpses lying in debris. Follow the latest updates from the war.

Despite early morning shelling, the halting evacuation was seen as the best and possibly last hope for hundreds of civilians who have been trapped for weeks in bunkers beneath the wreckage of the Azovstal steel plant. Residents were “starting to talk of suicide because they’re stuck in this situation,” one evacuee said.

The evacuation came as Western nations worked to turn their increasingly expansive promises of aid into action, preparing billions of dollars in military and economic assistance, an oil embargo and other once-unthinkable steps. Nancy Pelosi, the speaker of the U.S. House, called for the “strongest possible military response, the strongest sanctions” to punish Russia for the invasion.

Fighting: Military action in the eastern Donetsk and Luhansk regions has yielded minimal gains for Russian forces, which continue to struggle to capture and hold territory, Western officials say.

Goals: The U.S. State Department said that Russia was aiming to annex Donetsk and Luhansk, which were partly controlled before the Feb. 24 invasion by Russia-backed separatists, as soon as mid-May, and possibly the southern Kherson region, as well.

Abortion has long split the two U.S. parties, and the country.Credit…Leigh Vogel for The New York Times

A draft of a vote to overturn U.S. abortion rights

The Supreme Court privately voted to strike down the landmark Roe v. Wade decision that has guaranteed the right to abortion for nearly a half-century, according to a leaked draft opinion written by Justice Samuel Alito and published last night by Politico.

Alito called the case wrongly decided, according to the report, and said the contentious issue, which has animated political debates in the U.S. for more than a generation, should be decided by politicians, not the courts. “It is time to heed the Constitution and return the issue of abortion to the people’s elected representatives,” he writes.

In the draft opinion, a majority of the court voted to overturn Roe, with Clarence Thomas, Neil Gorsuch, Brett Kavanaugh and Amy Coney Barrett voting to support Alito’s opinion. Stephen Breyer, Sonia Sotomayor and Elena Kagan were reported to be working on dissents. It was not clear how John Roberts, the chief justice, planned to vote.

Context: The leak of the 98-page document is unprecedented in modern times. In the court’s modern history, early drafts of opinions have virtually never leaked before a decision is announced. Any decision along the lines of the draft would be a seismic change in American law and politics.

Spain’s prime minister, Pedro Sánchez, during a round table meeting at an E.U. summit in Brussels in July 2020.Credit…Pool photo by John Thys

The revelations broadened a scandal over political spying in the country, after a cybersecurity watchdog organization found last month that Pegasus had been installed on the devices of dozens of politicians from the pro-independence government of Catalonia. Pere Aragonès, the region’s leader, denounced the hacking as “mass espionage.”

Developed by NSO Group, an Israeli company, Pegasus allows users to monitor every aspect of a target’s phone, including calls, messages, photos and videos. The software is a sophisticated and robust surveillance tool that has been used by governments worldwide to hunt down criminals, terrorists and drug traffickers — as well as to track dissidents and activists.

Details: Sánchez and Robles had their phones surveilled by the Pegasus spyware about a year ago, said Félix Bolaños, a minister in the Spanish government. The Spanish authorities were trying to determine whether other ministers and senior officials had been targeted, he added.

Why were Bolivian river dolphins swimming around with a large anaconda in their mouths? Whatever is behind this animal encounter, it’s not the stuff of children’s storybooks.

Glitz and glitter at the Met Gala

Yesterday was the first Monday in May, the traditional date of the Met Gala. Officially, the event is a black-tie fund-raiser for the Metropolitan Museum’s Costume Institute. Unofficially, the gala is the Super Bowl of fashion, where famous people attempt to outdo each other on the red carpet. See highlights from the evening.

If it feels as if the last Met Gala was only yesterday, that’s because 2021’s edition was held in September (blame the pandemic). That event unveiled Part 1 of an exhibition on American fashion at the costume institute. This year’s gala — co-hosted by Regina King, Lin-Manuel Miranda, Blake Lively and Ryan Reynolds, and with a theme of “gilded glamour” — opens Part 2 of the show.

Is the Met Gala a costume party? “Only insofar as fashion is the costume we all wear in everyday life,” writes Vanessa Friedman, The Times’s chief fashion critic. But the gala presents some of the most extreme versions of that costume. And because the designers who attend almost always bring celebrities as guests, dressed in their brand’s clothes, the attendees become walking advertisements for the designer, as well as the event.

The French-language film “Vortex,” from the director Gaspar Noé, chronicles the decline of an older couple in remorseless, mesmerizing detail.

“Companion Piece,” a remarkable new novel by Ali Smith, is set in a pandemic-ravaged, post-Brexit Britain.

P.S. Astead Herndon, a political reporter and regular guest host of “The Daily,” will lead a new politics show.

The latest episode of “The Daily” is on the revival of union membership in the U.S.

Tags
Gala Had New That Ti̇me

What Would the End of Roe Mean? Key Questions and Answers.

Featured Posts
More than 1 in 5 adult Covid survivors in the U.S. may develop long Covid, a C.D.C. study suggests.
6 mins ago

Inside the Chelsea Sale: Deep Pockets, Private Promises and Side Deals
42 mins ago

The commodities giant Glencore will pay $1.1 billion to settle bribery and price-fixing charges.
54 mins ago