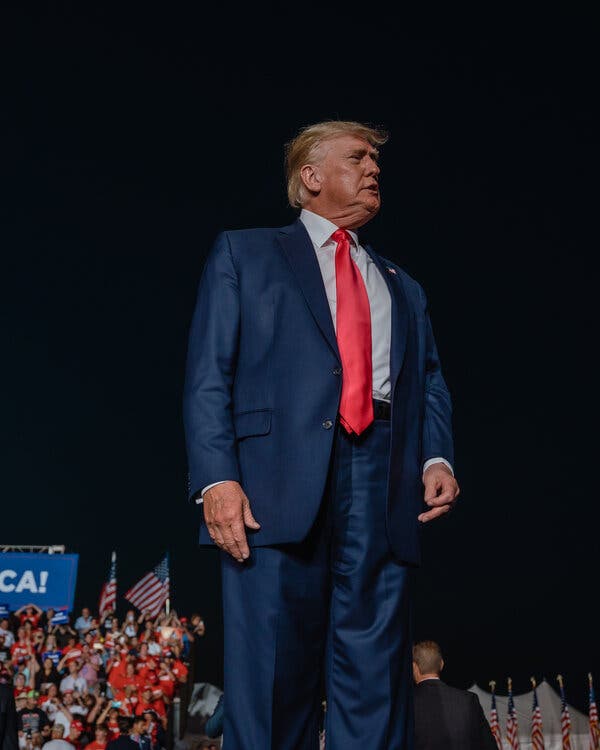 Donald Trump’s family real estate business was convicted yesterday of 17 counts of financial crimes, including tax fraud, in a remarkable rebuke of the former president’s company and what prosecutors described as its “culture of fraud and deception.”

The conviction, which came after more than a day of jury deliberations in the New York State Supreme Court in Manhattan, resulted from a long-running scheme in which the Trump Organization doled out off-the-books luxury perks, such as fancy apartments and luxury cars, to some executives. Though the maximum penalty the company faces is $1.62 million — hardly a financial death knell — it is a highly public reckoning for the Trump Organization.

While prosecutors stopped short of indicting the former president, they invoked his name throughout the monthlong trial, telling jurors that he had personally paid for some of the perks and had even approved a crucial aspect of the scheme.

Fallout: The company’s conviction — coupled with the prosecution’s claim that Trump was “explicitly sanctioning tax fraud” — could reverberate through the 2024 presidential race and might lay the groundwork for a wider criminal investigation into Trump’s business practices.

The aftermath of a missile attack at a school in the village of Malotaranivka. Several locations around Kramatorsk were hit yesterday afternoon.Credit…Tyler Hicks/The New York Times

After nine months of Russian bombardment of its towns and cities, Ukraine has struck Russia three times in two days, signaling a bolder phase of Ukrainian attacks enabled by longer-range weapons and unconstrained by fear of reprisal. Ukraine can now reach deep into Russia and can theoretically hit Moscow if it chooses.

Ukraine struck air bases 300 miles from the nearest Ukrainian territory, demonstrating the ability to evade Russian air defenses and hit with precision. Both the Russian government and a senior Ukrainian official, who spoke on the condition of anonymity, said the strikes had been carried out by Ukraine using drones.

Ukraine’s government has not publicly taken responsibility for the strikes. But there is a widespread sense among officials and civilians that, short of nuclear escalation, there is little more Russia can do to Ukraine in retaliation that it is not already doing, with its waves of strikes on the country’s energy grid and other infrastructure.

Details: Russia’s Ministry of Defense said the strikes had used Soviet-era, jet-powered drones. Arms experts said the particular aircraft was probably the Tupolev TU-141 Strizh, a surveillance drone first developed by the Soviet Union in the 1970s that analysts say can fly at 600 miles per hour at low altitudes.

A U.S. federal court dismissed a lawsuit against Crown Prince Mohammed bin Salman of Saudi Arabia over the murder of the Saudi journalist and dissident Jamal Khashoggi after the State Department determined that the prince had immunity as a head of state or government. Khashoggi was killed while visiting Saudi Arabia’s consulate in Istanbul in 2018.

In September, Prince Mohammed’s father, King Salman, made the prince the prime minister of Saudi Arabia. The move formalized his role as ruler of the kingdom, though the king remains the head of state. Some U.S. officials and analysts said the king appeared to have made the decision to ensure that the prince would have immunity in the case.

The State Department asked the court for an extension to make a legal determination, and it then filed a statement with the Justice Department on Nov. 17 that said that Prince Mohammed should be “immune while in office.” The letter said the State Department was not taking a position on the suit itself and repeated “its unequivocal condemnation of the heinous murder.”

Details: In the filing, the court said, “Despite the court’s uneasiness, then, with both the circumstances of bin Salman’s appointment and the credible allegations of his involvement in Khashoggi’s murder, the United States has informed the court that he is immune, and bin Salman is therefore ‘entitled to head of state immunity.’”

An American teenager, Hans Niemann, defeated Magnus Carlsen, the world’s best chess player. Carlsen then accused his opponent of cheating. Is it overdue justice or paranoia?

“Here’s the caveat: I really don’t like Hans at all, and I’ve not liked him for a long time,” said one grandmaster. “But obviously the truth is more important than whether you like someone.”

SPORTS NEWS FROM THE ATHLETIC

Whatever Messi does, Ronaldo does too: The absurd timeline of how the superstars have driven each other to break records.

The teenage prodigy taking the World Cup by storm: England has had tournament prodigies before, but Jude Bellingham feels different — he’s built for the biggest stage.

Morocco stuns Spain: Achraf Hakimi sent his team to the World Cup quarterfinals for the first time with an ice-cold Panenka to end the penalty shootout. Morocco will face Portugal, which ousted Switzerland with Ronaldo coming off the bench — his replacement scored a hat trick.

Holiday music has long been a big business. In 2018, Billboard estimated it to be worth $177 million a year in the U.S. alone. But streaming has supercharged it.

In the week leading up to Christmas last year, holiday songs accounted for 10 percent of all music streams in the U.S. And on Christmas Eve, Amazon’s Alexa smart speakers received 35 million voice requests around the world for seasonal music.

David Foster, a golden-touch producer who has worked on hit holiday albums, shared three rules of the Christmas music game:

Foster stressed the importance of the first rule, noting that violating it could sink any holiday album. “In general, people want to hear the old songs,” he said. “They don’t want to hear a songwriter like me write a song about sitting by the fireplace, Santa’s coming down the chimney, there’s snow outside …”

In “Willow,” Warwick Davis revives his role from the swashbuckling 1988 comedy-adventure movie.

Here’s what parents need to know about influenza — and how to recognize when things turn serious.

Here’s today’s Mini Crossword, and a clue: “Hey you, over here!” (four letters).

And here are today’s Wordle and the Spelling Bee.

That’s it for today’s briefing. See you tomorrow. — Natasha

“The Daily” is on the Georgia Senate race.

Tags
Russia State That Was With

Would You Have Four Kids if It Meant Never Paying Taxes Again?
24 mins ago