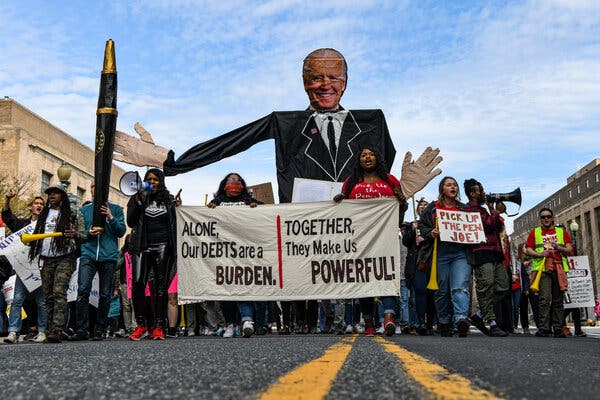 Student loan borrowers want President Biden to wipe out their debt with a stroke of his pen, but his advisers are divided.Credit…Kenny Holston for The New York Times

The pathway to debt forgiveness

This month, President Biden extended the pandemic pause on federal student loan payments until Aug. 31. But with midterm elections approaching, there is pressure from borrowers and the progressive wing of the Democratic Party to get the president to make good on his campaign promise to cancel up to $10,000 in federal student loans for the roughly 45 million Americans who have those debts, The Times’s Stacy Cowley and Zolan Kanno-Youngs report.

Executive action is the only path to debt forgiveness. Senate Democrats lack the votes to forgive student loan debt by legislation, so Biden would have to carry out the measure by executive order, which some of the president’s aides say he doesn’t have the legal authority to do. Proponents of forgiveness say the Higher Education Act of 1965 gives the education secretary broad powers to modify or cancel debt, but any move is likely to face legal challenges.

Even if he can, Biden’s top policy advisers are divided over whether he should erase student loan debt. Some fear it could add to inflation — student debt relief could make it harder to slow spending and bring consumer prices under control — but most economists say the economic effects would be modest. The bigger issue is that fiddling with student loan debt to steer the economy could add uncertainty that could discourage future borrowers. “Obviously, we should be mindful of the impact of a moratorium or a write-down of debt,” Dean Baker of the Center for Economic and Policy Research told DealBook, “but it would be really unfair to use student loan repayments as a way to control demand in the economy.”

The stock market’s April slump continues. The S&P 500 is on track for its worst month since March 2020 because of several factors: Fear that the Fed may raise rates faster than expected, that lockdowns in China could slow economic activity and that rising prices would erode corporate profits.

Alphabet reports an 8 percent decline in quarterly earnings. It was the first time that profit at Google’s parent had fallen since early in the pandemic. Performance was hurt by slower growth in ads on YouTube as well as a decline in the value of its investments.

The C.D.C. says that 60 percent of Americans have had Covid. Population-wide immunity could provide some protection against future waves, but health officials urged people to continue getting boosters, because antibodies from prior infections don’t guarantee protection.

Robinhood lays off 9 percent of its staff. The trading app’s co-founder, Vlad Tenev, said the company, which has grown by almost six times since 2020, had overhired during the pandemic, leading to duplicate roles and job responsibilities.

Russia turns off some of the taps

Russia cut off natural gas to Poland and Bulgaria this morning. Although an initial spike in European natural gas futures prices eased, it represents a warning for Europe’s economy that more serious cutoffs could be coming amid war in Ukraine.

The move upends longtime assurances by Moscow. Russia has long promised it could be a reliable supplier of energy no matter the political climate. Poland and Bulgaria, like most other European countries, had rejected a demand by President Vladimir Putin of Russia to pay for energy in rubles. Moscow is also particularly angry with Warsaw over its strong support for Ukraine, with NATO-supplied arms entering the country via Polish territory.

Officials played down the effect of Russia’s move. Poland’s main energy company says it has “various possibilities of obtaining” gas, including from Germany and the Czech Republic. Poland is also buffered from the cutoff because it gets its electricity mostly from coal, not gas. Bulgaria gets around 90 percent of its gas from Russia, but Greece said it would step in with shipments to its neighbor.

As Europe reduces its reliance on Russian energy, U.S. oil companies won’t be much help. American companies are reluctant to pump more oil because executives fear that higher production would hasten the end of high oil prices.

What Twitter’s deal documents tell us

Elon Musk’s $44 billion offer to buy Twitter is now in writing. Twitter’s board approved the transaction this week, but the deal won’t be final until it’s put to a shareholder vote. Twitter has taken the first step in that process, filing its merger document with the S.E.C. Here are a few things that caught our eye:

A $1 billion breakup fee. Twitter would have to pay Musk $1 billion if it enters into a deal with another bidder, and Musk would have to pay Twitter the same if financing for the deal falls apart. The fee, while large, is roughly 2.5 percent of the deal’s value, which is standard. In fact, given Musk’s unpredictability, many deal makers expected a larger termination fee. The smaller fee is perhaps a sign of the leverage Musk had.

Musk can tweet about the deal. But, according to the merger agreement, he can’t disparage Twitter or any of its employees. Is it an issue that Musk has already criticized Twitter employees? Disparage is “in the eye of the beholder,” Eleazer Klein of the law firm Schulte Roth & Zabel, told DealBook. “The only way that’s going to really play out is if someone wants to go to court and fight over it,” he said. “And what are they going to do? They’re going to terminate the agreement if he goes a little bit too close to the line?”

“Elon Musk” doesn’t count as a risk to the deal. It’s typical for deals to detail if there are unusual circumstances that would allow one of the parties to walk away without having to pay a breakup fee. Twitter’s merger deal, though, specifies at least one instance in which Musk wouldn’t be able to do that. According to the document, if Twitter loses all or most of its users before the deal “by reason of the identity of Elon Musk,” there is no backing out. (As the saying goes: You break it, you buy it.) Indeed, the day Twitter announced its agreement with Musk, it saw a lot of user churn.

Securing financing. Though his original offer had scant details and was received skeptically by Wall Street, Mr. Musk moved swiftly to secure commitments worth $46.5 billion to finance his bid, putting pressure on Twitter’s board to take his advances seriously.

What’s next? Shareholders will vote on the offer, which will also be reviewed by regulators. The deal is expected to take three to six months to close. In the meantime, scrutiny is likely to be intense and several questions remain about Mr. Musk’s plans for the company.

The deal has an Oct. 24 “drop-dead date,” meaning both sides could walk away if a deal hasn’t closed by then. If the deal is still awaiting regulatory approval, Musk and Twitter would have another six months to close it. U.S. regulators may examine Musk’s purchase of Twitter, but they are unlikely to sue to block it because it is not an example of a company buying a competitor. The deal may face tougher scrutiny in Europe, though, where officials warned yesterday that Twitter under Musk’s ownership would have to abide by the E.U.’s new Digital Services Act, which requires social media companies to police content more aggressively.

To prevent trading on insider information, the STOCK Act of 2012 requires members of Congress and top executive branch officials to disclose their financial transactions regularly. But the other branch of government — the judiciary — has been exempt from this requirement. That could change after today, when the House votes on the Courthouse Ethics and Transparency Act. The measure, which has already passed the Senate, has bipartisan support and would make the same demands on federal judges and justices as other officials.

Conflicts are not the only problem. A decade ago, including judges in the STOCK Act was an issue that was raised briefly but was “never seriously considered,” said Tyler Gellasch, a former Senate staff member involved in the bill and a fellow at the Global Financial Markets Center at Duke law school. Now, there is a growing demand that public servants focus on service, Gellasch said, which extends to the judiciary. “It’s not just about whether they are doing something illegal. It’s also about how they are spending their time.”

The bill is expected to pass and go to the White House, said Drew Hammill, Speaker Nancy Pelosi’s deputy chief of staff: “More legislation to come on this topic, but this is a strong, bipartisan start.”

The measure is “better late than never,” Gabe Roth, executive director of the judicial transparency nonprofit group Fix the Court, which supported the bill, told DealBook. “We’ll have a better sense of whether they might be trading shares of the companies appearing before them in court — a major ethical taboo.” And as the judiciary catches up, pressure is mounting to ban congressional stock trading altogether. Given the kind of information that lawmakers have access to, that may be the only way to prevent them from acting on what they learn, Gellasch argues: “It makes sense to eliminate that temptation.”

Davos in a Time of War
4 hours ago