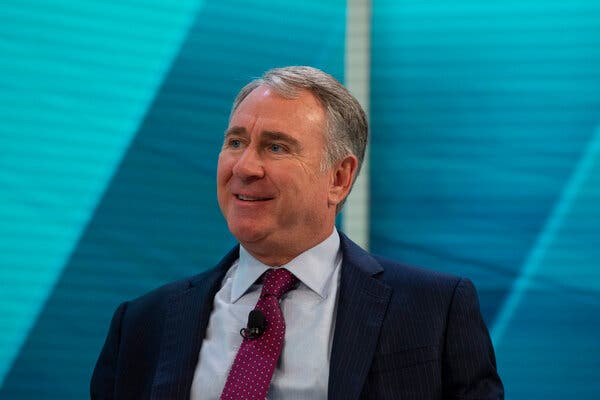 Ken Griffin, the chief executive of Citadel.Credit…Calla Kessler for The New York Times

Citadel Securities, the huge market maker founded by Ken Griffin, announced today that it had sold a stake to the venture capital firms Sequoia and Paradigm for $1.15 billion. The deal, which values Citadel Securities at about $22 billion, will unite an established financial player with two top Silicon Valley growth investors. It’s the first outside investment in Griffin’s firm.

It’s a bet on disrupting Wall Street. Founded two decades ago, Citadel Securities — a corporate sibling to Griffin’s multibillion-dollar hedge fund — has become a trading giant, dominating market making for stocks and options. Its institutional business now has more than 1,600 clients, and it also works with consumer-facing brokerages like Robinhood (more on that below).

“Citadel Securities has carved out a unique place in the financial markets through its ability to absorb and price risk using techniques and capabilities from far outside the traditional world of Wall Street,” said Alfred Lin, a Sequoia partner who will take a seat on Citadel Securities’ board. He added that this technology “helped make markets more accessible for millions of people.”

It’s an endorsement of Citadel Securities’ tech bona fides. Sequoia, which backed the likes of Apple, DoorDash and WhatsApp, is one of Silicon Valley’s top venture firms. (It’s also no stranger to disruption in its own industry: The firm recently made waves by moving to a one-fund model for its U.S. and European investments.) Paradigm was co-founded by Fred Ehrsam, a co-founder of Coinbase, and Matt Huang, who led crypto investments at Sequoia.

It’s an investment that may create more conspiracy theories. Citadel Securities has been criticized for its relationship with Robinhood, where it pays the online brokerage for the right to process users’ trades, which some say could generate conflicts of interest. Meanwhile, Sequoia is an investor in … Robinhood.

It’s a deal that bolsters Griffin’s wealth. The mogul, whose net worth was most recently estimated at $21 billion, is believed to own about 85 percent of the securities unit, according to Bloomberg. If that’s the case, Griffin’s stake in Citadel Securities alone would be valued at some $18 billion.

What happens next: Paradigm’s Huang said that Citadel Securities would move into more markets and asset classes, “including crypto.” (Griffin has mixed feelings about crypto, so this is a noteworthy aside.) And the investment suggests that Griffin’s firm may go public some day, with Sequoia and Paradigm seeking an exit at some point, though we hear any such plans would be years away.

Top universities are accused of conspiring to limit financial aid. A lawsuit accused 16 schools, including Duke, Georgetown and Yale, of violating antitrust laws by colluding to fix prices. The lawsuit challenges an antitrust exemption granted to these universities for financial assistance decisions.

President Biden requires insurers to pay for at-home tests. The White House announced that private health insurers must soon cover the cost of eight at-home coronavirus tests per month. In other virus news, U.S. hospitalizations set a record; Chicago public schools will reopen tomorrow after the city and teachers agreed over pandemic safeguards; and Facebook’s parent company, Meta, will require booster shots for those working on U.S. campuses.

Take-Two buys Zynga to bolster its mobile gaming offerings. The more than $11 billion deal will unite Take-Two, known for console titles like Grand Theft Auto, with Zynga, the maker of mobile and social games like FarmVille. The deal could help Take-Two roll out more smartphone apps and in-game purchase options.

Apple reportedly seeks a streaming deal with Major League Baseball. The iPhone maker is looking into broadcasting weekday games next season, The New York Post reports. M.L.B. has also held talks with Barstool Sports and Amazon for the rights, which were most recently held by ESPN.

Ray Dalio again defends Beijing. The Bridgewater founder said at a conference yesterday that he backed President Xi Jinping’s “common prosperity” economic policy — and that countries like the U.S. could benefit from adopting a similar approach. Dalio recently apologized for a “lack of nuance” in likening China’s human rights approach to that of a “strict parent.”

We’ve got questions for Jay Powell

Jay Powell, whom President Biden nominated for a second term as chairman of the Fed, is likely to be confirmed for another four-year term atop the central bank. Even so, The Times’s Jeanna Smialek writes, he will face tough questions today when he testifies before the Senate as part of the confirmation process.

Why did it take the Fed so long to realize that inflation wasn’t “transitory”? Powell repeatedly predicted last year that inflation would fade. It hasn’t. Powell admitted last month that he was wrong about inflation, and said he was retiring the term “transitory” for good. That won’t stop senators from asking Powell about why the Fed continued to stimulate the economy as prices rose sharply, why the central bank mistakenly presumed inflation would fade and what policymakers plan to do about it now.

What can be done about missing workers? Powell is also likely to face questions about the job market, which is marked by swiftly falling unemployment, rising wages and — paradoxically — millions of missing workers. The pandemic has led to labor shortages, but have those workers dropped out of the labor force forever? Some Fed officials have said that the job market is indeed nearing full employment, indicating they are prepared to raise rates soon to cool the economy.

How should the Fed’s trading scandal be addressed? A handful of Fed officials traded for their own portfolios just before and after the central bank swooped in to rescue a wide array of markets at the pandemic’s onset in 2020. The Fed’s vice chair, Richard Clarida, announced yesterday that he was stepping down early. He didn’t give a reason, but he, too, faces scrutiny over the timing of one of his 2020 transactions that was disclosed only in late December. The episode has prompted Powell to say that the Fed’s trading guidelines most likely need to be revised.

“Quite a lot of people witnessed people in their community dying from Covid — that makes them think life can be short, and you’d better live now than postpone it to a later date.”

— Torsten Müller-Otvös, the C.E.O. of Rolls-Royce Motor Cars, on one factor that “quite massively” helped the ultraluxury carmaker record its highest sales in history last year.

What to make of the wobble in tech stocks?

Wild volatility in the Nasdaq yesterday pointed to the new reality for technology stocks: After being largely immune to bad economic news during most of the pandemic, that resilience may be waning.

The tech-heavy Nasdaq fell as much as 2.7 percent yesterday, a slide that had it approaching a correction, a technical and psychological measure defined as a drop of more than 10 percent from a high. By the end of the day, however, tech stocks had rebounded and the index ended the day with a small gain.

Market watchers said yesterday’s volatility in tech stocks could soon become a problem for investors. “People have a mind-set that equity prices always go up,” said Vincent Reinhart, the chief economist of Dreyfus and Mellon. “There is nothing magical about drawing the line at 10 percent other than it makes people realize that stocks don’t always go up.” Many tech stocks that were early pandemic winners, like Netflix and Zoom, remain well below their highs.

Interest rates and the earnings outlook are weighing on stocks. Many economists expect the Fed to raise interest rates, possibly as soon as March. And although the profit picture remains strong, earnings growth is expected to slow this year.

Elon Musk’s SpaceX is trying to hasten F.C.C. approval for the next phase of Starlink, its internet connectivity venture, which aims to send as many as 30,000 satellites into orbit. The proposal has generated opposition from competitors like Amazon, which complained that SpaceX’s plans are too broad and violate F.C.C. rules. Now SpaceX says that its satellite development “has exceeded its own expectations” and that it is narrowing its contentious plan.

In a letter to the agency, the company argued that this leaves no more cause for delays. “Opponents have made abundantly clear that their primary concern was burdening their lawyers and lobbyists with having to oppose two slightly different configurations,” it states, adding, “SpaceX has now removed that burden.”

Affordable connectivity is a big deal. The F.C.C. just released draft rules for a $14.2 billion program to provide households with discounts on broadband service and help purchasing a computer or tablet. “The past two years have made totally clear that broadband is no longer a luxury, it’s a necessity,” Jessica Rosenworcel, the F.C.C.’s chairwoman, said in a statement on Friday, the same day SpaceX sent its letter. SpaceX said that Starlink can help connect more Americans, advancing the F.C.C.’s goals. But concerns about the satellites abound.

China says its astronauts are dodging Starlink satellites. The nation’s space station has had to maneuver to avoid SpaceX’s machines twice last year, it told the United Nations last month. The events were confirmed by independent observers and drew attention to crowding in low-Earth orbit, also home to the International Space Station. Adding tens of thousands of Starlink satellites to the mix is a risk some critics say the world can’t afford.

On Earth, Starlink has very different issues. It seems that cats are attracted to the heat generated by the satellite dishes on “snow melt mode” and huddle on them for warmth, interrupting internet connectivity in winter.

For Djokovic, Questions Over Test Result and Public Events

It’s Hard to Tell When the Crypto Bubble Will Burst, or If There Is One

3 Little Words to Send a Lamborghini on Its Way

Fish Sauce Is Good for Just About Everything
2 hours ago

Fish Sauce Is Good for Just About Everything

U.K. Police Ask for Report on Boris Johnson to Withhold Details
7 hours ago