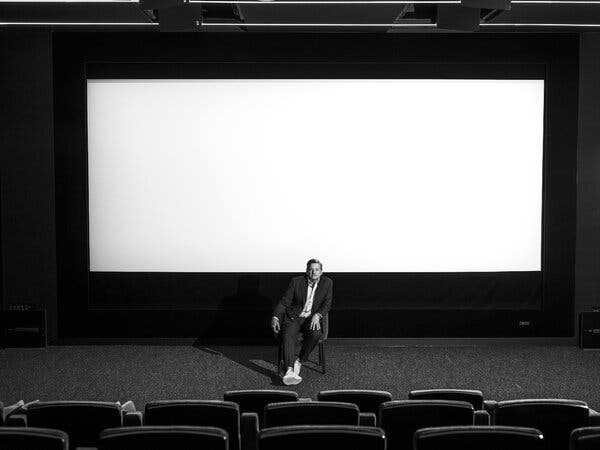 Reed Hastings, Netflix’s co-founder, once dismissed the idea of putting ads on the streaming service as a nonstarter. Then, this year, the company posted its first subscriber loss in more than a decade, causing its stock to nosedive. Now, the company is talking to Comcast and Google to help it with the details of a plan to bring an ad-supported offering to its service, The Wall Street Journal reported yesterday.

Ben Mullin, a media reporter for The Times, says the advertising plan could create significant upside for Netflix, even if it raises questions in Hollywood. Here are his thoughts:

Ed Lee, another media watcher at The Times, says Netflix is making the move out of necessity, not opportunity.

For now, Netflix isn’t saying much about its plans. A Netflix spokeswoman said yesterday: “We are still in the early days of deciding how to launch a lower-priced, ad-supported option, and no decisions have been made. So this is all just speculation at this point.”

Jay Powell, the Fed chair, says a recession is “certainly a possibility.” Powell said the Fed might be able to slow inflation without tipping America into a painful downturn. But successfully executing a so-called soft landing “has been made significantly more challenging by the events of the past few months,” he said, citing supply disruptions that have pushed prices higher. He will appear before the House Financial Services Committee today.

Support for a bipartisan gun reform measure in the Senate reflects a political shift. Fourteen Republicans — including Mitch McConnell of Kentucky, the minority leader — broke with their party to advance the legislation. Only two are up for re-election this year, and most Republicans are expected to oppose the bill.

Russia is ramping up hacking attacks on Ukraine’s allies, Microsoft researchers say.About 128 targets in 42 countries have been hit by Kremlin-directed cyberattacks since the war began, with the U.S. topping the list, they say. The increase in attacks was expected, but they have been less successful than security experts initially predicted.

Elon Musk says Tesla’s factories are “gigantic money furnaces right now.” Musk said in an interview that plants in Texas and Berlin were “losing billions of dollars” as battery shortages and shipping issues slowed production. He said the company’s main concern was keeping factories operating, so it could keep paying people and “not go bankrupt.”

Shares of Altria, the Marlboro maker, were hit yesterday after The Wall Street Journal reported that the Food and Drug Administration would order Juul Labs to take its e-cigarettes off the U.S. market. Altria paid nearly $13 billion for a 35 percent stake in Juul in 2018, and the Marlboro maker had already written down its investment in Juul by at least $11 billion. Yesterday’s news could render that stake worthless or close to it — and leave a huge question mark on the tobacco giant’s future.

E-cigarettes were once the next big thing. Big Tobacco, facing slowing sales of traditional cigarettes, jumped right in. R.J. Reynolds introduced Vuse. The e-cigarette start-up Njoy got backing from high-profile investors like Sean Parker, of Napster and Facebook fame, and the venture capitalist Peter Thiel.

But as Juul’s sales skyrocketed, especially among teens, the F.D.A. became concerned. That led to a 2018 regulatory crackdown. That’s when Juul turned to Altria for funding, as well as some regulatory muscle, instead of trying to fund-raise $20 billion from venture capital firms. In 2020, the agency mandated e-cigarette makers get approval to stay on the U.S. market, which it now appears Juul will not get. An appeal is probable. Juul conducts a majority of its business in the U.S. and reportedly had a net loss last year of $259 million.

This could leave Altria in a world of trouble. Its core product is under fire, with the F.D.A. looking to significantly reduce nicotine levels in cigarettes. Altria gets about 90 percent of its revenue from smokable products. Its revenue fell slightly last year, according to regulatory filings, and its stock is down more than 45 percent in the past five years. Other attempts to diversify, like an investment in the cannabis company Cronos, have similarly faltered: Altria wrote down that investment by $200 million at the end of last year. Might Altria look to make a big play outside cigarettes — say food or snacking, given its huge distribution in convenience stores? Pass the popcorn.

— Malaika Adero, an author and book agent, on being Black in publishing. A new cadre of executives is trying to change the industry.

The N.F.L. and toxic workplaces

Professional football teams are not your typical everyday employers. But their visibility means they should be setting an example for how to handle issues like bullying, harassment and intimidation, says Representative Carolyn Maloney, the chairwoman of the House Oversight and Reform Committee. Instead, some have fallen far short of that.

At a hearing yesterday, Maloney said the N.F.L. secretly agreed to withhold evidence that Dan Snyder, the owner of the Washington Commanders, had fostered a “notoriously toxic workplace.” Maloney, Democrat of New York, said the league’s failures had compelled her to introduce two new bills intended to protect all workers: “What happens in the N.F.L. has consequences for the rest of the country.” (A representative for Snyder said the committee’s investigation was “predetermined from the beginning,” adding that the team addressed workplace issues “years ago.”)

The proposals would limit nondisclosure agreements and protect worker privacy. The committee began investigating the N.F.L.’s handling of misconduct claims and subsequent investigations in the fall. It found that Snyder relied on bullying and intimidation and treated men and women unequally. The Commanders, for example, fired a female cheerleader who had a consensual sexual relationship with a player, who kept his job. Footage of cheerleaders was also said to have been turned into a personal video for Snyder, an accusation he and others deny. One of the bills introduced by Maloney outlines processes for handling misconduct claims and bans settlements that prevent transparency. The other requires consent to capture employee images and prohibits illegitimate uses.

Will the bills pass? Republicans acknowledge that bullying is a serious problem, but they say that private companies are not under the committee’s jurisdiction, and that Congress should focus on inflation and the economy. The top Republican on the committee, Representative James Comer of Kentucky, protested that an “overhaul” at the Commanders had already begun. The likelihood of passage may be slim, given the vociferous resistance.

Workplace toxicity can also be an economic issue. A McKinsey report on employee mental health across 15 countries says companies “pay a high price for failure to address workplace factors that strongly correlate with burnout, such as toxic behavior.” Toxicity was the biggest predictor of attrition, researchers found. Dissatisfaction with bad management has helped drive the “Great Resignation,” with corporate culture ranked more than 10 times as important to workers than compensation, based on an analysis of Glassdoor reviews by other researchers. Companies are increasingly offering programs for worker wellness while leaving fundamental problems unaddressed, McKinsey researchers wrote: “As an employer, you can’t ‘yoga’ your way out of these challenges.”

Tags
Netfli̇x New That Will Year

Need to Fix a Struggling Pitcher? Put Him in Dodger Blue.

Pay Down Your Credit Card Balances, and Other Tips for a Slowing Economy
3 hours ago

A Blow to Regulators
4 hours ago

Who Will Help Care for Texas’ Post-Roe Babies?
6 hours ago

Is Baltimore Big Enough for the Two of Them?
7 hours ago