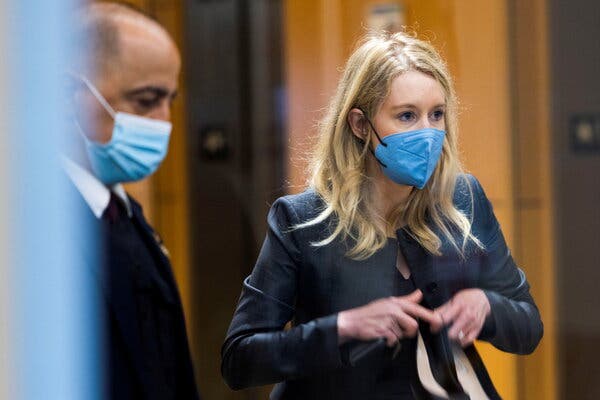 The high-stakes trial of Elizabeth Holmes, the founder of the collapsed medical start-up Theranos, is headed toward a dramatic finish. The latest twist came on Friday, when Holmes unexpectedly took the stand in her own defense, after the prosecution rested its case. She testified for an hour, and is expected to continue today. Holmes has been charged with 11 counts of fraud and faces up to 20 years in prison on each count. She has pleaded not guilty.

Whether Holmes would testify had been one of the biggest questions of the trial. Up until Friday afternoon, many legal experts predicted that she wouldn’t. The benefits of doing so, the experts argued, could be offset by the risks of cross-examination.

At first, her testimony raised concerns for her defense. Her lawyers’ strategy has been to paint the former Theranos C.E.O. as inexperienced, led astray by others like her former boyfriend and business partner Sunny Balwani (who is being tried separately). But on the stand, Holmes depicted herself as very much in control. She presented herself as an expert in the technology Theranos was developing and detailed how she used that knowledge to attract investors, whose money would eventually be wiped out.

But she also rebutted a key argument by prosecutors. The prosecution sought to establish that Holmes withheld information, particularly financial reports, from investors. But on the stand, Holmes detailed the “very comprehensive diligence process” of Don Lucas, a legendary venture capitalist who eventually invested in Theranos and became its chairman. The defense presented a 2006 email in which Holmes sent Lucas detailed financial information. (However, this may undermine another defense argument: that investors were careless and at least partially to blame.)

The trial is also a referendum on Silicon Valley’s start-up culture. If Holmes is found guilty, it would put truth-stretching start-up founders on notice. But if she is acquitted, it would bolster the tech industry’s “fake it til you make it” approach. “A non-guilty verdict will vindicate a Silicon Valley culture of celebrating aggressive innovation at the expense of the complete and whole truth,” said Jeffrey Cohen of Boston College Law School.

The Times will cover what is expected to be Holmes’s second day of testimony in a live briefing when the trial resumes in San Jose, Calif., this morning.

Covid deaths this year surpass 2020’s toll. The Delta variant and patchy vaccination progress contributed to the grim milestone. Separately, Disney halted a vaccine mandate for Walt Disney World employees after Florida banned such requirements, and Australian Open officials ordered all players to be inoculated, raising questions about whether Novak Djokovic — whose vaccination status is unclear — will be allowed to participate.

Republican donors flock to two Democratic senators. Joe Manchin of West Virginia and Kyrsten Sinema have drawn the backing of prominent G.O.P. moguls, according to The Times, including the oil billionaire Harold Hamm, the Cleveland Browns owner Jimmy Haslam, the Home Depot co-founder Ken Lagone, the activist investor Nelson Peltz, and the Apollo C.E.O. Marc Rowan. The donors have sought to buttress Manchin’s and Sinema’s efforts to whittle down Democratic spending and tax proposals.

Concern about a Chinese tennis star’s fate puts pressure on Olympics organizers — and sponsors. The International Olympic Committee said its chief spoke over video with Peng Shuai, whose whereabouts remain unknown after she publicly accused a former Chinese government official of sexual assault. But the Women’s Tennis Association said it hasn’t been able to reach Peng, and critics like the pro basketball player Enes Kanter said the I.O.C. should move the 2022 Winter Olympics out of Beijing in protest.

Ford drops plans to partner with Rivian on electric vehicles. The move signals Ford’s confidence in developing its own models, and comes after it said that it will produce its own computer chips. But Ford will remain a big investor in Rivian, whose shares are trading at nearly double their I.P.O. price.

High stock prices and low interest rates have fueled record deal making recently. This isn’t just opportunistic, with companies using M.&A. to prepare for the postpandemic economy, according to a Harvard Business Review report. HBR surveyed about 500 executives to see what is driving deals.

Bigger is better. The pandemic highlighted how large companies can better manage challenges like labor shortages and supply chain troubles. Some 70 percent of survey respondents said they had seen or expected to see consolidation in their industry, and just over half said their top priority in making deals was adding market share.

A premium on new technologies. Digital technology was a focus before the pandemic, but its prominence during lockdowns and other pandemic disruptions has made it even more important. Just under half of respondents said the need to acquire new technologies would help drive M.&A. in their industry over the next two years.

Realigning for a new world. Nearly 60 percent of respondents agreed that the pandemic had led executives to look beyond their industry for deals. And the most popular driver of deals in the coming years, respondents said, would be the need to pivot into new business lines “to operate in the new normal.”

With corporate deal makers preparing for greater consolidation, and a race to acquire new technologies and expansion into new industries, it’s no wonder that clashes between business groups and the Biden administration, whose antitrust enforcers have made reining in corporate power a priority, are heating up.

“One of the flaws in transportation planning and funding has been retreading yesterday’s ideas. The sky obviously has multiple dimensions and gives you the ability to be creative.”

— Mayor Francis Suarez of Miami, on his city’s interest in electric flying taxis.

► Fed chair: President Biden is expected to announce his nominee to lead the Federal Reserve. Jay Powell’s term as chairman ends in February. A Republican who was appointed as a Fed governor by President Barack Obama and made chair by President Donald Trump, Powell has a good chance of being reappointed. But the job could also go to Lael Brainard, a Fed governor supported by progressive Democrats who has pushed for the Fed to take a more active role in climate finance policy.

► Holiday shopping season: It’s been a challenging year for retailers, as the pandemic altered shopping habits and led to labor shortages and supply chain disruptions. But Walmart and Home Depot both reported strong earnings last week, raising expectations for reports from Best Buy, Gap, Nordstrom and others this week. Retailers are expecting a record holiday shopping season, though its traditional kickoff on Black Friday may not feel exceptional to customers: With demand outpacing supply, the deals aren’t likely to be stellar.

► Thanksgiving: On Thursday, the New York Stock Exchange and Nasdaq will be closed, as will bond markets. (The exchanges also close early on Friday.) Here are Thanksgiving recipe ideas for those still planning their menus.

Kisanfu is a new cobalt and copper mine being built by a Chinese conglomerate in the Democratic Republic of Congo.

Solar panels and electric car batteries rely on cobalt, a metal abundant in the Democratic Republic of Congo and rare elsewhere. The U.S. had long recognized the Central African nation’s strategic importance, yet recent administrations have done little to maintain ties, leaving China to step in.

An “international cycle of exploitation, greed and gamesmanship” characterizes the global race to tap Congo’s mineral riches, according to a new investigation by The Times’s Dionne Searcey, Michael Forsythe and Eric Lipton. It began with Americans extracting Congo’s uranium to help build the bombs dropped on Hiroshima and Nagasaki and continues with a Chinese takeover of its cobalt supply, a vital ingredient to the clean energy revolution.

More than two-thirds of the world’s cobalt production comes from Congo, so the country is taking center stage as the auto industry shifts to battery-powered vehicles from gas-burning ones. Electric cars rely on a host of minerals and metals often not abundant in the U.S. or the oil-rich Middle East, which sustained the last energy era.

Yet as the green energy race revved up, Americans dropped out of Congo. And as demand for cobalt has surged, U.S. interest in Congo has continued to wane. Hunter Biden, President Biden’s son, even helped facilitate China’s expansion in the country: He was part owner of a firm that helped a state-backed Chinese conglomerate buy one of the world’s richest cobalt mines from an American company. The Biden administration warned this year that China might use its growing dominance of cobalt to disrupt America’s retooling of its auto industry. But when asked if the president had been made aware of his son’s connection to the sale, a White House spokesman said, “No.”

Read the key findings from “Race to the Future,” a multipart investigation of the global demand for raw materials as the clean energy revolution takes off.

A Tale of Culinary Reconciliation, Beside the Eiffel Tower
16 mins ago

A Tale of Culinary Reconciliation, Beside the Eiffel Tower

The Fed’s preferred measure of inflation surged again in October amid rising food and energy prices.
39 mins ago

Once a Warrior, Then a Nonprofit Leader, Now an Entrepreneur
52 mins ago