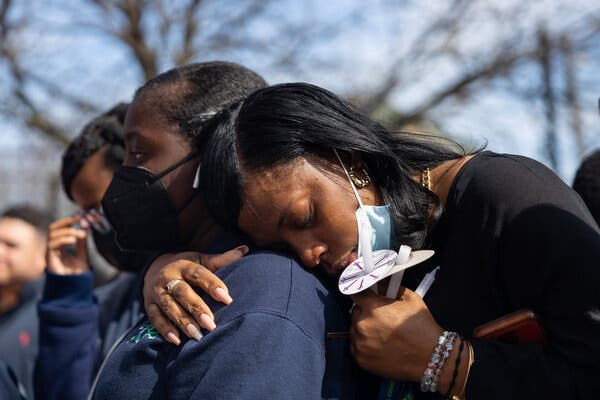 Researchers say children exposed to gun violence, even at a remove, can suffer long-term repercussions.Credit…Mostafa Bassim for The New York Times

It’s almost unimaginable, but at least 40 children and teenagers have been shot in New York City so far this year. Consider:

At least four of the people struck by bullets when a gunman opened fire in a Brooklyn subway car two weeks ago — or injured in the panic on the platform at the next stop — were children or teenagers. But they weren’t the only young people affected by the shooting. Classrooms went on lockdown, shutting doors to visitors as students posted on windows messages of hope — and anxiety.

On the same day, a community 16 miles away in the Bronx was facing a tragedy, a memorial for a 16-year-old who had dreamed of becoming a model. She was killed when she was hit by a stray bullet, and two other teenagers were injured. She was walking home from school.

The following afternoon, as the police arrested a 62-year-old man in the subway attack, dozens of East Flatbush teenagers stood outside their middle school and wept. They were mourning a 12-year-old who had recently been killed — shot in a case of mistaken identity.

“I find it really hard to admit that I’m in pain,” said Tatiana Barrett, 14, a student at the school, the Brooklyn Science and Engineering Academy, and a friend of the slain 12-year-old. “As the days go by, I get angrier and angrier.”

It is well known that the pandemic created new mental health problems for the young. Medical groups declared an emergency in child and adolescent mental health last fall, a crisis compounded by uncertainty and grief. More than one in every 200 children in New York lost a parent or caregiver to the virus, almost double the nationwide rate, a recent analysis found.

And when shootings rose during the pandemic, so did the number of young people caught in the violence. Children and teenagers already make up one in every 10 victims this year, and the overall toll is on track to match or exceed the number of youth victims last year, when 138 were struck by bullets.

That has made the grief only more acute for children and teenagers.

Experts have long warned of long-term setbacks in schooling and health for students exposed to gun violence. Dr. Aditi Vasan, a pediatrician at Children’s Hospital of Philadelphia, where gun violence reached new highs last year, said the ramifications could arrive much sooner.

Dr. Vasan and other researchers found that in the two weeks after a shooting, children living nearby were nearly twice as likely to visit emergency rooms for problems like anxiety, depression and self-harm. She said it was striking how rapidly symptoms could appear.

After the mistaken-identity shooting in East Flatbush, Tatiana Barrett said she has had trouble concentrating, describing herself as often “blurry-minded.” Her mother said that she has become withdrawn, asking to spend more time alone. She had known the shooting victim, Kade Lewin, 12, since she was 10. She mourned him at the funeral last week, but as for his burial the following day, she told her mother that “she couldn’t bear it.”

David Walcott Jr., a 12-year-old schoolmate, asked to stay home from memorials for Kade at school and the funeral, his father said. He has become anxious, worrying about who could be the next victim. David, watching television at 2 a.m. recently, was rattled when a car driving by outside backfired.

“Why do we live here?” his father, David Walcott, recalled his asking. “He said he’s starting to understand racism. He’s like, ‘It only happens in our neighborhoods that innocent people are dying.’”

The teenagers in East Flatbush released three turquoise balloons into the sky at the end of a memorial for Kade. The wind carried one into a tree where it lingered, a reminder of the persistent grief in the school nearby.

Enjoy a partly sunny day with a high in the low 60s. In the evening, expect temps in the low 50s with a slight chance of rain after midnight.

The city has been clearing encampments of homeless people like this one under the Brooklyn-Queens Expressway.Credit…Hilary Swift for The New York Times

Adding funding for his push to move homeless people off the streets, Mayor Eric Adams is allocating $171 million for expanded services in his proposed budget. He said the money would pay for 1,400 temporary beds for people now living on the streets, as well as new drop-in centers and more outreach efforts.

Adams, who has focused on public safety and the city’s pandemic recovery since taking office in January, has been under pressure to do more to help homeless people as the city has moved to break up encampments on the streets and in the subway system.

Adams’s plan would expand a program that began under his predecessor, Bill de Blasio, which provides specialized shelter beds for New Yorkers coming off the streets — beds in facilities with more services to ease the transition for homeless people struggling with mental health problems and substance abuse issues. While the facilities vary in size, they tend to be smaller than traditional barracks-style shelters and have fewer rules: no curfews and fewer restrictions on drug and alcohol use.

Adams had already announced the addition of 500 beds. The plan he laid out on Sunday would bring the total to more than 4,000, city officials said.

“Too many of our fellow New Yorkers are experiencing unsheltered homelessness,” the mayor said in a statement, “but we cannot and will not abandon them.”

Adams said he was putting the money in the executive budget for the fiscal year 2023. As part of his $98.5 billion preliminary budget in February, he proposed spending $2.1 billion on the Department of Homeless Services.

City Council Speaker Adrienne Adams applauded allocating more services for the homeless. The speaker, who is not related to the mayor, called the plan “the right approach and a major step forward for our city.”

The mayor, a former police captain, has defended police sweeps of homeless encampments, several of which have been captured in videos circulating on social media and showing officers throwing homeless people’s belongings into the garbage.

Craig Hughes, a senior social worker with the Urban Justice Center, said that his clients needed the safety and privacy of single rooms, and permanent housing placements that did not require people to go through the shelter system. While he said the mayor’s proposal to add shelter beds was a good idea, he denounced the sweeps of homeless encampments.

“His entire homeless policy has been about getting homeless people out of sight,” Hughes said.

I was at a thrift shop on the Upper West Side when I saw a set of two framed, unsigned drawings of birds.

The drawings were clearly the work of the same artist. They were of odd-looking birds with huge, wide eyes done in charcoal.

I liked one but not the other. The one I liked was of a single bird resembling an emu that was staring off to the side.

The other drawing was of two birds that looked like dodos. They had similar expressions and were facing forward, as if to stare at the viewer. I just couldn’t see hanging that drawing on my wall and looking at it every day.

Since they were obviously by the same artist, I felt funny about breaking up the set, so I didn’t.

Stopping at the shop again a few days later, I was surprised to see that the drawing I liked was still there but that the other one was gone. Someone else must have seen them, liked the drawing I did not and wasn’t worried about breaking up the set.

I immediately bought the drawing that remained.

Walker Clermont, Jeff Boda and Ed Shanahan contributed to New York Today. You can reach the team at nytoday@nytimes.com.

Putin congratulates Emmanuel Macron on his election victory in France.

Amid a Rise in Shootings, New York’s Children Confront a Wave of Grief