Good morning. It’s Monday. We’ll look at an architect who lent his license to a New York City developer to approve buildings he says he didn’t design. We’ll also look at whether to expect an economic payday from casinos. 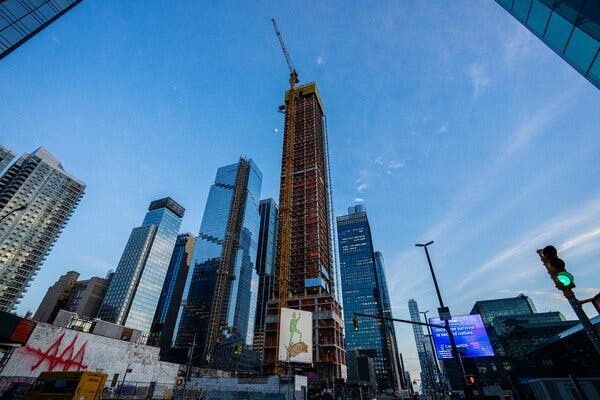 Warren Schiffman says he retired as an architect in 2016.

Since then, his professional seal and his signature have been used on the designs of three large-scale building projects in New York City. One is a 642-foot-tall hotel in the Hudson Yards development that is under construction.

Schiffman says he played no active role in the three projects. My colleague Matthew Haag writes that his contention raises questions about whether the plans were approved without a registered architect, as required in New York State.

[The Hotel Is 642 Feet Tall. Its ‘Architect’ Says He Never Saw the Plans.]

A document obtained by The New York Times indicated that Schiffman’s credentials were used to fake his approval of building designs that he did not review.

The document was a contract that included an eight-point agreement outlining how DSM Design Group, the design firm of the Marx Development Group, could continue to use his professional seal after he retired. Schiffman was to receive quarterly payments from the developer that were substantially lower than the norm — $175,000 over 10 years.

The contract, signed just before the Marx Development Group began the three projects, called for Schiffman to “provide your architectural stamp and signature to the DSM Design Group when requested” and to “make best efforts to respond within 48 hours of any request for such service.” Schiffman says he was never asked to review any plans.

Building professionals in New York City said that the allegations involving Schiffman and the Marx Development Group were unusual.

“Oh, my, goodness gracious, that’s a new one,” said Steven Zirinsky, the co-chairman of the Building Codes Committee at the New York chapter of the American Institute of Architects.

Officials at the city’s Department of Buildings said they did not find any structural defects in the plans for the Hudson Yards hotel. Department records show that it reviewed the plans five times between 2018 and 2020, when they were approved. One of the other projects was for a 126-room hotel near La Guardia Airport that was completed in 2019 and is now being converted to a shelter for the homeless. Plans for the third project, a pair of high-rise apartment buildings in Queens, have not been approved.

Schiffman forfeited his license to practice architecture last month. As part of an investigation by the state’s Department of Education, which oversees professional licensing, he admitted that he had practiced architecture when he was not authorized to do so. Under state law, the “unauthorized practice” of architecture can include practicing without a license or helping someone who is not licensed — by, for example, “permitting, aiding or abetting an unlicensed person to perform activities requiring a license.”

Schiffman said in an interview that he had given up his license because of his age — he is in his mid-80s. He denied admitting to state investigators that he had practiced when he was not authorized to do so. He said he had renewed his license after he retired. But he also said he never completed 36 hours of courses, a requirement for renewal.

He also denied that he had an agreement with Marx Development Group, though later in the same interview he read several lines from the contract. He also acknowledged that he still received payments from the developer.

Marx did not return numerous calls and emails seeking comment. In recent months, Marx Development Group removed Schiffman’s name from several of its projects and alerted the city’s Department of Buildings that another licensed professional had replaced him.

Prepare for a chance of showers and thunderstorms early this morning. The rest of the day will be partly sunny with temps near the mid-80s. Tonight, mostly cloudy in the mid-60s.

In effect until June 20 (Juneteenth).

Will casinos pay off for the economy?

The casino industry has lusted after New York City for years, and in April, state lawmakers gave the green light for three casinos downstate. Analysts say that a new casino in the city could transform the national gambling landscape by tapping directly into the country’s largest market and its global appeal as a tourist destination.

But evidence from other cities suggests casinos rarely deliver on their long-term economic promises. I asked Nicole Hong, who writes about the New York City economy, what to expect.

The premise of casino gambling is that it would create an economic windfall for New York City. Will it?

It’s too early to predict.

In the short term, the state will get the upfront license fees, which will be at least $500 million per casino. In terms of tax revenue, the state will take a huge chunk of the gambling revenues that the casinos make, and casinos can be taxed at a much higher rate than other types of businesses.

But the size and sustainability of the windfall in the long term are an open question.

There are four casinos in upstate New York. Have they met the revenue targets they outlined when they sought their licenses?

Even before the pandemic, those casinos were underperforming expectations. The state comptroller’s office found that in 2019, the casinos contributed $188 million in gambling taxes to the state, two-thirds of what they had projected in their license applications.

Part of the problem is that the Northeast is getting oversaturated with casinos, and they’re all competing for a similar pool of customers.

Casinos do come with jobs, especially during the construction and grand-opening phases. A single casino can employ thousands of people. But economists told me that the jobs often pay low wages, which stunts the potential for real economic growth.

We also still need to see how things shake out with the labor market in the pandemic. Around the country, many casinos have reported a shortage of workers, similar to the challenges facing other hospitality businesses like restaurants.

Where are we likely to see casinos, and what’s the timetable?

The favorites for two of the licenses are for the existing “racinos” — racetrack casinos — in Queens and in Yonkers, N.Y.

The real competition seems to be for the third license. By October, the state has to appoint a commission who will manage the application process, so we might not know the exact sites until next year. But the lobbying frenzy has already begun. The pitches include parts of the Manhattan waterfront, Times Square, Coney Island and the area around Citi Field in Queens.

I traveled to New York City last fall for a writing workshop with eight women from around the country. It was hosted by a well-known author at her home in Washington Heights.

I considered a hotel on the Upper West Side. How hard could it be to navigate the subway to 155th, I thought as I clicked “book” for a nonrefundable room.

Harder than I anticipated.

Expecting a friendly out-of-towner would be staying nearby, I emailed the group, hoping to find a subway partner, only to get several versions of “I wish I could help.”

Then a woman who lived in Chelsea replied, offering to Citi Bike the 50-plus blocks to my hotel and hop on the subway with me from there.

I said I would be waiting with coffee and asked what kind she wanted.

When the morning came, the weather was perfect for late September. I held the coffees, one in each hand, while I waited outside the hotel. Carelessly, I took a sip from the cup that was hers, and then nervously greeted her with my confession.

With a slight chuckle, she lifted the cup to her lips and took a sip. We bustled through the crowded 72nd Street station and down the steps to the 1.

Soon we arrived at our destination, a cozy prewar apartment filled with the scent of warm blueberry scones, the chatter of spirited women and the sound of a Newfoundland barking every time a boat went by on the Hudson.

And, of course, there was a French press for topping off our half-guzzled lattes.

Tags
Building Had Part Sai̇d That

The Hotel Is 642 Feet Tall. Its ‘Architect’ Says He Never Saw the Plans.

Russia hits Ukraine with over 40 missiles, including in areas that were recently spared.

Agents Are Blocked From Using Discretion in Deportation Arrests

Featured Posts
How G.O.P. Support for Decriminalizing Abortion Faded Over Decades
25 mins ago

As Wimbledon Begins, an Era of Sports Free of Bans and Boycotts Ends
7 hours ago