MANDATAH VILLAGE, Afghanistan — It was nearly 3 a.m. in the mountainous borderlands of eastern Afghanistan when a deafening thud jolted Qudratullah awake. Confused, he staggered to the doorway of his mud brick home, looked outside and froze.

Thick plumes of black smoke and dust filled the air. The front of the modest house where his relatives lived was a pile of rubble. His 3-year-old nephew stood in the yard, sobbing. Behind him, four more children were sprawled across the pale earth, their lifeless frames soaked in blood.

Qudratullah ran toward them, he said. Then another blast struck.

His village, Mandatah, was one of four in eastern Afghanistan hit this month by Pakistani airstrikes, Afghan officials said, killing at least 45 people, including 20 children.

Among them were 27 of Qudratullah’s relatives —an almost incomprehensible loss. Qudratullah, 18, who like many in Afghanistan goes by only one name, lost his 16-year-old wife, who was crushed beneath a pile of rubble in the second airstrike. His older brother, who survived, lost all four of his daughters, all under 11.

“I’m devastated,” Qudratullah said. “I lost my wife, my relatives, our home, our vehicles, our animals, everything.”

The pre-dawn airstrikes in Khost and Kunar Provinces two weeks ago marked a serious escalation of the cross-border conflict in this remote, wild and rocky stretch of Afghanistan, and exacerbated tensions between the two countries that have navigated a delicate relationship since the Taliban seized power last year. 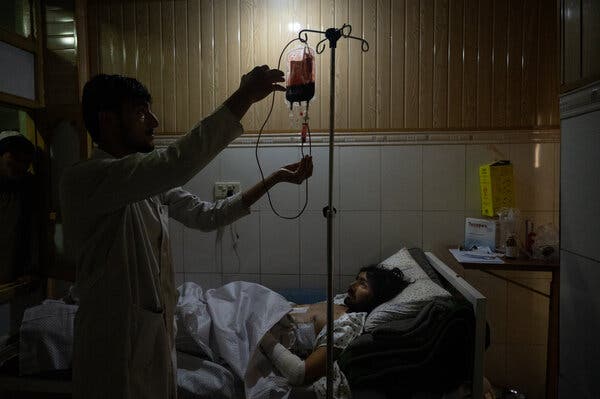 Qudratullah’s brother Sarbaz Ji, 25, was wounded and taken to a hospital in Maton, the capital of Khost Province.

Pakistani officials have not confirmed or commented on the airstrikes.

The airstrikes, which Afghan officials said were carried out by Pakistani military aircraft, came several days after militants said to be operating from the area killed seven soldiers across the border in Pakistan.

In eastern Afghanistan, many feared that the carnage of the recent airstrikes was the beginning of a violent new chapter of the long-running conflict in the tribal lands that spill across the porous border. Reinforcing those concerns, Afghanistan’s acting minister of defense, Mullah Muhammad Yaqoob, warned in a speech on Sunday that the Taliban government would not tolerate any more “invasions” from neighboring countries on Afghan soil.

“Pakistan sending in manned aircraft and killing so many people in different places, the Taliban’s defense minister threatening war if there are more attacks — this is a turning point,” said Asfandyar Mir, a senior expert at the United States Institute of Peace.

For over a decade, Pakistani authorities have sought to stamp out the militants hostile to the Pakistani state in Afghanistan’s borderlands, sporadically hitting the area with artillery that have killed a handful of civilians each year.

After the Taliban toppled the Western-backed government in Afghanistan, many in Pakistan hoped that the insurgents turned rulers — who benefited from Pakistan’s support over the past 20 years of war — would rein in the violence by the militants, known as Tehrik-i-Taliban Pakistan or the Pakistani Taliban.

But in recent months, attacks by the group in Pakistan have surged: Since the Western-backed Afghan government collapsed in August, the Pakistani Taliban have carried out 82 attacks in Pakistan, more than double the number over the same period of the previous year, according to the Islamabad-based Pak Institute of Peace Studies. The attacks killed 133 people.

Kanai, another village in Khost Province, was also hit in the airstrikes.

Those numbers are still relatively low compared with the height of the Pakistani Taliban’s insurgency around 2009, but the recent sharp increase in violence has fueled fears that the group is gaining strength after having declined over the past decade, and has reinforced concerns that Afghanistan under the new Taliban government could become a haven for militants.

The Islamic State has carried out several attacks across the country, mainly against Afghanistan’s Shiite minorities, while the Pakistani Taliban have resurged in the east, analysts say.

Taliban officials have denied providing safe haven for militants, including the Pakistani Taliban, but the issue has become a flash point between Afghan and Pakistani authorities, who claim that the militant group — which is responsible for some of the worst terrorist attacks in Pakistan’s history — has become emboldened under the new Taliban government and allowed to operate freely on Afghan soil.

The Pakistani Taliban, which analysts estimate to have several thousand fighters in eastern Afghanistan, have maintained ties with the Taliban for over a decade and pledged allegiance to the Taliban leader. Hundreds of jailed Pakistani Taliban militants were released from prison last year as the Afghan Taliban seized control of major cities and liberated their prisons.

“It would be fair to describe the T.T.P. as the ideological twin of the Afghan Taliban,” said Madiha Afzal, a fellow at the Brookings Institution, using the abbreviation for Tehrik-i-Taliban Pakistan. “When the Taliban took over Afghanistan last year, the T.T.P. hailed the Taliban’s ‘victory’ and renewed its oath of allegiance.”

The villages hit in the recent airstrikes are nestled between mountains blanketed in pine forests. With soil too stubborn for large-scale farming, most residents scrape out a living harvesting pine nuts each fall or collecting lumber from the forest to sell in the local market.

The glint of a barbed-wire fence dividing Pakistan and Afghanistan is visible just over the horizon. The border, known as the Durand Line, cuts directly through traditional Pashtun lands and for decades was little more to families divided on either side than a line drawn across the maps of British colonial officers.

The fence itself has been a source of tension between the two countries since Pakistani authorities began its construction in 2019 along the disputed border.

When the Pakistani military launched a sweeping military offensive against militants in 2014, hundreds of thousands of people fled the fighter-bombers pounding Pakistan’s tribal areas and crossed into Afghanistan, seeking shelter with relatives.

Among them were many militants with the Pakistani Taliban, who found refuge among the Taliban. For years, they quietly regrouped amid the threat of American airstrikes and offensives by Western-backed Afghan security forces. But since the Taliban seized power last year, many militants, now able to move freely, have returned to their relatives’ homes along the border, residents say.

Signs of their presence and support abound: Children wear small buttons with pictures of Hakimullah Mehsud, the second emir of the Pakistani Taliban, who was killed in an American drone strike in 2013. The militant group’s flag is hoisted above homes and shops.

And unlike in many other parts of the country, where the Taliban’s security forces have conducted house-to-house sweeps to collect weapons from civilians, these villages are flush with armed men.

But as the signs of Pakistani Taliban militants have grown in recent months,so too has the shelling from Pakistan, residents say. Still, the devastation from the airstrikes on April 16 was unlike anything they had ever experienced.

Mannan, 60, on the rubble that had been a home in Mandatah village.

Around 3 that morning in Kanai village, Rangin, 30, felt his wife nudging him to wake upfor suhoor, the pre-dawn meal Muslims eat before the daylong fasts during the holy month of Ramadan. A migrant from North Waziristan in Pakistan, he fled during the military offensive and eventually built a small home on the Afghan hillside where he lived with his wife and four children.

Rangin had told his wife to let him sleep, then the walls and ceiling crashed down on top of them in a deafening boom, he said. Trapped beneath the rubble, his right arm was pressed against his wife’s torso, which swelled and sank as she fought to breathe. Minutes later, two more blasts destroyed a neighbor’s empty home and a shop down the road, killing its 16-year-old shopkeeper.

After a half-hour, Rangin could no longer feel his wife’s chest move. He was eventually rescued, but she was dead, along with his three daughters, ages 1, 3 and 10.

“Why are they bombing us?” he asked, standing in the wreckage of his home. “We are just refugees. This is a cruelty.”

Bits of torn bank notes from the 150,000 Pakistani rupees, roughly $800, in savings he kept in his home fluttered on the ground around him. Like others interviewed here, he said he had no connection to the Pakistani Taliban.

Around the same time that morning in the nearby village of Mandatah, a blast tore through the front of Qudratullah’s family home. His relative and neighbor Sadamullah, 21, ran to the house with his aunt, uncle and cousin, choking on smoke. He could make out the bodies of children laying on the lawn and red flames engulfing the family’s tractor and pickup truck.

But before Sadamullah could make sense of the scene, another blast hit the back of the house, throwing him on the ground. When he came to, he saw his cousin laying face down on the earth, legs covered in blood. His aunt and uncle were buried beneath the rubble.

“For almost 20 minutes my hands, feet and brain were not working, I lost control,” Sadamullah said.

Six days later, Qudratullah, his brother Zargit, and dozens of their surviving relatives gathered inside a large canvas tent to pray for the family members they had lost. All that was left of their home was a pile of rubble. The grill of their pickup hung from a tree branch, and the skull of a sheep from their herd sat in a puddle. On a hilltop nearby, white flags and 27 piles of stones sat atop a fresh mass grave.

Twenty-seven members of one family were buried in a mass grave in Mandatah. It was marked with white flags and 27 piles of stones.
Tags
Afghani̇stan Home Tali̇ban That Year