Good morning. Today we’ll follow the developments in Buffalo, where President Biden joined in the mourning for victims of the supermarket massacre. We’ll also look at how new congressional district maps would pit some New York Democrats against each other. 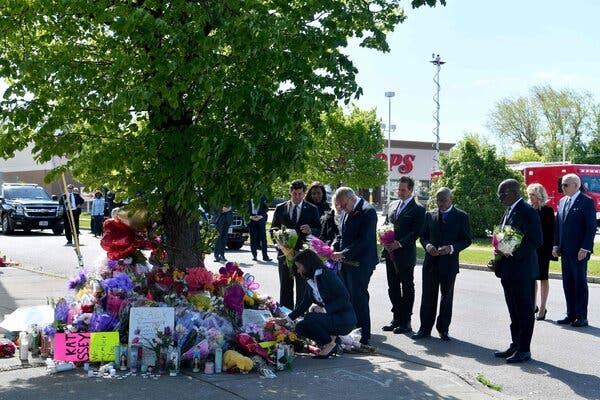 President Biden went to the largely Black community in Buffalo where a massacre at a supermarket left 10 people dead and made a terse declaration. “What happened here is simple and straightforward: Terrorism. Terrorism. Domestic terrorism,” he said.

Biden took time to describe each of the victims — he choked up as he said one was a father visiting the supermarket to buy a birthday cake for his 3-year-old son — and he did not shy away from calling the attack “racist.” But my colleagues Zolan Kanno-Youngs and Peter Baker write that the challenge for a president who came to office preaching unity may be how to take on those preaching hate.

Biden called on Americans to “reject the lie” of racial replacement that is said to have prompted the 18-year-old suspect to attack shoppers in a supermarket. “I condemn those who spread the lie for power, political gain and for profit,” the president said. “We can do this if we resolve to do it, if we take on haters and those who don’t even care. It’s just about profit and politics.”

The so-called replacement theory holds that elites want to disempower and “replace” white Americans with immigrants from Africa, Latin America and the Middle East. It has been a theme of Tucker Carlson’s nightly program on Fox News, although Biden did not mention Carlson by name. He described replacement as “a hate that, through the media and politics, the internet, has radicalized angry, alienated and lost individuals.”

Nor did Biden single out Carlson later when reporters asked if Carlson or some Republicans deserved blame for promoting replacement. “I believe anyone who echoes the replacement is to blame,” he said.

Beyond calling for a revival of an assault-weapons ban, the president made no policy announcements in a speech delivered not far from the supermarket the gunman attacked on Saturday.

He told reporters that there was little he could do on gun control through executive action and that he needed to “convince the Congress” to take up stronger gun laws — which, he acknowledged, would be “very difficult.” Lawmakers in New York are reviewing ways to bolster the state’s gun laws, which are already some of the nation’s most restrictive. Gov. Kathy Hochul is expected to announce a package of proposals as soon as Wednesday.

But there is a gun-buying boom in the United States. Since 2000, gun manufacturers have nearly tripled the number of firearms they make each year.

As Biden delivered his speech in Buffalo, some Black residents wondered whether the area would receive the same kind of attention after the next tragedy occurred somewhere else. Shaniah Paige, 39, noted that it took until this year for lynching to become a federal crime and said she did not expect meaningful change to come soon.

“When we’re down, we get free food and photo ops,” she said. “But this is embedded in decades of laws: America was built on racism.”

Expect increasing clouds with temps near the low 70s during the day. At night, prepare for a chance of showers. Temps will drop to the high 50s.

New York’s once-in-a-decade redistricting began with a gamble by Democrats to marginalize Republicans and gain as many as three additional House seats. It now appears likely to end in a distinctly different way, with intense Democratic infighting.

That is a consequence of a decision by the state’s highest court that invalidated the maps the Democrats had drawn for new congressional districts. Representative Sean Patrick Maloney, who has represented a district that includes Poughkeepsie and Newburgh since 2013, warned even before the ruling was handed down that such a decision would be “an extinction-level event,” according to three people who attended a private meeting at which he spoke.

[Fearing ‘Extinction-Level Event,’ N.Y. Democrats Turn Against Each Other]

The court appointed Jonathan Cervas of Carnegie Mellon University in Pittsburgh to draw new maps, which were released on Monday. I asked my colleague Nicholas Fandos to explain what happens next.

The maps that Cervas drew don’t look like the maps the Democrats approved. What’s the upshot?

No, they don’t. The map adopted by the Democratic-dominated Legislature would have given Democrats a clear advantage in 22 of 26 seats, setting them up to flip three current Republican seats blue. These new maps may give Democrats more like 15 safe seats in a Republican-friendly year like 2022, while creating five safe Republican seats and a half dozen tossups. One of the most notable changes: Cervas’s map would return the Staten Island-based district of Representative Nicole Malliotakis, a Republic, to its more conservative form. The Democrats had tried to solder Park Slope onto it to turn it blue.

The new maps are unsparing for incumbents. At least five of them were drawn out of their districts, including Representative Hakeem Jeffries, a potential speaker of the House. But what happened in Manhattan?

This was one of the most surprising aspects of the new maps. And it is likely to set up two big primary battles around New York City in the coming months between Democratic incumbents.

The most striking is in Manhattan, where Democrats Jerrold Nadler and Carolyn Maloney have been drawn together into one district after serving side by side for 30 years.

Neither is backing down. Nadler and Maloney both declared on Monday that they would seek election in the same district, despite pleas from allies to retire or run elsewhere.

For Jeffries, how much of a problem is running in a district you don’t live in?

Candidates are not required to live in the district they represent. Someone as well known in the community as, say, Jeffries or Representative Grace Meng of Queens can most likely still run and win. But it certainly creates another layer of confusion for voters, potential challengers and even the candidates themselves as they figure out how to try to explain and navigate this.

In the case of Representative Mondaire Jones, who was drawn out of most of his district in the lower Hudson Valley, the calculus could be more difficult. Jones is now in the district currently represented by fellow freshman progressive Jamaal Bowman. If he wants to stay in Congress, he may have to challenge him in a primary or challenge Sean Patrick Maloney, who wasted little time declaring his candidacy for territory to which Jones currently lays claim.

It was a warm Fourth of July in South Ozone Park, and my family and I were having our annual barbecue. After preparing the hot dogs, rice and potato salad and barbecuing the chicken, we sat down to eat, and I started pouring drinks.

It wasn’t until I filled the cups that I realized we were out of ice. My mom said to run to the corner deli to get a bag or two before they ran out. I grabbed my wallet and darted off.

When I got to the deli, I grabbed two of the four bags that were left, put them on the counter and handed the owner a $20 bill.

He said he didn’t have any change.

I said that was fine, he could keep the coins.

I was confused and frustrated.

“Bro, how do you run a deli and not have dollar bills?” I yelled.

“Could you just help me out a little and let me have it?” he said with a shrug.

I was so stunned that I didn’t bother to argue. I just left with the ice. I was out $5, but the drinks were getting warm.

Melissa Guerrero and Ed Shanahan contributed to New York Today. You can reach the team at nytoday@nytimes.com.

‘I could not stay away’: With Russians pushed back, residents return to Kharkiv.

Russia hits Ukraine with over 40 missiles, including in areas that were recently spared.

Agents Are Blocked From Using Discretion in Deportation Arrests

Featured Posts
How G.O.P. Support for Decriminalizing Abortion Faded Over Decades
26 mins ago

As Wimbledon Begins, an Era of Sports Free of Bans and Boycotts Ends
7 hours ago