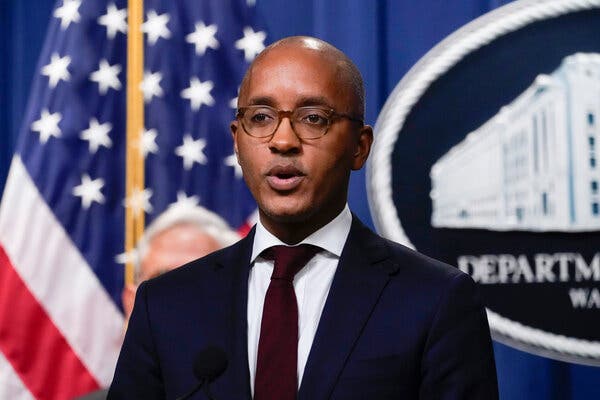 Damian Williams, the top federal prosecutor in Manhattan, will be one of the investigators.Credit…Carolyn Kaster/Associated Press

The Police Department’s Special Victims Division, the real-world sex-crimes unit mirrored by the one on the long-running television drama “Law & Order: SVU,” is the subject of a sweeping federal investigation of “deficiencies” that have “persisted for more than a decade,” the Justice Department said on Thursday.

The division has long faced troubling accusations from people who reported assaults. Now prosecutors in New York and Washington will investigate allegations of officers “failing to conduct basic investigative steps and instead shaming and abusing survivors and re-traumatizing them during investigations,” according to the Justice Department.

My colleagues Ashley Southall and Troy Closson write that the federal investigation is the latest setback for the Police Department, which is already under consent decrees governing its stop-and-frisk and surveillance practices. And Letitia James, the state attorney general, is seeking to have a monitor appointed to oversee changes in the way the department handles protests because of abuses during the George Floyd social justice demonstrations in 2020.

The Justice Department announced its investigation — the first centered on claims of gender discrimination since Merrick Garland became attorney general last year — 10 months after more than a dozen victims signed a letter calling for such an inquiry. Many of them had spoken out about experiences with investigators who lacked the sensitivity and the time to handle their cases properly, even after the #MeToo movement prompted a nationwide reckoning on rape in 2017.

Several months later the Police Department, already facing scrutiny of its handling of sex-crimes allegations against the Hollywood producer Harvey Weinstein, resisted the findings of a 2018 report from the city’s own Department of Investigation. That report said that the Special Victims Division was “understaffed and under-resourced.”

The city investigators also found that found that some detectives were dismissive of victims’ stories and that some “acquaintance rape” cases were sent to local precincts, which left responsibility for follow-up work after an arrest with “precinct-level detectives who are not trained in sex-crimes investigations.”

Police officials initially refused to accept many of the recommendations in that report, and while they later changed course, many of the suggested reforms have yet to be adopted.

Mary Haviland, former executive director of the New York City Alliance Against Sexual Assault, said that the Justice Department investigation “had to happen” and could only be conducted at the federal level.

“The N.Y.P.D. has never taken responsibility for doing the right thing for sexual assault survivors,” she said. Police commissioners over the years “promised us that there would be change, but the performance of the division has declined.”

Keechant Sewell, the police commissioner, said in a statement on Thursday that she believed the Justice Department would find that the department “has been evolving and improving” its practices, adding that she aims for the sex-crimes division to serve as “the national model.”

Max Young, a spokesman for Mayor Eric Adams, said in a separate statement that City Hall welcomed the review and would continue taking steps to “fix problems that have been decades in the making.” He added, “There is no higher priority for law enforcement than ensuring that victims of sexual assault get the justice they deserve and the care, support and treatment they need.”

Expect a sunny day with temperatures in the low 90s. Late at night, there will be a chance of showers and thunderstorms.

In effect until Monday (Independence Day).

Planning a transformation of Penn Station

Last year, after Gov. Kathy Hochul of New York said that Pennsylvania Station should be named for a New Yorker rather than a “neighboring state,” someone on Twitter called it the “If Hell Had a Hell” Station. As my colleague Patrick McGeehan wrote recently, nearly everyone agrees that something needs to be done to fix the chaos (and maybe the griminess and grubbiness) at the nation’s busiest transit hub. The question is, what? I asked him to bring us up to date on possible renovation plans.

Amtrak just awarded a design contract for a $12 billion expansion that calls for demolishing an entire block of Midtown Manhattan, including a church that’s more than 150 years old. What does Amtrak want?

To add several tracks and platforms to Penn Station, to accommodate additional trains that would arrive through a new tunnel under the Hudson River. The tunnel would be built as part of the massive Gateway project being planned by Amtrak and transit agencies in New York and New Jersey.

If it ever is completed, the tunnel would effectively double the number the trains that could cross the river between the two states.

For now, there is nowhere for those trains to go in New York City. Amtrak has proposed building about eight tracks beneath the block south of the station. That block is filled with buildings, including St. John the Baptist Roman Catholic Church, that would probably have to be demolished.

But a separate New York State plan has run into opposition from community leaders. What does the state want?

Amtrak’s expansion of Penn Station was supposed to precede a renovation of the station. But Hochul, who has called Penn Station a “hellhole,” did not want to wait. She pressed for the renovation first, before the Amtrak expansion.

Her plan, similar to one proposed by her predecessor, Andrew Cuomo, is to allow developers to build several supertall towers around Penn Station in exchange for payments that would help cover the cost of the renovation. The plan has run into opposition from community groups, who have questioned the need for the office buildings and the viability of the financing.

Are Amtrak and the state on the same page? Can the opponents stop or stall either Amtrak or the state?

Amtrak’s main concern is getting Gateway finished, so its executives have agreed to New York’s insistence on fixing up the station before expanding it. But both plans are counting on some federal funding and still have to be reviewed by federal agencies. That process involves taking input from the public, so a critical mass of objections from community groups could still derail either plan.

How overburdened is Penn Station?

Penn Station has long served many more commuters than it was designed to handle. Its platforms and stairways were built decades before double-decker trains carried so many passengers. Before the pandemic, more than 600,000 people passed through the station every weekday. The scrum of commuters trying to board their trains home every evening was daunting.

How soon might renovations begin, and how much will they add to the daily headache of commuting through Penn Station?

The actual work of the renovation won’t begin for at least a year. By the time it starts, Penn Station could be nearly as busy as it was before the pandemic, and all of the construction would have to be done while commuters are rushing on and off trains every day. In short, things will probably get worse before they get better.

Two summers ago, I was on a tourist’s visit to the Statue of Liberty when I began to feel overwhelmed.

On the return trip to Manhattan, rather than joining my son in sightseeing, I sneaked down beneath the ferry’s stairwell to take a nap, and the engine’s hum lulled me to sleep.

Glad we could get together here. See you on Tuesday. — J.B.

Why Judges Keep Recusing Themselves From a N.Y.C. Vaccine Mandate Case

Saudi Arabia Bankrolls a Challenge to the PGA Tour 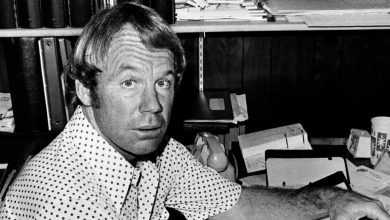 Featured Posts
‘80 for Brady’ Review: Remember These Titans
8 mins ago

Bobby Beathard, Mastermind of N.F.L. Dynasties, Dies at 86
20 mins ago

John Adams, Who Banged His Drum Loudly in Cleveland, Dies at 71
32 mins ago

Tom Brady’s Last Season Didn’t Go as Planned. Was It Worth It?
44 mins ago

Hard Drinking and Murky Finances: How an American Veterans Group Imploded in Ukraine
56 mins ago