For mothers during the pandemic, the usual push and pull of work and family life has felt more like a tug of war. Yet despite concerns that they would quit their jobs en masse, most succeeded in keeping them, two new data analyses show.

In fact, one group of mothers — college graduates with babies and toddlers — became significantly more likely to work for pay than they were before the pandemic.

As of March, slightly more mothers of school-aged children are working than they were in the March before the pandemic.

It is a testament to American women’s attachment to the labor market, researchers said — they have hard-earned careers, built over time and central to their identities, and are increasingly primary breadwinners for their families. It also speaks to the value of flexibility over when and where people work.

“The real story of women during the pandemic is that they remained in the labor force,” Claudia Goldin, a Harvard economist and leading scholar of women and work, wrote in one of the new analyses. “They stayed on their jobs, as much as they could, and persevered.”

Still, they were stretched thin — and many still are. Child care, after-school care and summer camps are not back at capacity; people are still getting Covid; and for some mothers, the reopening of schools gave them a chance to pause and realize how overwhelmed they were.

“I’m looking around and being like, Why do I feel so stressed out this year while my kids are in school?” said Rebecca Bird Grigsby, a training coordinator at a gaming company, a working artist and a mother of two. “There’s the expectation that things should just go back to normal, that I can work at full capacity, I can focus on professional development, the kids will be fine. And that’s not necessarily true.”

The share of mothers living with children 5 to 17 who are actively working was 1.7 percent higher in March than in March 2019, found the second analysis, by Misty L. Heggeness, a principal economist at the Census Bureau. The exception is mothers living with children under 5. The share at work is down 4.2 percent, most likely because of acute child care shortages this year. Centers have been unable to hire enough teachers, and because children under 5 can’t yet be vaccinated, there are many more interruptions for illness and quarantines. This has made it particularly difficult for mothers without college degrees to work.

“There are nearly 1.2 million extremely qualified women who haven’t returned to the work force,” President Biden said at a union event last month. “There’s a simple reason: There’s no affordable child care for them.”

Samantha Rogers is a single mother of three boys under 6 in Cookeville, Tenn. She works part-time cleaning hotel rooms for $7.25 an hour, but that’s not enough to rent an apartment. They bounce around and have spent a few nights outside. Yet she can’t get a full-time job — like the one she had before the pandemic, earning $15 hourly at a factory — without child care.

Nearby child care centers have long wait lists and tuition she cannot afford — $2,000 a month for her three children. Instead, her older children attend a free Head Start preschool, but it ends at 3 p.m., so she can’t work full days. Her sister watches her baby while she works, but Ms. Rogers can’t work when her sister is unavailable — and her boss said she would lose her job if she missed more than five days a year.

“It makes it so much harder when you really just want a stable place for your kids, but you can’t afford it because you don’t have anywhere for your kids to go so that you can afford it,” she said.

Working mothers’ resiliency does not mean the pandemic and recession were not extraordinarily difficult for them. In April 2020 — with the economy and schools shut down — the share of mothers actively working with school-aged children at home dropped 22 percent from the year before. The time parents spent on child care doubled, and women shouldered most of it. They also disproportionately held the jobs that were lost during lockdowns, like child and elder care or waitressing.

Black women without college degrees were hit hardest. They were overrepresented in service and caregiving jobs, and also more likely to get Covid or care for someone who did.

But overall, the notion of a so-called she-cession — that women lost jobs at a higher rate than men — was not borne out. Gender was not the main differentiator in who lost work, Professor Goldin found. Education was. For women as well as men, those without college degrees left work at twice the rate of college graduates. A major reason was that jobs requiring college degrees were much more likely to be able to be done from home. 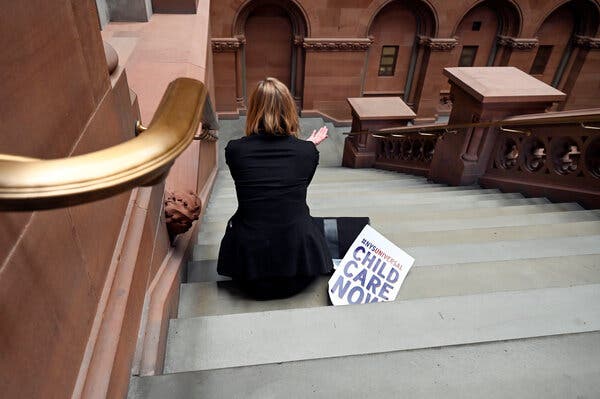 Child care center capacity has not rebounded to prepandemic levels, making life difficult for working parents, as a sign on the New York Senate staircase in March suggested. Credit…Cindy Schultz for The New York Times

Take mothers ages 25 to 34, who were likely to have young children in need of a high level of care. Comparing the hardest-hit months of April and May 2020 with the same months in 2018, the share of college graduates in this group who were employed declined 1.3 percentage points, from 84 percent to 82.7 percent. But the share of employed mothers without college degrees dropped 4.4 points, from 65.9 percent to 61.5 percent, Professor Goldin’s analysis found.

Remarkably, by last year, the employment of college graduate mothers of all ages with infants and toddlers increased from 2018 levels, particularly in the spring and summer of 2021, she found. It’s probably because they and their spouses were able to work from home, which gave them more flexibility on things like breastfeeding and child care schedules that don’t match up with office hours. Also, fathers’ time spent caring for babies increased 25 percent.

“Perhaps new mothers who would have left the labor force decided to remain in,” Professor Goldin wrote.

One reason people overestimated how much women’s employment plummeted in the pandemic was because there had been a run-up in the share of women working immediately prior, a period of very low unemployment. Comparisons to those months made the drop-off look larger and obscured the longer-term trend: The labor force participation rate for women 25 to 54 in the United States stalled in the early 1990s at about 75 percent, and has not changed much since.

Over the course of the pandemic, mothers’ work patterns have varied with the circumstances, including Covid waves.

Early on, those who worked in person at lower-paying jobs, like store clerks or health aides, were more likely to stop, because they couldn’t afford child care or were laid off.

Though white-collar workers were less likely to leave work overall, those who left did it later in the pandemic, probably because they were worn down by “intense and frequent interruptions from family members,” Ms. Heggeness wrote in another paper with Palak Suri of the University of Maryland.

The age of the children also made a difference. Early on, schools closed but many child care centers, run privately, quickly reopened, so parents of older children were most affected. This year, though, schools are open but child care capacity is down.

When schools reopened, fathers began doing less at home, Professor Goldin’s data shows. Many mothers fear that their careers have stalled and that they’re unqualified for raises or promotions because of their split attention the last two years, she wrote: “They have been torn between being a good parent and doing their own jobs, an issue that predated the pandemic but has been magnified.”

Ms. Grigsby, who works at the gaming company and lives in Oakland, Calif., moved from part-time to full-time work during the pandemic, even with her two children, ages 9 and 13, at home. Now, schools are open, though dismissal is at 1:30 p.m. on Wednesdays and after-school programs are still limited. Her husband has started going back to the office sometimes, and because her job has fewer meetings, she’s the default parent.

“While last year’s pain point is better, all these other pain points are coming back,” she said. “All these things supporting us are not what they were two years ago, which was already not what we really needed.

“So I’m trying to figure out, without quitting my job, what can I give. Something’s got to give.”

Tags
Can Children She That Who

The E.U. will no longer recommend that masks be required for air travel.