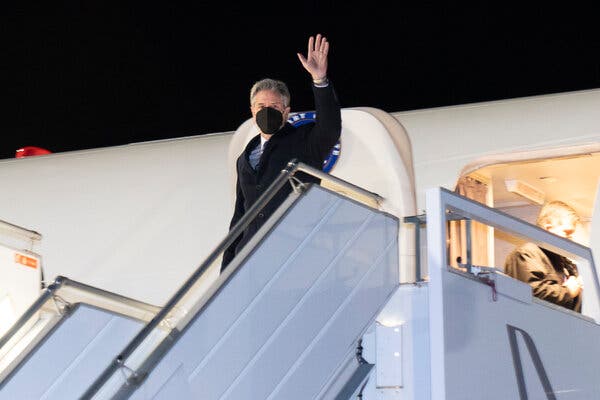 As Antony Blinken, the U.S. secretary of state, prepares to meet Sergey Lavrov, Russia’s foreign minister, in Geneva today, President Biden strengthened his warning to Russia about a potential attack on Ukraine. Any Russian troop movement into Ukraine would be taken as an invasion, he said, and he reiterated the threat of sanctions.

Biden’s remarks came a day after he prompted alarm by suggesting that a “minor incursion” by Russia into Ukraine could mean “we end up having a fight” with European allies about the appropriate response. Neither the U.S. nor Europe has detailed the exact steps that would be taken if the crisis were to escalate.

Though European and NATO officials were quick to play down questions of division, Emmanuel Macron, the French president, surprised and irritated many colleagues with an address to the E.U. Parliament in which he called on Europeans to come up with their own proposal on common security.

Quotable: A new incursion in Ukraine would be met by a “severe and coordinated economic response,” Biden said.

Lawmakers in Austria voted yesterday to make Covid vaccines mandatory for almost everyone 18 and over beginning Feb. 1, putting the country on a path to be the first in Europe with such a wide-reaching mandate. People who are pregnant or who cannot be vaccinated for medical reasons and those who have recently recovered from Covid would be exempt.

The government said it would begin routine checks of vaccination status in mid-March, in situations like traffic checks. Those who cannot immediately produce proof of vaccination will be reported to the authorities and could be fined up to 600 euros ($685). Contesting that fine could result in its increasing to €3,600, or about $4,000.

While Austria’s bill is the first of its kind, other European nations are pushing large segments of their populations to get vaccinated, through measures including the use of vaccine passports. Italy has made vaccines mandatory for those over 50, with fines for those who do not comply, and Greece has mandated vaccines for those 60 and older.

By the numbers: Austria’s current rate of vaccination is 75 percent, similar to the rates in France and Italy, and new cases are averaging 17,846 a day, according to a Times database.

Portraits of European Jews murdered during the Holocaust.Credit…Sean Gallup/Getty Images

Yesterday was the 80th anniversary of the 90-minute meeting — held in a villa on the Wannsee, a lake on the western edge of Berlin — in which the Holocaust was planned, alongside nibbles and cognac. There was only one point on the agenda: “The organizational, logistical and material steps for a final solution of the Jewish question in Europe.”

The anniversary has a special resonance as the number of survivors of the Holocaust dwindles and as antisemitism and the ideology of white supremacy become resurgent in Europe and the U.S. Four people were held hostage in a synagogue in Texas last week, and antisemitic crimes have also surged in Germany.

The minutes taken that day, written in the language of bureaucrats, do not explicitly refer to murder. They use phrases like “evacuation” and “reduction” and “treatment” — but there was never any doubt what they laid out: “The complete elimination of the European Jews,” as Joseph Goebbels, Hitler’s chief propagandist, wrote after reading them.

Texas synagogue attack: The F.B.I. has changed course on its earlier statement that the attack was not an act of antisemitism. “This was not some random occurrence,” the bureau’s director said. “It was intentional, it was symbolic, and we’re not going to tolerate antisemitism in this country.”

Related: The U.N. adopted an Israeli resolution that condemns denial and distortion of the Holocaust. Only Iran objected.

News From the U.S.

Delhi is growing far beyond its formal confines and could become the world’s largest city. But plans to accommodate that growth are incomplete.

India’s population growth hides a looming trend: People are having fewer children, across regions and income groups. In some parts of the country, fertility rates have fallen to — or have even dipped below — replacement rates. In the southern state of Kerala, people are having 1.8 children on average.

A towering force in fashion

André Leon Talley’s approach to fashion could best be described as “more.” More glamour, more decadence, more delight. He evoked drama in both his personal style — wearing capes and furs — and his declarations. “It’s a famine of beauty, honey!” he once proclaimed. “My eyes are starving for beauty!”

Talley, who died this week at 73, was a pioneering figure in fashion. Using his encyclopedic knowledge of fashion history and his quick wit, he became an editor, an author, an adviser and a TV personality. In the 1980s, he worked his way up to creative director at Vogue, and he spent decades at the magazine in various roles.

A 1994 New Yorker profile called Talley “the Only One” — a reference to his often being the sole high-powered Black editor in a field that is notoriously white. His influence is hard to overstate: He mentored the supermodel Naomi Campbell and helped dress Michelle Obama when she was first lady.

Growing up in the Jim Crow South, Talley wallpapered his bedroom with images ripped from Vogue. “I went to school and to church and I did what I was told and I didn’t talk much,” he told Vogue in 2018. “But I knew life was bigger than that. I wanted to meet Diana Vreeland and Andy Warhol and Naomi Sims and Pat Cleveland and Edie Sedgwick and Loulou de la Falaise. And I did. And I never looked back.”

Serve spicy and tingly beef over hot rice or simmered noodles and finish with a drizzle of Sichuan chile oil, if you’ve got it.

“The Gilded Age,” a period drama from the creator of “Downton Abbey,” features big mansions and big names.

Drawing can be a cure for the January blahs.

P.S. Here’s how we make our bursts, the tap-through story format that lets photos and videos shine.

The latest episode of “The Daily” is on Microsoft and the metaverse.

Sanam Yar wrote today’s Arts and Ideas. You can reach Natasha and the team at briefing@nytimes.com.

Tags
Covi̇d New York Over That Who