We’re covering the rapid global spread of the Omicron variant and the E.U.’s attempts to grapple with an illiberal leader. 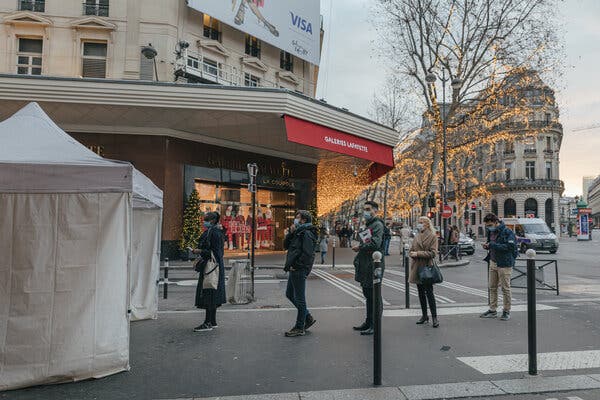 Lining up for rapid Covid-19 tests in Paris last week.Credit…Andrea Mantovani for The New York Times

Global coronavirus cases are now surging to levels far higher than at any previous point of the pandemic — with an average of nearly 1.5 million new cases every day — but recent data provide some encouraging news.

With that data in mind — and in an effort to lessen the load on hospitals without reinstating lockdowns — governments are now redoubling their focus on vaccinations and boosters, which are increasingly seen as the world’s ticket to “living with Covid.”

What’s next: In the U.S., Dr. Anthony Fauci, the government’s top infectious disease expert, said that hospitalizations were a more important indicator than reported cases of the severity of the Omicron wave.

Editors of Citizen News announced on Monday that they would cease operations in Hong Kong.Credit…Tyrone Siu/Reuters

With the closure of two news outlets in Hong Kong in just a few days, the Chinese government has effectively ushered in the demise of independent media in a city that once boasted some of the freest and most aggressive news media in Asia.

The two outlets, Stand News and Citizen News, were once part of a flourishing media that arose covering pro-democracy protest movements in Hong Kong. When the movement was stamped out by the new security law, the outlets turned their focus to the court cases against protesters and opposition politicians.

But such coverage has become risky. Jimmy Lai, who led the aggressively independent tabloid Apple Daily, was arrested in 2020 under a national security law aimed at quashing dissent. Last week, seven people connected to Stand News were arrested after hundreds of police raided its offices.

What’s next: The silencing of independent outlets has expanded the influence of Beijing’s publications, which are monitored for clues as to what the security services might do. When their attacks intensify, official actions often follow.

Viktor Orban, Hungary’s prime minister, proudly refers to his country as an “illiberal state.” Yet he has long been treated as just another leader by the European Union, which holds itself up as a model of human rights and the rule of law.

But as Orban has continued to consolidate power and weaken his country’s democratic institutions, the bloc is trying to rein him in. Early this year, the European Court of Justice will issue a decision on whether the union has the authority to make its funds to member states conditional on meeting the bloc’s core values. Doing so may block Hungary from billions of euros.

Interviews with current and former officials show how sentiments toward Orban have evolved from indulgence to recognition that he has become a serious internal threat.

Among those who had protected Orban was Angela Merkel, the chancellor of Germany at the time. German companies had major investments in Hungary, and Merkel saw Orban as a political ally in Brussels.

Quotable: A former aide at the European Council, which is composed of the leaders of the E.U. states, said that the council was “like a club, where Viktor is just one of them.” He added that the leaders “prefer not to deal with hot potatoes or each other’s business when they can avoid it.”

American ally: Donald Trump endorsed Orban for re-election. Orban was an early supporter of Trump, endorsing him in the summer of 2016 and again in 2020.

People celebrating in honor of the Hindu god Shiva at the Pashupatinath temple in Kathmandu, Nepal.Credit…Shelby Tauber

Every year, thousands of people gather at a temple complex in Kathmandu, Nepal’s capital, in honor of Shiva, one of Hinduism’s most revered gods. Here’s a visual exploration.

Lives Lived: Richard Leakey, a Kenyan paleoanthropologist and fossil hunter whose discoveries of ancient human skulls and skeletons helped cement Africa’s place as the cradle of humanity, died at 77.

Hades is the first video game in history to win a Hugo Award, the prize for science fiction and fantasy that has historically honored books, graphic novels and other written works.

The game, from the developer Supergiant Games, follows the story of Zagreus — son of the game’s eponymous god — as he tries to escape the underworld. Along the way, he fights all sorts of hellish creatures and meets a wide array of characters, including the gods up on Olympus. He also uncovers family secrets and gains perspective on why his dad has made seemingly unsavory decisions.

The Hugo Awards’ inclusion of video games, which organizers are considering making permanent, speaks to how far the medium has come. In the early days of Pong in the 1970s or the original Super Mario Bros. and The Legend of Zelda in the 1980s, technology limited how much text a game could include. Today, a game’s storytelling can be its primary selling point, whether it’s a high-budget science-fiction epic, like the Mass Effect trilogy, or an indie game made by a small team, like Celeste.

For more to play, here are the video games that got our colleagues through 2021.

These chicken wings come out of the oven as crisp as their fried counterparts.

A New Year’s resolution you can keep: Stop dieting and start savoring your food instead.

Sixteen notable books coming out this month, including new works by Carl Bernstein and Hanya Yanagihara.

That’s it for today’s briefing. See you next time. — Matthew

P.S. David Fahrenthold, who won a Pulitzer Prize in 2017 while reporting for The Washington Post, is joining The Times’s Washington bureau as an investigative reporter.

The latest episode of “The Daily” is about how the Omicron variant is counterintuitive.

German Lopez wrote the Arts and Ideas section. You can reach Matthew and the team at briefing@nytimes.com.

Tags
Game New Orban That Who

How Much for That Doggie in the Cubicle?