We’re covering Beijing’s race to keep Omicron away from the Olympics and meager results from talks between NATO and Russia. 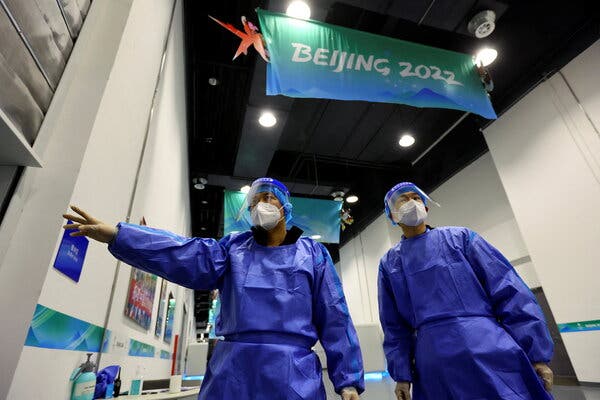 Members of a disinfection team for the Beijing 2022 Winter Olympics on Monday.Credit…Fabrizio Bensch/Reuters

What Omicron means for the Beijing Olympics

The Winter Olympics are just three weeks away, but tickets have yet to go on sale. Airlines are shifting schedules, creating travel confusion. Now, there is a spate of Covid outbreaks in China, including some cases of the fast-spreading Omicron variant of the coronavirus.

As of Wednesday, more than 20 million people remained confined to their homes in at least five cities around China. One especially worrying Covid flare-up is in Tianjin, a port city just 70 miles from Beijing.

The surge in infections even before the arrival of thousands of athletes, journalists and officials underscores the challenge Chinese organizers face in trying to hold the Games with extreme restrictions. The opening ceremony is scheduled for Feb. 4.

What’s at stake: For Beijing, the Olympics are an opportunity not only to showcase China’s athletic achievements but also to validate its “zero Covid” approach, said Yanzhong Huang, director of the Center for Global Health Studies at Seton Hall University. “If they can pull this off without causing any major outbreaks, it would be another gold medal that China would be happy to claim,” Huang said.

The latest: Officials urged people to refrain from unnecessary travel to the capital, but they say there are no plans to lock down Beijing.

Restrictions: The Games will be the most extraordinarily restricted large-scale sporting event since the start of the pandemic. Unvaccinated people will have to spend 21 days in Beijing in solitary quarantine. Fully vaccinated participants will remain in a tightly managed bubble.

Go deeper: Our columnist Li Yuan wrote about the army of millions who enforce China’s zero-Covid policy, at all costs.

A Ukrainian border guard on patrol near the Ukraine-Belarus border on Sunday.Credit…Tyler Hicks/The New York Times

Differences remain after talks on Ukraine

Russian and NATO officials said they remained far from agreement after four hours of talks in Brussels that the West had hoped would persuade Moscow to de-escalate tensions with Ukraine, where 100,000 Russian troops are massed at the border.

“Our differences will not be easy to bridge,” the NATO secretary-general, Jens Stoltenberg, said Wednesday at a news conference after the talks.

At a separate news conference, Alexander Grushko, a Russian deputy foreign minister, said: “I want to say that the discussion was rather honest, direct, deep and comprehensive. But at the same time it showed a great amount of divergence on fundamental questions.”

Russian representatives did not commit to pulling back the troops on the border with Ukraine, nor did they reject the demand, officials said. The U.S. and NATO allies offered Russia a series of further meetings on European security, and Russia indicated that, for now, it was not closing the door to diplomacy.

Divides: Russia has made a list of far-reaching demands, including that NATO pledge to halt further eastward expansion; agree not to admit Ukraine; and pull back its troops from NATO members bordering Russia. The U.S. and NATO allies strongly rejected them.

What’s next: How seriously is President Vladimir Putin contemplating full-scale war with Ukraine? No one knows, except perhaps Putin. And that is by design, writes our Moscow correspondent. Today, the talks move to Vienna, where Ukraine will have a seat at the table for the first time.

Prime Minister Boris Johnson of Britain apologized in Parliament on Wednesday for attending a Downing Street party in May 2020, as the government was telling people to stay home.

Johnson, who had not previously admitted to being at the party, acknowledged that his conduct had deeply offended the public, even as he insisted that the gathering did not breach his government’s regulations.

“I want to apologize,” Johnson said during an extraordinarily tense session. “I know the rage they feel with me and with the government I lead when they think in Downing Street itself the rules are not being properly followed by the people who make the rules.”

Backlash: Officials of the opposition Labour Party and the Scottish Conservatives leader, Douglas Ross, called for Johnson’s resignation. The Times of London called Ross’s comments “the largest divide yet between the English and Scottish Tory parties.”

With the new year, many try to re-examine their relationship with alcohol by abstaining from it for Dry January. But the emergence of the fast-spreading Omicron variant of the coronavirus has some people wondering: Is this month really the time to stop drinking entirely?

Lives lived: Michael Lang, one of the creators of the Woodstock festival, which drew more than 400,000 people to an upstate New York farm in 1969, died at 77.

A movie on climate change strikes a nerve

“Don’t Look Up” is one of Netflix’s most popular films ever. After it premiered in December, climate scientists took to social media and penned opinion essays, saying they felt seen at last.

In the movie, a planet-killing comet serves as a metaphor for the climate crisis, and the team of scientists frantically pushing for government action who are ignored for political reasons, profiteering and apathy stand in for climate scientists pushing for cuts toemissions.

Adam McKay, the film’s director, wants it to be “a kick in the pants” that prompts urgent climate action. Netflix partnered with climate scientists to share ways to take action, and cast members have pointed to climate legislation voters can support.

“I’m under no illusions that one film will be the cure to the climate crisis,” McKay, whose previous films include “The Big Short” and “Vice,” wrote in an email to The New York Times. “But if it inspires conversation, critical thinking, and makes people less tolerant of inaction from their leaders, then I’d say we accomplished our goal.”

This quick-braised chicken with greens gets its bite from hot pickled peppers and their brine.

If you’re taking melatonin to sleep, you might be using it wrong.

That’s it for today’s briefing. See you next time. — Melina

The latest episode of “The Daily” is about Russia and Ukraine.

You can reach Melina and the team at briefing@nytimes.com.

NATO and Russia Talk Frankly, but Past One Another for Now