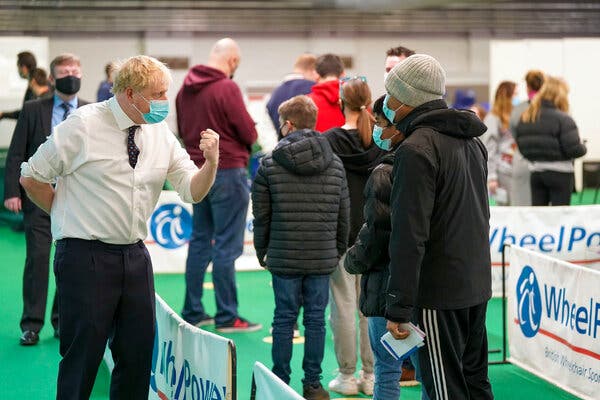 “We can find a way to live with this virus,” Boris Johnson, left, said Tuesday.Credit…Pool photo by Steve Parsons

Prime Minister Boris Johnson of Britain said yesterday that despite the record surge in coronavirus cases, the limited restrictions in England were the right approach and would be maintained.

“We have a chance to ride out this Omicron wave without shutting down our country once again,” Johnson said at a news conference, adding, “We can keep our schools and businesses open, and we can find a way to live with this virus.”

The prime minister said he would urge the cabinet to maintain the current coronavirus contingency measures, called Plan B, which were introduced in early December.

The plan includes mask mandates, guidance to work from home and the use of vaccine passes, but it falls short of lockdowns. Schools in England reopened Tuesday with masking and testing.

Hospitals are facing staffing shortages, and field facilities have been set up. Public transportation has been halted because of a shortage of workers. The National Health Service said it was on a “war footing.”

The numbers: A recent surge has added to the pressure to shut down. About 218,000 new coronavirus cases were reported Tuesday, and hospitalizations have continued to rise.

Leftists are on a winning streak in Latin America

First in Mexico, then in Bolivia, Peru, Honduras and Chile — and perhaps soon in Colombia and Brazil — leftist politicians have won presidencies, often defeating right-wing incumbents. This year, leaders from the left and the center-left are expected to be in power in the six largest economies in the region.

The trend has not extended to El Salvador, Uruguay and Ecuador. But Evan Ellis, a professor of Latin American studies, said that in his memory there had never been a Latin America “as dominated by a combination of leftists and anti-U.S. populist leaders.”

Yet these new leaders may find it hard to deliver on change. In contrast to the early 2000s, when leftists won critical presidencies in Latin America, the new officeholders are saddled by debt, lean budgets, limited access to credit and, in many cases, tough opposition.

Global effect: The left’s gains could buoy China and undermine the U.S. as they compete for regional influence, analysts say. The change could also make it more difficult for the U.S. to continue isolating leftist regimes in Venezuela, Nicaragua and Cuba.

Next test: In Colombia, where a presidential election is set for May, Gustavo Petro, a leftist former mayor of Bogotá who once belonged to an urban guerrilla group, is leading in the polls.

Tibetan and Uyghur protesters at the U.N. in Geneva on Tuesday.Credit…Salvatore Di Nolfi/EPA, via Shutterstock

With just one month before the start of the Winter Olympics in Beijing, concerns about China’s human rights record loom over the Games.

Activists and leaders have raised questions about China’s suppression of civil liberties in Xinjiang, Hong Kong and Tibet, but the International Olympic Committee has remained tight-lipped. Instead, the I.O.C. has consistently deflected calls to exert more pressure on China — a lucrative market and an important partner for the Olympics.

For months, rights activists have asked the Olympic committee to make sure that Beijing 2022 merchandise had not been made under duress by Uyghurs in Xinjiang. So far, the I.O.C. has been reluctant to do so, according to correspondence reviewed by The Times between the I.O.C. and an anti-forced-labor coalition.

Context: In years past, the I.O.C. had been willing to prod Russia about unpaid wages and Japanese officials about conditions for construction workers. The committee defended its approach in China.

Related: Tesla came under fire from political leaders and human rights groups after announcing it would open a dealership in the Xinjiang region.

The Molenbeek neighborhood of Brussels was where a terrorist cell planned attacks that killed 162 in France and Belgium in 2015. The area came under intense scrutiny, and its Muslim residents were often stigmatized. Six years later, Molenbeek is trying to reinvent itself as a trial takes place.

As he retires after 21 years as the chief classical music critic, Anthony Tommasini reflects on his first article for The Times: a deeply personal essay about a friend.

I was a freelance classical music critic for The Boston Globe. A close friend from my class at Yale, Bob Walden, was declining fast from AIDS, and I went to visit him in New York. I’d brought some chicken salad for lunch, though Bob, having shriveled to about 100 pounds, hardly ate. He died on Jan. 1, 1988, at 39.

Despite my sadness, maybe because of it, I needed to write about Bob. During this early, brutal period of AIDS, many were writing about the deaths of their gay friends. But music, specifically Mozart, would be a unifying thread of my article. Bob liked classical music, but used to think that Mozart was above him, which baffled me.

As we ate lunch on that fall day in 1987, a tape started playing Mozart’s consoling choral motet “Ave verum corpus.” As if chastising his own musical cluelessness, he said, “It’s so damn simple.”

That’s what I wrote about: Bob’s epiphany about Mozart seemed linked to insights he was making about life, as he approached death.

From then on, I kept writing profiles and interviews after joining The Times. And I learned that you can tell people’s stories by describing the music they create.

At Bob’s memorial at St. Michael’s, the organist played “Ave verum corpus,” a request Bob had made. That’s when I started to cry. As Bob learned, and taught me, sometimes things really are as simple as they seem.

Coated in panko and sesame seeds, this tofu takes on a splendid crunchiness that contrasts with sautéed spinach.

It’s possible to exercise too much. Here’s how to look for the signs of overexertion.

“Three Minutes: A Lengthening,” a documentary based on a home movie, captures Jewish life in a Polish town before the Nazis arrived.

That’s it for today’s briefing. Thanks for joining me. — Melina

The latest episode of “The Daily” is about flawed prenatal testing.

You can reach the team at briefing@nytimes.com.

Trump Cancels Jan. 6 Event, After Allies See It as a Distraction

This Is the N.F.L. Season That Ran Too Long